Please ensure Javascript is enabled for purposes of website accessibility
Log In Help Join The Motley Fool
Free Article Join Over 1 Million Premium Members And Get More In-Depth Stock Guidance and Research
By Leo Sun – Apr 2, 2020 at 7:47AM

The short-term pain of slower sales could precede some long-term gains for their e-commerce efforts in South Asia.

On March 24, India implemented a three-week lockdown for 1.3 billion people to curb the spread of the novel coronavirus (COVID-19) pandemic. The decision was made after projections indicated that up to 500 million Indians could be infected by the end of July and overwhelm the country's 0.7 hospital beds per 1,000 people. The U.S., which is already buckling under the pandemic, has 2.9 beds per 1,000 people.

Amazon and Flipkart recently resumed deliveries in several cities after taking measures to protect their delivery workers and customers, but both companies are still operating at limited capacities. Let's see how the lockdown could impact both companies' plans for the world's second-most-populous country. 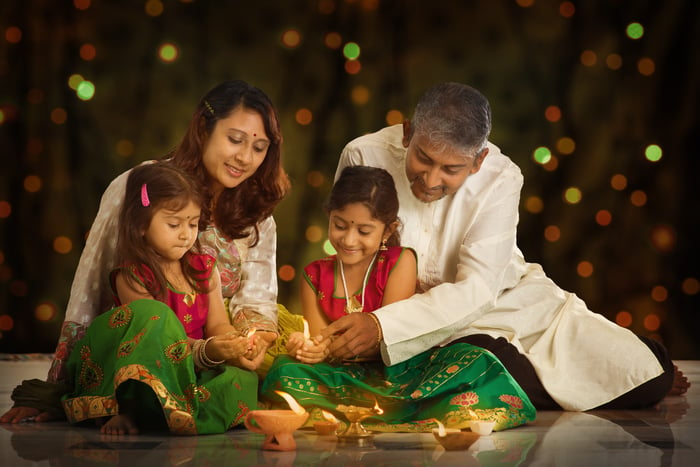 How much does India matter to Amazon?

Last year, Amazon generated 89% of its revenue from just four developed markets: the U.S., Germany, the U.K., and Japan. To diversify its business away from those slower-growth markets, Amazon entered new markets like China and India.

Its push into China largely flopped due to brutal competition from entrenched leaders like Alibaba (BABA 1.18%) and JD.com (JD -1.85%). In response, Amazon pivoted toward India, where most people still shop offline.

Morgan Stanley estimated that just 14% of India's internet users shopped online in 2016, but that percentage would top 50% by 2026. Amazon doesn't disclose how much revenue it generates from India yet, but it already shares a near-duopoly in the e-commerce market with Flipkart.

Amazon recently set aside $1 billion to help small-to-medium-sized retailers in India open online stores. It believes that investment will expand its Indian business and feed $10 billion in cumulative Indian exports by 2025 -- which would feed its third-party marketplace business for overseas buyers.

It also ramped up its investments for the Diwali shopping holiday, expanded its lineup of localized digital content for Prime members. and promoted its hardware devices in malls. Last June, Amazon claimed that it had doubled its Prime subscriber base in India over the past 18 months, and over half of those subscribers were in smaller cities.

How much does India matter to Walmart?

Unlike Amazon, Walmart successfully expanded into China with 438 stores and a thriving partnership with JD.com. However, it only operates 28 stores across India under its Best Price banner.

Instead of aggressively expanding that brick-and-mortar footprint, Walmart bought a 77% stake in Flipkart -- which also included the e-commerce platform Myntra and the digital payment platform PhonePe -- for $16 billion. Walmart also doesn't disclose its Indian revenue separately, but its growth in India and China could gradually reduce the weight of its aging U.S. business, which generated 77% of its revenue last year.

The Economic Times estimates that combined gross sales at Flipkart and Amazon surged 33% annually during last year's Diwali shopping period, with most of that growth coming from lower-tier cities and rural areas.

How will the lockdown impact both companies?

It's difficult to quantify the exact impact of the lockdown on Amazon and Walmart's Indian revenue. Both companies could either experience slower growth until the crisis ends or see an uptick in sales as brick-and-mortar stores remain closed. Over the long term, though, the crisis could benefit Amazon and Walmart in two ways.

First, Amazon and Flipkart were both targeted by Indian regulators prior to the pandemic, with proposed bans on exclusive sales with third-party merchants, bans on sales of products in which they owned equity interest (like Echo speakers), and restrictions on discounts and cashback offers. Those draconian measures were aimed at shielding smaller merchants, but regulators could relax those rules after the crisis if Amazon and Flipkart aid the country's recovery efforts.

Second, the lockdown could crush smaller retailers and e-commerce rivals, leading to market share gains for both Amazon India and Flipkart. In other words, its short-term pain in India could precede long-term gains, so investors should keep a close eye on this brewing battle in South Asia.