Please ensure Javascript is enabled for purposes of website accessibility
Log In Help Join The Motley Fool
Free Article Join Over 1 Million Premium Members And Get More In-Depth Stock Guidance and Research
By Rhian Hunt – Apr 2, 2020 at 11:31AM

The safety measures will be completely rolled out by sometime next week.

Amid a rising chorus of demands for action from concerned Amazon employees, union leaders, and politicians, Amazon (AMZN 0.41%) announced today it has begun using temperature checks and handing out masks to warehouse workers after the COVID-19 coronavirus sickened people at several of the company's facilities. Dave Clark, Senior VP of Worldwide Operations, provided details on Amazon's blog.

Clark noted Amazon was performing temperature checks at a few locations on Sunday, March 29. But now, the company is steadily increasing the fever screening's scope, taking the temperatures of approximately 100,000 workers as of today. It expects to be scanning all of its employees at locations, including Whole Foods, both in the USA and Europe by the start of next week. 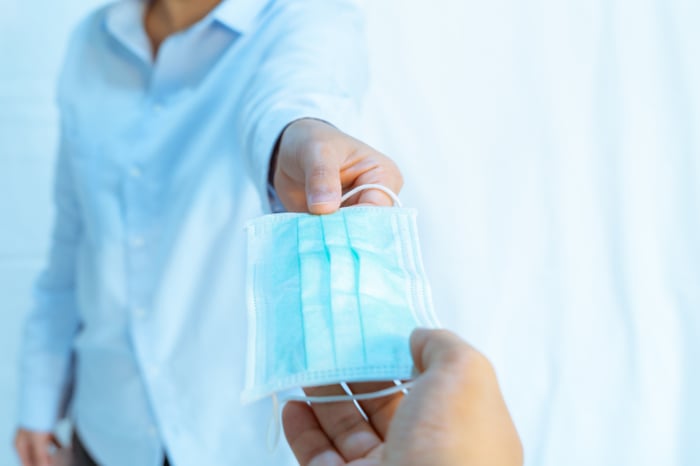 In keeping with CDC guidelines, any worker with a temperature of 100.4 degrees or higher will be sent home. They are to remain away from work until they have been fever-free for at least three days.

In an effort to improve worker safety and prevent the spread of coronavirus, the company also purchased "millions" of face masks several weeks ago. These orders have arrived and distribution of the masks to employees starts today at some facilities. Amazon expects masks to be available at all warehouses by early next week, simultaneous with the rollout of universal temperature scans.

The move comes after workers performed highly publicized walkouts at several Amazon locations, as well as the firing of Staten Island employee Chris Smalls, who started a protest against lack of safety measures on the job.

Amazon began preparations for the current mask distribution and temperature scans weeks before the walkouts and protests. It also claims Smalls was fired for violating quarantine and putting others at risk of catching coronavirus, not for activism.