Please ensure Javascript is enabled for purposes of website accessibility
Log In Help Join The Motley Fool
Free Article Join Over 1 Million Premium Members And Get More In-Depth Stock Guidance and Research
By Evan Niu, CFA - Apr 2, 2020 at 8:00AM

It's been a long and winding road, but New T-Mobile is here.

Nearly two years after initially announcing its blockbuster $26 billion megamerger, T-Mobile (TMUS -1.63%) has finally completed its acquisition of Sprint in a deal that will reshape the domestic wireless industry. The companies have spent the better part of the past two years trying to usher the merger through all the necessary regulatory hoops, including getting approvals from antitrust regulators, communications regulators, state utility commissions, and federal courts after a multistate lawsuit attempted to block the deal.

It's been a grueling process, and the wireless industry has now consolidated from four national carriers to three. 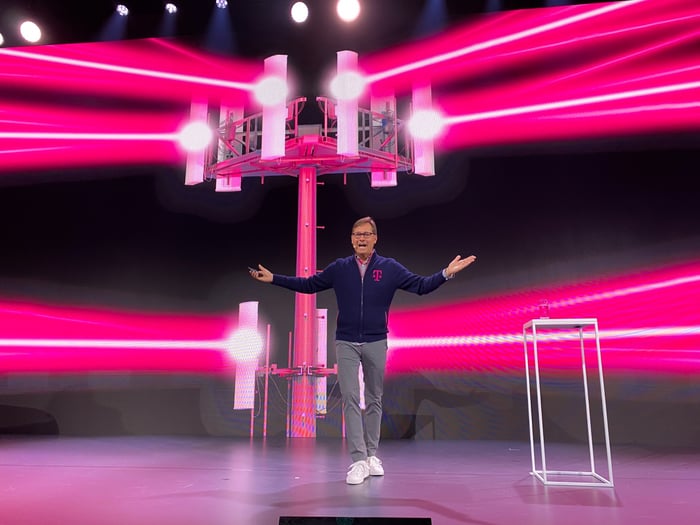 T-Mobile is committing to building a "transformative 5G network" now that the combined company will have a stronger spectrum portfolio. The company says that in six years it will have 14 times more capacity than it otherwise would have had as two stand-alone entities. That will help T-Mobile better serve rural communities while improving network speeds in urban markets.

The new company plans to invest $40 billion in its network over the next three years, while hoping to generate an estimated $43 billion in synergies. As previously announced, the deal's structure was tweaked because Sprint's business has deteriorated over the two years it took to secure all requisite approvals. Public investors still received the initial exchange ratio of 0.10256 T-Mobile shares for each Sprint share (equivalent to 9.75 Sprint shares for each T-Mobile share), while Sprint majority parent SoftBank surrendered 48.8 million shares to make its effective ratio 11.31 Sprint shares per T-Mobile share.

When I started the #uncarrier movement, the goal was to shake up wireless – and we DID. So much that I can't list everything we changed in a tweet! Between our history of disruption & Sprint's record as a challenger and customer advocate, the #NewTMobile has a solid foundation.

In connection with closing the acquisition, T-Mobile CEO John Legere will step down immediately. Widely credited with architecting T-Mobile's turnaround and disruptive transformation into the Un-carrier, Legere had confirmed last year that he would be leaving his post at the end of April 2020 and handing the reins over to COO Mike Sievert. The planned transition is just now happening slightly sooner than expected.

T-Mobile had given Legere a massive equity grant in 2018, initially valued at $37 million, tied to closing the deal. Half of those shares would vest upon closing, with the other half vesting on April 30, 2020. However, if the merger failed to close, all of the shares would have still vested on April 30, 2020, anyway, so Legere's package wasn't really at much risk to begin with. Legere will remain on T-Mobile's board of directors until the annual meeting this summer.

Sievert was also granted $20 million in stock, half of which just vested upon closing, with the other half vesting on April 29, 2021. (The new chief executive received a separate $13.5 million grant when the succession plan was made public last year.)

Separately, T-Mobile also announced a new proposed offering of senior secured notes. The private placement will not be available to public investors, and T-Mobile did not specify how much it was seeking to raise. The net proceeds will be used to repay a bridge credit agreement that provides a $19 billion term loan facility, with any remaining money allocated to general corporate purposes.