Please ensure Javascript is enabled for purposes of website accessibility
Log In Help Join The Motley Fool
Free Article Join Over 1 Million Premium Members And Get More In-Depth Stock Guidance and Research
By Adria Cimino - Apr 2, 2020 at 8:33AM

The apparel retailer was supposed to be on the mend after a difficult 2019 -- instead, like its peers, it faces an unprecedented new headwind.

The embattled apparel retailer started this year with high hopes. Sonia Syngal, CEO of Gap's strongest brand -- Old Navy -- took on leadership of the entire company, and investors tuned in to see if Syngal might replicate her previous success. That was before the coronavirus outbreak spread across the world, now totaling nearly 900,000 cases. 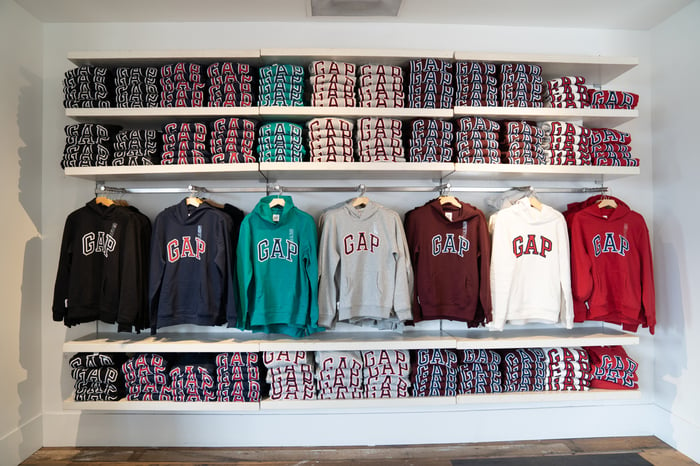 The pandemic has hit retail particularly hard as shoppers avoid public places and retailers shut down stores to protect employees and customers. Gap initially closed stores through April 1 but has extended the closure without giving a new timeframe. Though Gap and its peers are encouraging consumers to visit their e-commerce sites, many shoppers are focused on buying essentials instead of discretionary items like clothing and accessories.

Last week, Gap said it's taking precautionary measures to weather the crisis. Though the company ended fiscal 2019 with $1.65 billion in cash and equivalents -- above its historical range of $1.0 billion to $1.2 billion -- the company is drawing down the entirety of its $500 million revolving credit facility.

The company is also deferring payment of the first-quarter dividend, suspending the dividend for the rest of the year, and cutting capital expenditures by $300 million in fiscal 2020. And this week, management said it would furlough most of its store employees in North America until stores are able to reopen, in addition to cutting some corporate jobs. The leadership team and board of directors will take temporary pay cuts as well.

Syngal, in her first major move as CEO, is making a strong impression. Does this mean investors should be optimistic about Gap's recovery? Not yet. The company's fate will partially depend on Syngal's strategy to reverse the slide in comparable sales. It also will depend on how long the pandemic lasts and the state of the economy in the coming months.

In the fiscal fourth-quarter earnings call, Syngal said she and her team are working on a plan -- early priorities will include making "appropriate but prudent investments" that will result in long-term growth for the Old Navy and Athleta brands. Syngal didn't provide many details for the Gap Global brand, but she did mention the importance of "brand clarity."

Before the coronavirus crisis, headwinds included declines in mall traffic, where many Gap stores are located and fierce competition in the now essential online channel.

As for the length of the shutdown, China may serve as a guide. Response to the outbreak there became urgent in January, and the country is beginning to get back to business. We can hope that for other countries, the crisis will similarly span a few months. However, the post-crisis economy may have other plans. Recent weekly unemployment claims reached a record high of approximately 3.3 million. If that trend continues, even the end of the outbreak will not necessarily see shoppers returning to stores.

So will the coronavirus kill Gap's recovery? Probably not given the company's aggressive response, but the outbreak will make the turnaround efforts even more difficult and extend the timeline for investors. Though Gap shares are down 67% year to date, it's still too early to bet on the rebound for this apparel retailer.