It's only a limited test right now, but could become the new norm once any kinks are worked out.

As the coronavirus continues to spread, retailers continue to think creatively about ways to better protect their shoppers. Kroger (KR -2.08%) and Walmart (WMT -1.93%) have separately but almost simultaneously come up with the idea of one-way aisles within their stores to prevent patrons from moving past one another.

At least some Walmart stores in the U.K. and Canada have already implemented these traffic flow rules, with colored tape formed in arrow shapes on the floors showing patrons their predetermined path. Some stores even appear to have lines marked across an aisle every six feet, reminding shoppers to maintain what's become the preferred allowable closeness in an era of social distancing. A spokesperson for Walmart said earlier in the week the retailer was considering doing the same in U.S. stores. 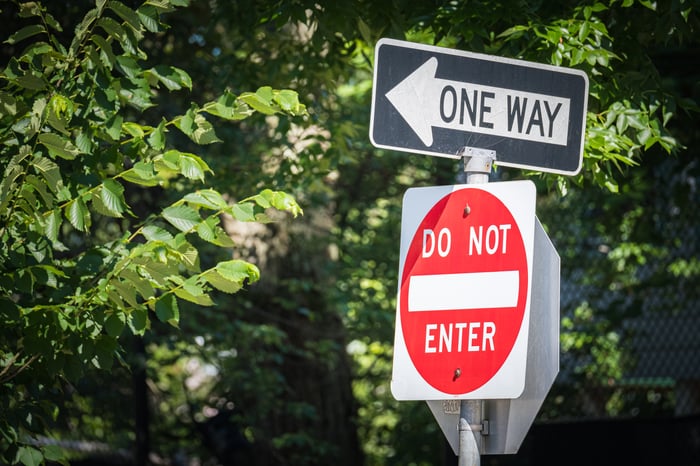 A Kroger spokesperson indicated this week that the grocer would be testing the idea in some of its stores as well, though it had not yet determined where.

These are hardly the only in-store efforts the two consumer staples titans or their peers are taking to protect customers and employees. Walmart as well as Kroger have installed plexiglass barriers between shoppers and cashiers to protect employees from infection. Walmart has begun taking employees' temperatures when they arrive in an effort to spot fevers, and has also begun distributing gloves to prevent direct contact with potentially infected surfaces. Employees of both retailers are also now allowed to wear masks at work. Kroger has even converted one of its stores near its Cincinnati headquarters to a pickup-only location as an experiment to determine how, or if, more stores could do the same.