Please ensure Javascript is enabled for purposes of website accessibility
Log In Help Join The Motley Fool
Free Article Join Over 1 Million Premium Members And Get More In-Depth Stock Guidance and Research
By David Haen - Apr 3, 2020 at 6:45AM

The stocks of drug developers can rise and fall on the release of clinical trial results, particularly if they are for the company's most advanced drug in development. When the results are positive, the stock will typically shoot up on the optimism, and bad news from the clinic can tank a stock.

Here, we will review the recently announced data for three drug developers to see if biotech investors should consider adding these companies to their portfolios. 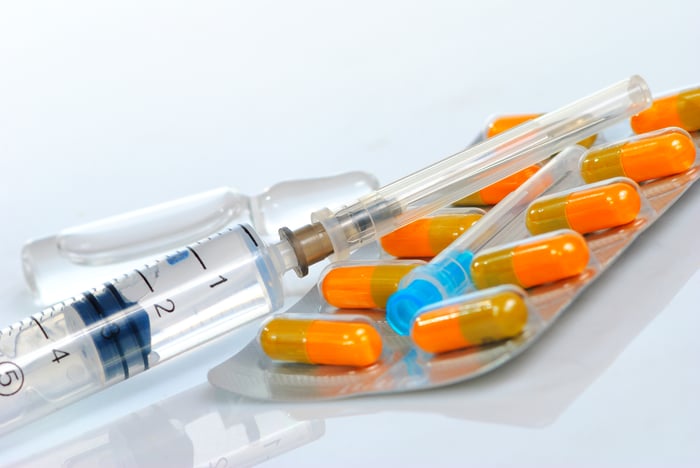 On March 30, Axsome Therapeutics (AXSM 3.49%) announced results from its phase 3 clinical trial with AXS-05 in patients with treatment-resistant depression (TRD). These are patients with major depressive disorder (MDD) who have failed two or more antidepressants. According to the National Institute of Mental Health, roughly 7.1% or 17.3 million people in U.S. live with MDD.

AXS-05 failed to achieve the primary endpoint of a statistically significant improvement compared with the comparator drug after six weeks of treatment. Several secondary endpoints were successfully achieved, demonstrating the drug's ability to show rapid benefit within the first week of treatment, and improving cognitive function and reducing anxiety symptoms.

Should investors be worried? No. First, AXS-05 successfully completed a phase 3 trial in MDD and remains on track to file for regulatory approval in the fourth quarter of 2020. Second, several positive signals were seen in the study, particularly the drug's ability to work quickly. These will help the company fine-tune the trial design for a second phase 3 trial in TRD slated to start in the third quarter. Lastly, Axsome plans to file for approval of its AXS-07 for migraine in the fourth quarter and expects results from a migraine study early this quarter.

Delivering an unbelievable 3,700% gain in 2019, Axsome's stock tumbled in the first quarter. It now trades around $55 per share, a far cry from $100 in December. With results from two phase 3 trials expected this quarter and two separate drugs-approval filings in the fourth quarter, Axsome looks to be an attractive, catalyst-rich biotech to own for risk-tolerant investors.

Shifting to a much smaller and earlier-stage data release, Immunovant (IMVT 2.08%) announced results from seven patients in its ongoing phase 2a proof-of-concept study in patients with thyroid eye disease. This relatively rare autoimmune disease, also known as Graves' eye disease, affects the muscles and tissues around the eye. The annual incidence in the U.S. and Europe is 16 per 100,000 females and 2.9 per 100,000 males.

Immunovant's weekly injected therapy IMVT-1401 reduced the disease-causing antibody by 65% on average. Four of the seven patients improved by two or more points on the clinical activity core, one of the trial endpoints, and three of the seven achieved a response in reducing bulging of the eye, medically known as proptosis. Additionally, no serious side effects were seen, and none of the patients dropped out of the study due to side effects.

Immunovant faces competition from specialty pharma Horizon Therapeutics (HZNP -0.19%). In January, the Food and Drug Administration approved Horizon's Tepezza, making it the first approved thyroid eye disease drug. Tepezza will gain market share while IMVT-1401 completes clinical development. However, IMVT-1401 could allow for at-home injections of the drug. Tepezza requires an I.V. infusion which must be done at a clinic. The convenience factor could be a winning proposition in the long run, even if the efficacy of both drugs looks similar.

Immunovant still has plenty of work to do. Tepezza filed for approval based on two trials with 170 patients. Immunovant started a phase 2b clinical trial in thyroid eye disease last November, which will enroll 77 subjects comparing IMVT-1401 to placebo. It will be interesting to compare these results to those from Tepezza. Ultimately, a head-to-head trial could be required, which sets up a winner-take-all (or at least most) scenario.

IMVT-1401's mechanism could apply to many other autoimmune diseases, so think of this as a beachhead indication with room to expand. Immunovant's early stage makes it a high-risk, high-reward investment.

MyoKardia (MYOK) presented data at the American College of Cardiology's 69th Annual Scientific Session on its phase 2 trial of mavacampten in patients with non-obstructive hypertrophic cardiomyopathy (HCM). This represents roughly one-third of all individuals with HCM, the most common genetic heart condition affecting one in every 500 people worldwide.

While the study's main objective was to determine safety and tolerability, the trial included exploratory efficacy endpoints. Mavacampten demonstrated highly statistically significant reductions in serum NT-proBNP, a marker of cardiac wall stress linked to higher mortality. After 16 weeks of treatment, mavacampten-treated patients had an average reduction of 53% compared to 1% for those receiving placebo. The reductions occurred during the first four weeks of treatment and maintained throughout the study.

MyoKardia's catalyst-rich 2020 plans will be impacted to a degree by COVID-19. On March 26, the company reaffirmed the second quarter timing for results from two clinical trials: A phase 3 with mavacampten in obstructive HCM and a phase 2a with a drug called danicamtiv for patients with stable heart failure.

MyoKardia's stock shifted into a downtrend in 2019, which continued in 2020. Its major pharma partner Sanofi (SNY 1.52%) walked away on Dec. 31, 2018, likely causing the change in sentiment. The company regained all rights to its programs and states it has enough cash, $430.3 million at Dec. 31 to be exact, to operate into mid-2021. It will need to raise more capital over the next year, which could keep pressure on the stock.

Each of these companies has its plusses and minuses. Axsome could be viewed as the least risky since it expects to submit its drugs to the FDA for approval by the end of this year. Immunovant has quite a bit of development to complete before IMVT-1401 can be filed with the FDA for approval. It also has the potential to work in a number of other autoimmune diseases. Lastly, MyoKardia aims to take on huge cardiovascular indications. The company will need more cash or a partner before it can cross the finish line. Like all investments, it depends on risk tolerance and investment horizon to determine if these biotechs fit in your portfolio.