Please ensure Javascript is enabled for purposes of website accessibility
Log In Help Join The Motley Fool
Free Article Join Over 1 Million Premium Members And Get More In-Depth Stock Guidance and Research
By Billy Duberstein - Apr 3, 2020 at 11:03AM

Usage went up, but advertising is down.

Shares of Facebook (META 1.70%) fell 13.3% in March, according to S&P Global Market Intelligence. The world's largest social media network was not immune to a global economic shutdown resulting from the COVID-19 outbreak, despite the company reporting higher use of all its apps while people shelter in place. 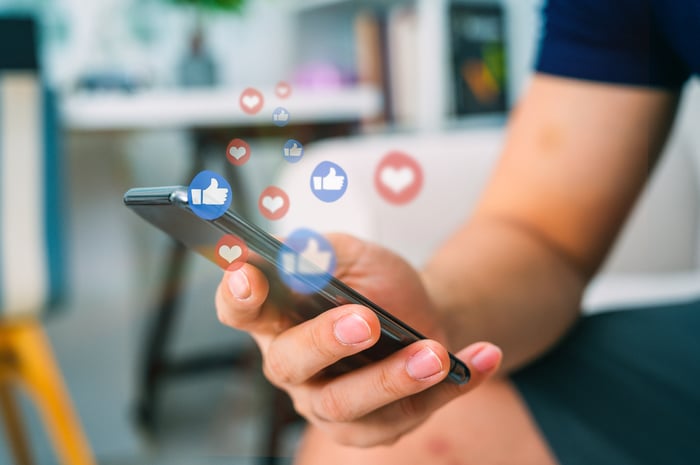 Most know the company as the owner of go-to social networks Facebook and Instagram, and messaging app WhatsApp, but it makes virtually all of its money from advertising. While Facebook has proved to be one of the most efficient outlets for advertisers large and small, it still needs healthy advertising clients with money to spend. Yet with much of the economy shut down due to quarantines, businesses of all kinds are pulling back on ad spending.

On March 24, Facebook published a blog post saying that it had seen extremely large spikes in activity across messaging and Facebook news feeds. But it also said, "We don't monetize many of the services where we're seeing increased engagement, and we've seen a weakening in our ads business in countries taking aggressive actions to reduce the spread of COVID-19." The company declined to say how much its revenue would be hurt.

Cowen analyst John Blackledge estimates digital advertisers could lose $45 billion in ad revenue relative to previous expectations in 2020. As one of the large digital advertisers, Facebook will definitely be significantly affected, which is why the stock is down.

But there's a chance Facebook may still achieve overall growth for the year. Research firm Magna Global expects overall digital ad revenue to grow 3.9% this year, down from previous estimates of 11.4%. However, this estimate prices in a strong recovery in the second half of the year, which may be optimistic.

Facebook currently trades at a P/E of around 25, though about 10% of its market capitalization is in net cash. Assuming the company can still eke out modest growth this year and then recover to its customary 20%-plus growth in 2021, the stock could be a long-term bargain. But the length of the slowdown, the effect on the economy, and the ripple effect on social media advertising are all still wild cards.

With so much uncertainty, Facebook stock could go either way in the near term, but it's still well positioned to survive the downturn.