Please ensure Javascript is enabled for purposes of website accessibility
Log In Help Join The Motley Fool
Free Article Join Over 1 Million Premium Members And Get More In-Depth Stock Guidance and Research
By Keith Speights – Apr 4, 2020 at 7:35AM

Both of these biotechs have promising coronavirus programs. But which is the better pick overall?

I, for one, am thankful that so many companies have shifted into high gear to fight the novel coronavirus disease COVID-19. Two of them that have received significant attention in recent weeks are Novavax (NVAX -1.99%) and Regeneron Pharmaceuticals (REGN -0.43%).

Some investors might think that there's no comparison between these two biotech stocks, considering that Regeneron is more than 70 times bigger than Novavax. Others might say there's no comparison between the two because Novavax has much greater growth opportunities and has smoked Regeneron in terms of stock performance so far this year. What's the real story as to which of these two coronavirus-focused biotech stocks is the better pick? 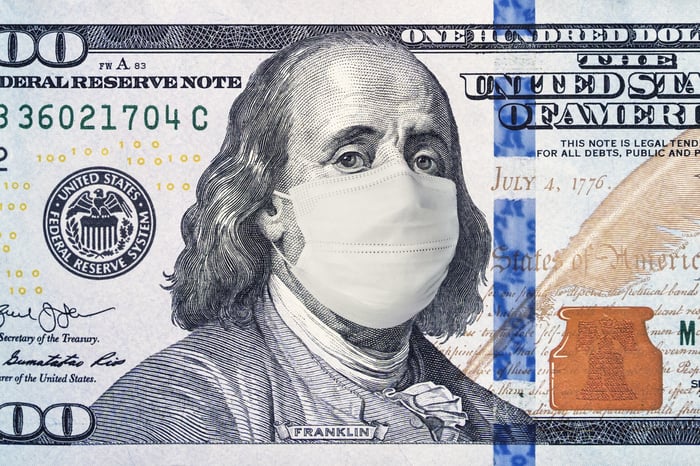 Novavax is no stranger to coronavirus research. The company has developed experimental vaccines in the past that showed promise in treating MERS and SARS, both of which are members of the coronavirus family. It only made sense, therefore, that the biotech leverage its expertise to try to develop a vaccine for the novel coronavirus that causes COVID-19. And that's exactly what Novavax has done.

It announced in late February that multiple COVID-19 vaccine candidates were being evaluated. The company plans to select the best candidate to advance into a phase 1 clinical study, expected to begin in May or June.

As encouraging as Novavax's coronavirus program is, though, it's not the biggest story for the biotech. That honor belongs to Novavax's experimental nanoparticle-based flu vaccine NanoFlu. The company reported overwhelmingly positive results on March 24 from a late-stage study of the vaccine in a head-to-head comparison against Sanofi's market-leading flu vaccine Fluzone Quadrivalent.

NanoFlu could be the game changer that Novavax has sought for a long time. Some analysts think that it's likely to generate blockbuster sales if approved. And while there's always a risk that the Food and Drug Administration (FDA) won't give a thumbs-up to NanoFlu, Novavax's chances of winning approval appear to be quite good.

The company also still has a shot at success for its respiratory syncytial virus (RSV) vaccine ResVax. The experimental vaccine has failed in a couple of late-stage studies, but Novavax believes that it still holds potential in treating infants via maternal immunization.

Probably the main knock against Novavax is that it's not profitable yet. That means the company will continue to burn through its cash for a while to come. Novavax had a cash stockpile totaling $82.2 million at the end of 2019 and has since raised another $156 million.

he biotech should be able to fund operations into 2021, but it's likely that Novavax will have to go to the well again to raise more money by issuing new shares not too far down the road.

Regeneron and its partner Sanofi have a drug already on the market that could be effective in treating some COVID-19 patients. The two companies are evaluating rheumatoid arthritis drug Kevzara in a phase 2/3 clinical study targeting severe cases of COVID-19. Kevzara inhibits a protein called interleukin-6 (IL-6), which could play a role in causing inflammation in the lungs of patients who are infected by the novel coronavirus.

In addition, Regeneron is scrambling to develop a cocktail therapy that could potentially be used as both prophylaxis before individuals are exposed to the novel coronavirus, as well as a treatment for those who have already been infected. The biotech is evaluating hundreds of virus-neutralizing antibodies to select the best two to advance into clinical testing in humans by early summer 2020.

In the meantime, Regeneron claims a couple of blockbuster drugs that continue to generate a lot of money for the company. Net product sales for eye-disease drug Eylea increased 12% year over year in 2019, while sales for atopic dermatitis drug Dupixent more than doubled last year.

Regeneron is also benefiting from strong growth for drugs that aren't blockbusters yet. Cancer immunotherapy Libtayo is picking up tremendous momentum. So is Kevzara in treating rheumatoid arthritis.

Unlike Novavax, Regeneron is already generating strong profits. And with nearly $6.5 billion in cash and marketable securities on hand as of the end of 2019, the biotech doesn't have to worry about running out of money.

There's no question that Regeneron is a safer choice than Novavax. But I think that Novavax is more likely to be the bigger winner in terms of stock performance over the next few years.

My view is that NanoFlu will win FDA approval, providing a major catalyst for Novavax. I suspect that the analysts who project the vaccine could generate at least $1 billion in peak annual sales will be proven right. Novavax faces several risks that Regeneron doesn't, but I like the small biotech's risk-reward profile for now.