The venerable Nike has more attractive prospects than Under Armour.

In deciding where to invest, the choice between Nike (NKE -1.55%) and Under Armour (UA -2.06%) (UAA -1.93%) is clear-cut. Their paths have clearly diverged, with one going in the right direction while the other has stumbled.

The upstart Under Armour started in 1996 with a shirt that kept you cool when you sweated. Since then, the company has expanded its apparel line to encompass clothing that protects wearers from both heat and cold. It has also entered the footwear market.

Under Armour achieved success, and it was a promising growth stock for a while, but competition, including from Nike, has encroached on its sales. Founded in the 1960s, Nike has proved it has staying power, achieving phenomenal success.

It is more than just Nike's history that gives it a leg up, though. 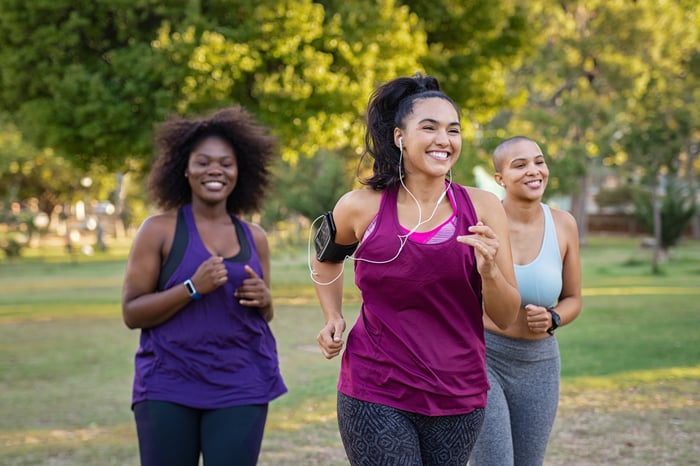 Nike designs and sells a range of footwear, apparel, equipment, and accessories for various sports and fitness pursuits. While Under Armour has mainly stuck to its knitting with body-temperature-regulating gear, Nike has continued to push innovation and has tried to attract more women, including offering items such as yoga pants. It even offers a line of clothing, Dri-FIT, that is designed to keep you dry by wicking moisture away from your body. This is right in Under Armour's wheelhouse.

In other words, Nike has continued moving ahead and adapting, a must to survive in business. No wonder the company has been around for more than five decades.

Under Armour operates on a calendar basis, so the time periods don't match up exactly. But its revenue growth is demonstrably slowing. Revenue surged from just under $4 billion in 2015 to $4.8 billion in 2016, but there has been a marked slowdown since then. For instance, top-line growth was only 1.4% last year, with revenue reaching $5.3 billion. Moreover, GAAP diluted earnings per share fell from $0.53 in 2015 to $0.20 last year.

Don't mess with the feds

In November, The Wall Street Journal reported that Under Armour was under investigation by both the Securities and Exchange Commission (SEC) and U.S. Department of Justice (DOJ) regarding accounting practices related to how it recorded revenue. Specifically, the story said that the agencies are looking into whether Under Armour improperly shifted sales from one quarter to another.

The company issued an official statement, which read in part: "As we have stated previously, we firmly believe that our disclosures and our accounting practices have been entirely appropriate."

I'm not suggesting any wrongdoing, and perhaps nothing will come of the investigations. But the presence of them makes me uneasy. Additionally, the company did not mention that the SEC and DOJ had been conducting investigations since July 2017 until the Journal's report, which is not exactly a feather in management's cap.

This adds another layer of risk to Under Armour that Nike doesn't possess.

While a company's financial strength is always noteworthy, it takes on particular importance during stressful economic times. Of course, with the coronavirus causing unemployment rolls to rise at an unprecedented pace -- there have been millions of new claims in each of the past two weeks -- consumer goods companies will face the consequences as discretionary spending is curtailed. Under these circumstances, the benefit of a strong balance sheet cannot be stressed enough.

Despite the turmoil in the market, Nike recently issued $6 billion of debt to increase liquidity. True, Nike's debt went from $3.8 billion (29% debt/total capital) to $9.7 billion (51% debt/total capital), but it will have more cash as a buffer during these challenging times.

Meanwhile, Moody's recently cut Under Armour's credit rating by one notch from Ba1 to Ba2. The rating agency cited weak performance and the effects of the coronavirus on consumer spending. Nike's rating is a very strong A1.

Nike's and Under Armour's results will feel pressure from store closures and lower consumer spending, naturally. A healthy balance sheet should carry Nike through these rough times, and, over the long term, compelling product offerings should see its shareholders happier owning its shares rather than Under Armour's stock.