Wouldn't you love a pair of stocks you can buy and forget right now?

Nothing tests your willingness to hold onto stocks like a bear market, especially the one we've been in for the past few weeks. There's been record volatility through March, with indexes moving by double-digit percentages on some days. Entire sectors like retail, restaurants, cyclicals, and energy have imploded, and even though stocks have recovered some of their earlier losses with the help of a $2 trillion rescue package from Congress, the peak of the coronavirus epidemic is still yet to come. Meanwhile, the full extent of the economic damage from the crisis is still unclear.

Still, that doesn't mean that now is a time to sell your stocks. The recent recovery shows that no one knows when the market will hit bottom. In fact, now looks a great time to add to your forever stocks, companies you know will stand the test of time. Here are two stocks that I don't plan on selling. 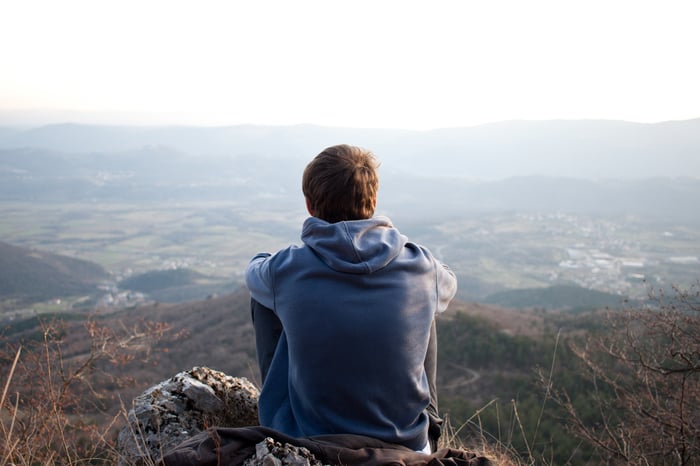 There's no question that Starbucks (SBUX -0.62%) is getting hit hard by the COVID-19 pandemic. The company was first forced to close about half of its stores in China, and has had to limit itself to takeout and delivery across North America as the pandemic spreads in its home market.

However, even in the worst of circumstances, Starbucks still seems primed to outperform its competitors. First, the company has built an enviable loyalty program with 18.9 million Rewards members in the U.S., as well as a strong digital business with its mobile order and pay program. Starbucks also separates itself from many of its peers through its commitment to generating value for all stakeholders, including employees. The company has consistently been ahead of its competitors in areas like employee pay and benefits, health insurance, and college assistance. Starbucks even recently announced a mental health benefit for employees, while many employees at other restaurants have no health insurance or paid leave.

That commitment to its employees and its approach to stakeholder value is especially key in a crisis like this, as it will lead to increased employee loyalty and make the company stronger. Though Starbucks is losing a significant volume of its sales, the company will likely emerge from the pandemic in a stronger position than many of its competitors, especially independent coffee shops and franchises like Dunkin', enabling it to gain market share. As a sign of its confidence, the company recently authorized a new round of share buybacks.

Though Amazon (AMZN -2.72%) the company gets plenty of criticism from activists, it's hard to find a bone to pick with Amazon the stock. The tech giant has probably been the best stock on the market since its 1997 IPO, returning about 100,000% since then. It's built a vast array of competitive advantages in areas like e-commerce and cloud computing, as well as its Prime loyalty program, and those strengths are underpinned by a consistently strong customer service reputation. Customers trust Amazon, and that gives it an advantage in almost any business it chooses to enter, whether that's supermarkets, healthcare, or new technology like its cashier-less convenience store powered by its "Just Walk Out" technology.

For a growth stock, Amazon has also held up incredibly well during the coronavirus crisis, a testament to its wide range of strengths and businesses. As a company with an unmatched network of e-commerce warehouses and fulfillment capabilities, Amazon has become one of the country's biggest retailers for a wide range of goods, including essentials that are in high demand these days. By all indications, the company's sales are booming -- it recently said it would hire an additional 100,000 employees and pay an extra $2/hour through April to meet the spike in demand for essentials.

Like Starbucks, Amazon is likely to emerge from the crisis in a much stronger position than many of its competitors, especially as brick-and-mortar retailers like those in apparel and other discretionary businesses have been forced to temporarily close stores. The crisis could put many of them out of business.

Throughout its history, Amazon and its CEO Jeff Bezos have shown an ability to take an advantage in one area and extend it to another, and the crisis should open a number of opportunities for such moves, including potential acquisitions.

As two companies that are leaders in their industries and have a bounty of competitive advantages, Starbucks and Amazon are both stocks that any investor can feel comfortable holding forever.