Utility stocks have pulled back from their highs. Here are three high-yield options to consider buying while the markets are in turmoil.

Wall Street fell into a bear market in just a few weeks and then bounced back in just a few days, jumping by more than 20% in record time. And now stock prices are falling again. To suggest that this is an uncertain time for stocks would be an understatement. We all know that COVID-19 is the primary reason for the volatility, which is extra disheartening because it appears that the full impact of this virus is yet to be seen. Investors are understandably on edge.

It's time like these that boring utilities stand out. The bear market took some of the biggest names in the space down with it, including Duke Energy (DUK 2.25%), Southern Company (SO 2.57%), and Dominion Energy (D 1.79%), but these utilities are all worth a closer look today. Here's why.

At the core of each of these companies are regulated utilities, including both electricity and natural gas. The key here is that regulated utilities get a monopoly in the regions they serve, but must get their rates approved by the government. There is a lot of give and take when it comes to agreeing on rates, but the big takeaway today is that the prices Duke, Southern, and Dominion can charge are decided upon outside of the normal ups and downs of the economy. Rate agreements, meanwhile, generally cover multiple years, so there's also continuity to these decisions that can help utilities get through weak economic periods. 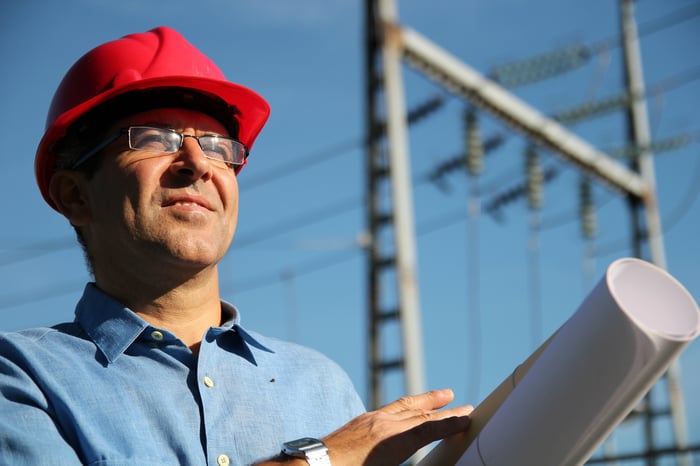 One of the important things here is that regulators are looking closely at things like system reliability and long-term demand growth. Customers costs are, obviously, a factor, but that is balanced against the greater good of ensuring access to reliable energy. So while growth for this trio of utilities will be slow and steady, hampered by government regulation, financial results are also afforded some protection because of that very same regulation. They are slow and steady businesses by design, which can be an attractive thing in volatile times.

So the core of the utility model is pretty strong, particularly at industry giants like Duke, Southern, and Dominion. However, investors need to understand that the top line is still driven by demand, so an economic downturn will lead to lower sales and earnings results. COVID-19 has led states across the country to shut down non-essential businesses in an effort to contain the spread of the virus, and a recession is looking increasingly likely.

Assuming that the United States does, indeed, see an economic downturn, all three of these utilities will likely experience weak demand and drops in sales and earnings. However, the core business model won't be impacted and financial performance should recover along with economic activity. Energy, be it electricity or natural gas, is something that the modern world can't live without. That's why these companies have a material amount of staying power.

3. Still growing, even in tough times

Because of the long-term nature of energy demand and the government oversight here, Duke, Southern, and Dominion all have material, long-term spending plans in place. They are unlikely to change in a major way because of a recession, since the spending is largely for regulator-approved purposes that help ensure that customers' lights (and heat) stay on.

Duke currently has $56 billion worth of capital investments in the works between 2020 and 2024, up from a five-year plan of $50 billion last year. Southern plans on spending $40 billion over that same span, including completing the construction of the only new nuclear power plants being built in the United States today. Dominion last updated its capital investment plans in 2019, with a five-year total of around $17 billion through 2023. It has highlighted 2020 spending of $8 billion (roughly 70% of which is earmarked for growth), but won't update its five-year plan through 2024 until May. That said, it also has big plans for future spending, including a massive offshore wind farm.

The projects these companies envision today may not all get built (situations do change), but most of that spending will likely get done because it is vital to the U.S. power grid. And that will set the utilities up for continued business growth, regardless of what is happening on Wall Street. 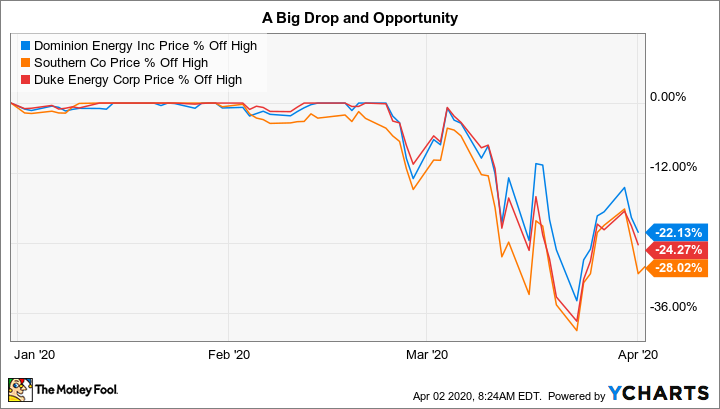 After bouncing off the lows reached in mid-March, it wouldn't be fair to say these utilities were bargain-basement deals today. However, their yields are back up to a point where dividend-focused investors looking for stable businesses should be interested. Duke's dividend yield is roughly 4.5%, Southern's is 4.3%, and Dominion's is 4.9%. For comparison, the S&P 500 Index's yield is only 1.9%, and the average for the utility group is around 3%. These giants always tend to have relatively high yields compared to the average utility, given that they are slow-growing behemoths that have historically made ample use of leverage (which isn't really unusual in the utility space given the asset-heavy business model and consistent revenue).

Each of these utilities, meanwhile, has a solid history of increasing dividends regularly. Duke has increased its dividend annually for 15 consecutive years, Southern for 19, and Dominion for 16. At this point there's no particular reason to expect these streaks to end, even with COVID-19 and the likely recession that's coming. Southern and Duke have payout ratios of roughly 55% and 70%, respectively. And while Dominion's payout ratio is a worrying 220%, there are one-time items that have impacted earnings over the last few years, including acquisitions and asset sales. The company reckons its payout ratio is really in the high-80% range. Its goal is to get that down to the 70% level over time, which is roughly the average for the utility industry. Southern's payout ratio, meanwhile, is low because of one-time items. It's likely to be closer to the 70% area over time as well. All in all, however, these dividends appear well supported.

There are differences between Duke, Southern, and Dominion that might make one a better choice than the others for you, so you need to take a closer look at each name here before picking one. However, with big yields, stable businesses, and still-solid growth prospects, these utilities might be just what income-focused investors are looking for to ride out the volatile times on Wall Street today.