With its news release this morning, Darden Restaurants (NYSE:DRI) gave one of the earliest in-depth looks at the COVID-19 pandemic's effects on a major restaurant company. The company, which is the parent of well-known subsidiaries such as Olive Garden and LongHorn Steakhouse, provided data on the first six weeks of its fourth-quarter 2020 operations. Its fiscal 2020 fourth quarter began with the week ending March 1, and provides a snapshot of coronavirus-related changes.

Same-restaurant sales remained positive at the start of March, growing a modest 3%. The dip caused by the pandemic appeared the following week, however, with weekly sales dropping 0.2%. Sales plummeted by mid-March, plunging 75.1% for the week ending March 22, falling 74.9% the following week, and most recently losing 71.2% during the week ending on April 5. Sales fell 39.1% overall during the six weeks. 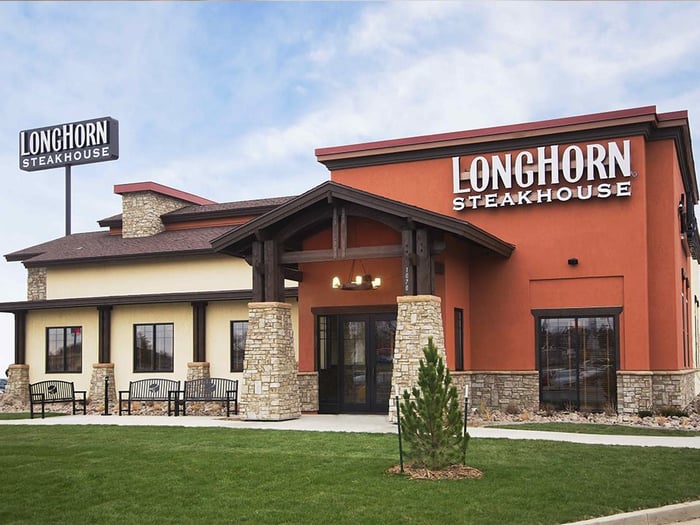 While Olive Garden and LongHorn Steakhouse took a heavy hit as a result, Darden's fine dining restaurants, Eddie V's Prime Seafood and The Capital Grille, sustained even heavier sales losses. Its fine dining locations registered same-restaurant sales declines of more than 89% one week, while its "other business" sector suffered a 94% plunge. The difference is explained in part by the availability of to-go sales at the two casual dining chains, which both saw increased off-premise purchases.

Darden Restaurants recently suspended its dividend and withdrew its guidance because of the coronavirus. It also says it obtained and fully drew down a $270 million term loan on April 6 to help it stay liquid through the pandemic. Its stocks are up more than 10% so far today amid a general rally over news of a potential end to the coronavirus lockdown in four to eight weeks.