For these three oil industry players, it wasn't just collapsing prices to blame. 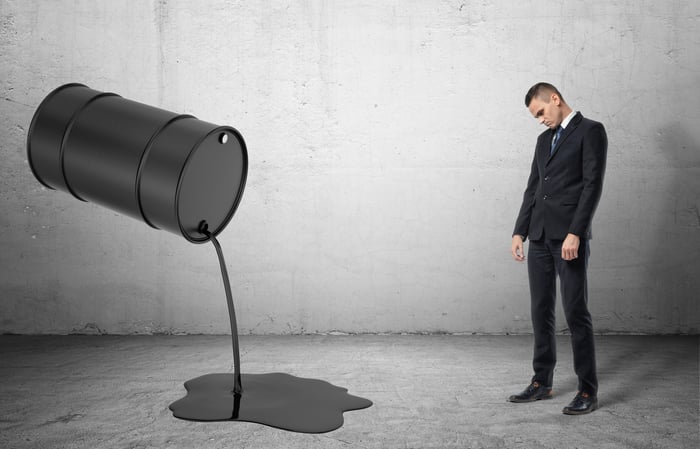 The three companies are all independent exploration and production companies, or E&Ps, which were hit hard in March by tumbling oil prices. At the OPEC+ March meeting, Saudi Arabia and Russia failed to agree on a deal to continue production limits. The feud escalated, resulting in both countries vowing to flood the global market with cheap oil. In response, oil prices fell sharply.

Global benchmark Brent Crude lost nearly half its value in March, falling from almost $52/barrel at the top of the month to just over $26/barrel at the end of it. That was bad news for global producers like Kosmos Energy, with offshore drilling operations in Africa and the Gulf of Mexico, and Vermilion Energy, which has onshore operations in Canada, the U.S., and Europe and offshore operations in Europe and Australia. Shares of both companies lost more than half their value between March 6 and March 9.

As bad as things were for traditional drilling, U.S. shale drillers like Callon Petroleum had it even worse. Shale drilling relies on complex techniques like hydraulic fracturing and horizontal drilling. As a result, it tends to not only be more expensive than traditional drilling, but the wells also tend to have a shorter lifespan.

Most U.S. shale drillers need oil prices to stay above $50/barrel -- if not more -- to turn a profit. At the beginning of March, WTI Crude -- the U.S. benchmark -- was sitting just above that mark. But after the price war began, the price of WTI Crude fell by more than half, briefly dropping below $20/barrel near the end of March.

That forced all three companies to take some drastic action to ensure their survival.

On March 16, Vermilion Energy was the first of the three companies to take action. It announced in a press release that, "[w]hile we continue to believe the long-term fundamentals for the oil and gas industry are sound and will lead to higher prices in the future, we cannot predict how long the impact from COVID-19 and the OPEC+ price war will continue."

On March 17, just a day after Vermilion's announcement, Kosmos announced it would target a 30% reduction in its 2020 capital budget and suspended its dividend outright. Both stocks had already seen big drops by the time these announcements came out, but the dividend cuts ensured they didn't see any rebound later in the month, like some of their industry peers.

Callon didn't have a dividend to suspend, but it announced its own 25% cut in 2020 capital spending on March 17. Its stock was the worst performer of the three in March, thanks to a bit of bad timing.

Just four months ago, Callon closed the purchase of fellow Texas shale producer Carrizo Oil and Gas for $740 million in stock and the assumption of Carrizo's $1.7 billion in debt. Even at the time, the deal was controversial, with some investors worrying that Callon had overpaid.

But now, Callon's stuck with $3.2 billion in debt on its balance sheet and just $13.3 million in cash on hand plus a bunch of Texas shale assets that can't generate a profit at current prices. Small wonder investors ran for the exits when oil prices collapsed.

In any industry crisis, it's the weakest players that tumble first and (generally) tumble farthest. Kosmos Energy has seldom been profitable, even before the current crash. Both it and Vermilion Energy have debt loads of more than twice their earnings before interest, taxes, depreciation, and amortization (EBITDA). Callon Petroleum's debt, for its part, is more than 4.5 times its EBITDA, and it took on that debt to acquire assets of questionable value.

The market punished these stocks for a reason. Even if oil prices mount a swift recovery, it's unclear how well these three companies can perform. There are better prospects in the oil and gas industry. Smart investors should give these stocks a wide berth.

Why Vermilion Energy Stock Soared as Much as 15% Today