When losing 11.5% is considered a strong showing, you know something big is going on. Here's how CubeSmart managed the feat.

Shares of self-storage focused real estate investment trust (REIT) CubeSmart (CUBE 2.30%) fell 11.5% in March according to data from S&P Global Market Intelligence. While that sounds pretty bad on an absolute basis, it was actually a standout performance relative to the broader market and its REIT peers.

To put some numbers on that, the S&P 500 Index was down 13% in the month, and the average REIT, using Vanguard Real Estate ETF as a proxy, was down 20%.

The broader market decline was driven by very real concerns surrounding the global spread of COVID-19. To contain the virus' impact, countries around the world basically shut down their economies. The United States was no different, with the government at various levels asking or demanding that people stay home and nonessential businesses shut down.

The impact wasn't universal (grocery stores and pharmacies, among others, have been allowed to remain open), but the U.S. economy is likely to fall into a recession because of these vital social distancing moves. 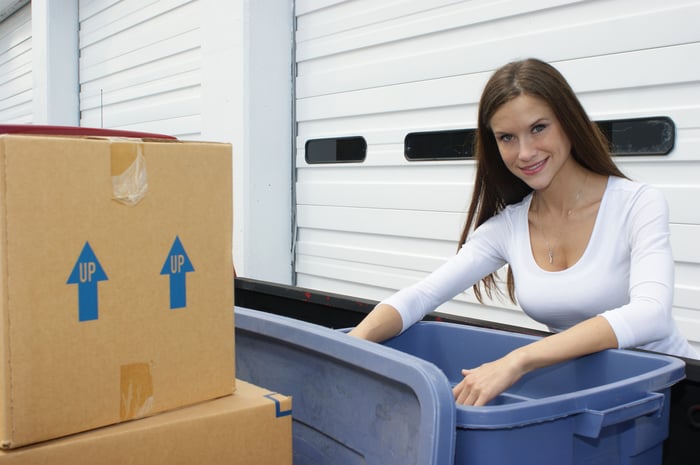 The situation is bad. So, investors are not overreacting by selling stocks. But the bigger question here is how CubeSmart's stock managed to outperform in such an ugly situation. The answer is its rent is tied to relatively modest recurring bills for storage units. Usually paid via a credit card, there's unlikely to be a material risk to rents not getting paid. Moreover, COVID-19 isn't likely to lead its customers to rush in to clean out their units, so occupancy levels will probably remain fairly consistent.

Although a recession would be a notable headwind, self storage REITs such as CubeSmart have pretty resilient businesses. In other words, even the lingering impact of COVID-19 should be manageable for CubeSmart. Which is why, even during a particularly bad period on Wall Street, the REIT's stock performed relatively well.

Growth in the self storage business isn't what it was a few years ago, so don't expect CubeSmart to be quite as rewarding as it has been historically. However, the price drop related to COVID-19 has left the REIT's yield (at roughly 5%) near its highest levels in a decade. Investors who have shied away from the self storage space because of generally elevated valuations might want to start taking a closer look today. And CubeSmart is a name worthy of a deep dive.