Please ensure Javascript is enabled for purposes of website accessibility
Log In Help Join The Motley Fool
Free Article Join Over 1 Million Premium Members And Get More In-Depth Stock Guidance and Research
By Keith Noonan – Apr 8, 2020 at 10:37AM

Word of the biotech's pending acquisition pushed its stock to a record high.

Shares of Forty Seven (FTSV) climbed 64.5% in March, according to data from S&P Global Market Intelligence. The immuno-oncology specialist's stock skyrocketed early in the month after it was announced that the company was on track to be purchased by Gilead Sciences (GILD 0.86%). 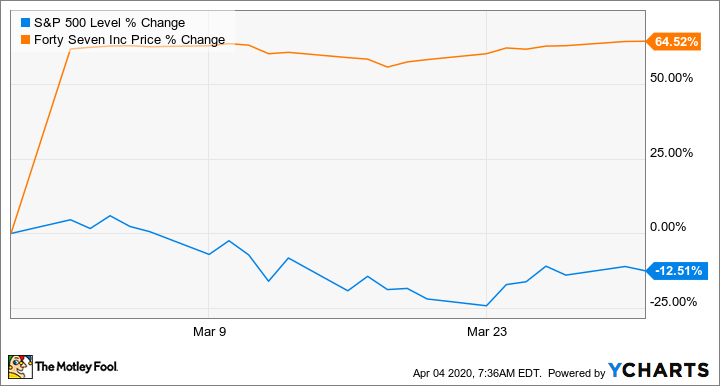 Gilead Sciences announced on March 2 that it had reached terms to acquire Forty Seven in a $4.9 billion deal that valued the immuno-oncology company at $95.50 per share. Forty Seven's share price jumped following the news to a level close to the buyout bid, and stayed relatively stable throughout the rest of the month while the broader market experienced downward pressure stemming from the COVID-19 pandemic.

Both companies' boards of directors unanimously approved the deal to buy Forty Seven, with the purchase set to be carried out by Gilead's Toro Merger Sub subsidiary. A tender offer was issued on March 10 by Gilead and has since been completed. Gilead Sciences stock climbed roughly 7.8% in March, largely due to investors' hopes that its antiviral drug remdesivir (which was previously tested as a potential treatment for Ebola) could be effective against COVID-19, but also due to momentum from the Forty Seven acquisition.

Gilead and Forty Seven published press releases on April 7 announcing that the merger had been completed and that the smaller biotech company's stock had been converted at the agreed-upon price of $95.50 per share.  The deal was Gilead's second major acquisition push into the immuno-oncology space, the first having been its 2017 purchase of Kite Pharma for $11.9 billion.