Oil producers were among the first to feel the pain of a huge oil price war.

Hess' shares were down 40.7%, similar to EOG's 43.2% decline. Both were roughly in line with the overall oil and gas exploration and production (E&P) industry as a whole, as measured by the SPDR S&P Oil & Gas Exploration and Production ETF (XOP 1.83%) 46.5% for the month.

Marathon, on the other hand, saw its shares fall much further, finishing the month down 60.3%. Shares of all three have risen slightly since the end of March, as traders have become more optimistic about an end to the global oversupply. However, all three stocks are down more than 40% for the year, with Marathon's shares down more than 70% so far in 2020. 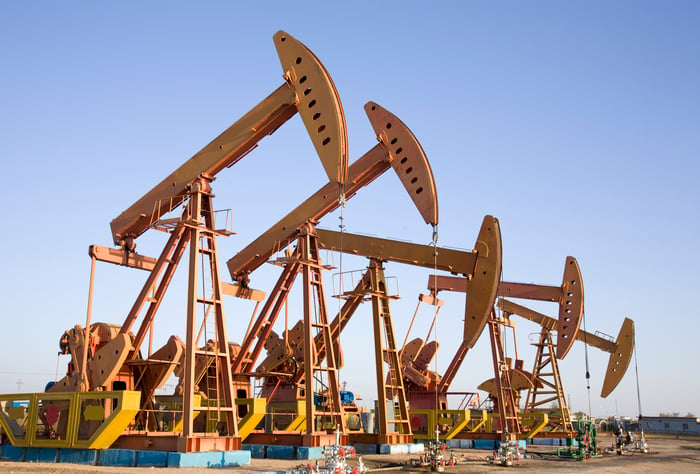 Oil producers are always one of the first companies to get slammed when oil prices head south, and boy, did they head south in March! Crude oil prices for global benchmark Brent Crude and U.S. benchmark WTI Crude began the month above $50/barrel, but were cut roughly in half after a March OPEC+ meeting ended in disaster.

OPEC+ consists of the member nations of the OPEC oil cartel -- led by Saudi Arabia -- and Russia. Saudi Arabia and Russia are the No. 2 and No. 3 producers of oil and gas; the U.S., incidentally, is No. 1, thanks in large part to the shale boom, in which new extraction techniques like hydraulic fracturing ("fracking") and horizontal drilling have opened up previously inaccessible reservoirs of oil and gas.

That shale boom has contributed to a big global oversupply. To keep global oil prices from falling, OPEC+ had agreed to limit oil production. On March 6, though, Russia decided it no longer wanted to play ball. Shale oil is comparatively expensive to extract, because of the complex techniques involved, and shale drillers need oil prices to stay above $50/barrel -- if not more -- to turn a profit. Meanwhile, conventional wells like the kinds operated by Russia and Saudi Arabia can turn a profit at much lower prices.

Why, Russia reasoned, should it cut its own production to benefit U.S. producers? Russia vowed to eliminate its production limits, and Saudi Arabia did the same. Many other OPEC members followed suit. In addition, Saudi Arabia began offering discounts to its customers, a trick that was adopted by other countries as well. In short, the globe suddenly found itself awash in cheap crude, and oil prices collapsed.

That was bad news for all oil companies, but E&Ps with major operations in North American shale basins fared the worst. 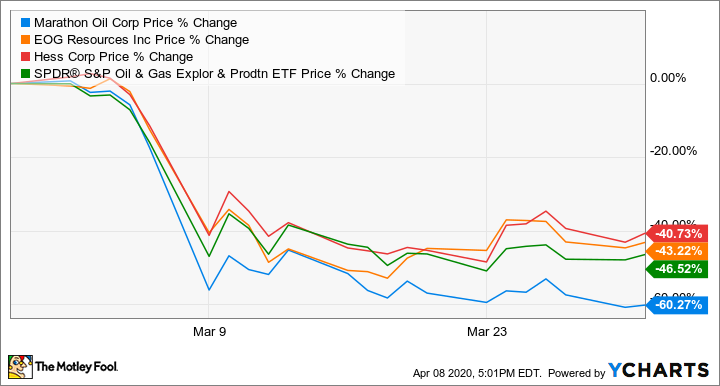 The big reason that Hess outperformed the industry average is that it hardly has any shale assets in its portfolio: just the Bakken Shale in North Dakota. The bulk of its assets are offshore plays in places like the Gulf of Mexico, the North Sea, and Malaysia. Marathon Oil, on the other hand, has just one active field that isn't a North American shale play. That's why it underperformed the industry average.

Interestingly, EOG Resources is the exception that proves the rule. The company is almost exclusively focused on North American shale, but its stock managed to outperform the overall industry in March (albeit only by about three percentage points). However, EOG isn't like most other shale companies, which have been spending wildly to beef up their production growth at any cost. EOG has taken a different approach, focusing its spending instead on a limited number of high-return projects. That's allowed the company to build up an impressive cash reserve and boost its dividend by 30% for 2020.

All three of these oil producers have cut their budgets for 2020 in an effort to preserve cash. EOG slashed its 2020 capital expenditures by 31% and is reducing drilling activity across its portfolio. Hess is trimming its 2020 capital budget by 26.7% and ditching almost all of its Bakken Shale rigs.

Marathon has actually made two rounds of cuts. On March 10, it cut its 2020 capital spending by 30%, and announced it was suspending its Oklahoma operations and "meaningfully reducing" its Permian Basin presence. Then, on April 8, it rolled out a revised plan that included a 50% capital spending cut for 2020, including suspending its Permian Basin operations and implementing "frac holidays" -- periods of mandated inactivity -- in the Eagle Ford and Bakken Shales during the second quarter.

These moves should help the companies weather the low-oil-price environment. The production reductions should also help the oversupply problem. However, until we have a better sense of where global oil prices are heading, independent E&Ps are still risky propositions right now, especially those like Marathon and EOG that are dependent on shale production. Smart energy investors should probably hold off buying for now.