Please ensure Javascript is enabled for purposes of website accessibility
Log In Help Join The Motley Fool
Free Article Join Over 1 Million Premium Members And Get More In-Depth Stock Guidance and Research
By Rick Munarriz – Apr 9, 2020 at 8:00AM

Wells Fargo's Steven Cahall downgraded Disney (DIS -3.20%) on Wednesday, with a grim takeaway that it may take two years for the media giant's industry-leading theme parks to get back on track. He's lowering his rating on Disney from bullish to neutral and slashing his price target on the stock from $155 -- just above its November all-time highs -- to $107.

Cahall's prognosis is pretty grim. He sees Disney's currently closed theme parks generating no revenue in fiscal 2020, and that means the gated attractions won't resume operations until October at the earliest. We're talking about shuttered parks throughout the entirety of the spring as well as the peak summer travel season. His outlook beyond that is just as problematic. 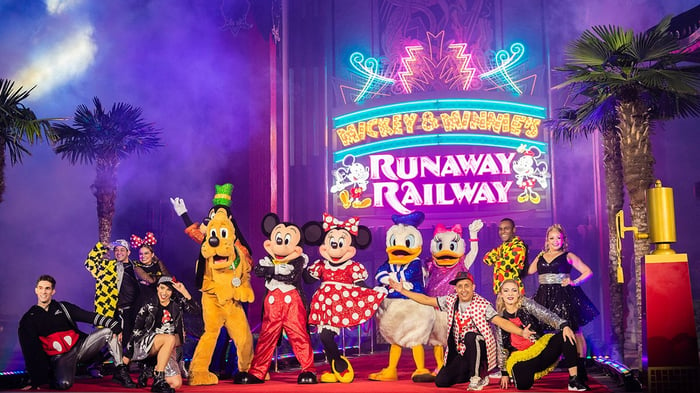 Cahall sees Disney's domestic theme parks operating at roughly 50% of their capacity in fiscal 2021, and that's a scary notion when you consider that this period stretches all the way through September of next year. Limiting capacity could prove challenging, even if an organic downturn in turnstile clicks when the parks do reopen makes sense.

We're eyeing the strong likelihood of a global recession at the other end of the COVID-19 crisis, and a once-in-a-lifetime visit to a Disney theme park isn't cheap. We saw attendance dip at Disneyland and Disney World for a few months last year, and that was in the 10th year of the country's economic expansion and with new high-tech attractions to woo patrons.

International visitors -- an aspirational goal for Disney's smaller rivals, but a strong part of the Disneyland and particularly Disney World models -- will also be harder to come by when the parks reopen. Overseas travel is going to take a long time to get back on track. Even if a viable vaccine becomes available and the economy miraculously recovers quickly, folks will probably want to stay close to home until they're sure that the coast is clear.

There's also the real possibility that it may become trickier to enter a Disney theme park. Shanghai Disney, the first theme park resort to close three months ago, has started to reopen some of the stores and restaurants within the resort's entertainment district. Shanghai Disneyland itself remains closed, but guests entering the resort for some shopping or a quick bite are required to don masks and take a temperature check on the way in. Anyone sporting a fever is turned away. In a recent Barron's interview with Bob Iger, the former Disney CEO suggests that temperature checks could become a reality at Disneyland and Disney World until COVID-19 is fully vanquished.

It's not likely to happen, but if Disney does go the route of taking temperature readings by the security screening stations, it would thin the herd of potential visitors. A family considering to spend thousands on a Disney getaway is going to have second thoughts about planning a trip if a low-grade fever reading for anyone in the party would derail the entire vacation.

There won't be a winning way to orchestrate limited capacity next year if things get to that point. Would Disney restrict theme park access to folks staying at its resorts, at least on weekends? Would it raise prices of tickets and annual passes to the point that demand equals the supply that Disney is comfortable in offering? If the global recession is enough to curb crowd levels organically, that obviously isn't an ideal way for Disney to tackle the coronavirus crisis. Disney will have some pretty big problems if takes two years to get back to business as usual.