Please ensure Javascript is enabled for purposes of website accessibility
Log In Help Join The Motley Fool
Free Article Join Over 1 Million Premium Members And Get More In-Depth Stock Guidance and Research
By Nicholas Rossolillo – Apr 9, 2020 at 8:15AM

The two largest cruise line operators were hit hard by the coronavirus epidemic and are in survival mode.

Cruise lines have taken it on the chin from the coronavirus crisis. Sailings have been suspended worldwide, workers have been laid off, and neither of the world's two largest operators -- Carnival (CCL -6.06%) and Royal Caribbean (RCL 1.26%) -- is incorporated in the U.S., making them (and the majority of their employees) ineligible to get help from the $2 trillion stimulus package that Congress just passed.

While I expect both companies to survive the economic fallout caused by COVID-19, suffice to say this will be more than a short-term bump in the road. Investors looking to open positions in Carnival or Royal Caribbean should be careful. The cruise operators have had to take on new debt (and in the case of Carnival, also sell equity) to remain afloat in these troubled waters. And there's no guessing how quickly vacationers will return to their ships once it's deemed safe enough for them to get back into operation.

One of these companies, however, entered the pandemic crisis in better shape than the other.

Making hay while the sun's shining

Though Carnival is by far the larger of the two cruise lines, Royal Caribbean has been far more profitable. Based on measurements such as free cash flow -- a better metric since it backs out non-cash expenses like depreciation of ships -- as well as operating margin (profit after cost of revenue and operating expense) and return on capital (the return on its investments, in this case, cruise ships), the smaller cruising outfit has generated better returns than Carnival has. 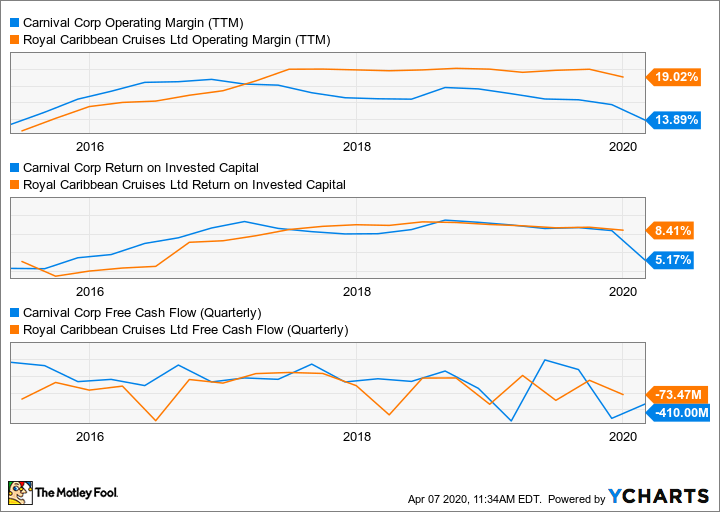 Granted, Carnival does have the disadvantage of having already reported on its fiscal 2020 first quarter, the three-month period that ended Feb. 29, which includes the beginning of the global coronavirus slowdown. After a record year in 2019, Carnival said it was already feeling the effects of the pandemic due to canceled voyages and impairment charges taken on its fleet. Free cash flow was negative $410 million in Q1. With voyages still suspended and the company extending cancellation and rebooking out until 2021, Royal Caribbean is in for steep losses too. 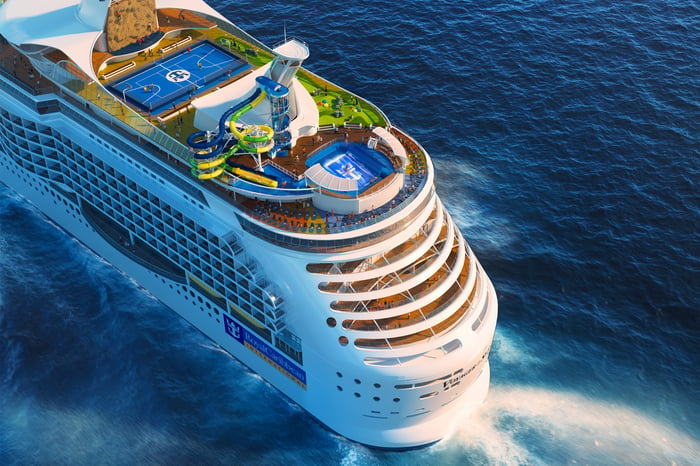 When debt becomes a crushing burden

While Royal Caribbean has historically generated higher profit margins, it can't be relied on to keep doing so. Little of those extra earnings were held out as cash on the balance sheet. Royal Caribbean had a mere $244 million in cash and equivalents at the end of 2019, compared with $1.35 billion at Carnival. As a percentage of 2019 operating expenses, Carnival had about one quarter's worth of cash on hand. Royal Caribbean had about six weeks' worth.

To be fair, neither company's stockpile is going to last long, even with many of those expenses (like fuel, food, and other variable expense) going away now that ships are confined to port. But with most ships anchored until at least mid-May and many more awaiting the autumn months, the industry faces lean times for the foreseeable future.

In response, both companies have issued debt to help cover short-term expenses. Carnival, for its part, just issued $4 billion in secured notes bearing interest of 11.5% due in 2023, $1.95 billion in convertible debt at 5.75% due in 2023, and sold $575 million in new stock. The interest expenses on that new debt will cost the company a great deal in the coming years -- and the company already had a hefty $12.9 billion in long-term liabilities at the conclusion of 2019.

As high a burden as that seems, Royal Caribbean isn't too far behind. Despite having a smaller fleet, it had $11 billion in debt at the end of 2019. It added $2.2 billion in debt via a secured one-year term loan it can renew for another year in early 2021. With less cash and higher leverage, Royal Caribbean will be shelling out more in interest payments as a percentage of revenue in the coming years than its larger peer. Carnival thus gets my vote as the favorite to come out of this cash crunch in fitter shape -- albeit in "fitter shape" only relative to its peers.

As an important aside, it's worth noting that Saudi Arabia this month took an 8.2% equity stake in Carnival via its sovereign wealth fund. If I were betting on a rebound (full disclosure, I'm not), I'd agree with Saudi Arabia's move. Though Carnival has generated lower profit margins in years past, now isn't the time to fret about maximizing the bottom line. Today, it's all about surviving the crisis, and Carnival's larger scale and lower debt relative to its size make it look like the better bet in a beaten-down cruise industry. Royal Caribbean has bought itself time, too, but it had the uglier balance sheet headed into the coronavirus crisis.

Once cruises are back up and sailing and the companies are able to pay the bills without the help of new debt, it will be time to reevaluate who's in the best position to profit. But in times of peril, balance sheets matter, and it's Carnival that's relatively healthier on that score.