The tech company addresses a high-growth market, but investors should remain prudent.

The innovative tech company Fastly (FSLY 0.56%) is growing in a market that is poised to expand in a significant way over the long term. But that doesn't mean the stock represents an attractive investment for prudent investors.

You may benefit from Fastly's technology without knowing it. The small technologist, founded in 2011, developed a worldwide computing infrastructure that improves the availability of internet services. Enterprises use Fastly's 68 POPs (points of presence that are decentralized datacenters) around the world to host their web services as close as possible to users, which reduces the response time of those web services. That's called edge computing. Also, Fastly's infrastructure helps these web services stay available when spikes of internet traffic materialize.

In addition, the deployment of 5G should boost the demand for Fastly's solutions. The low latency (delay) and the high speed the 5G technology promises require the edge-computing infrastructures Fastly and other competitors, such as Akamai Technologies, offer.

As a result, the research company Allied Market Research estimates the edge-computing market will grow from $1.7 billion in 2017 to $16.6 billion in 2025 -- an impressive compound annual rate of 32.8%.

Fastly's revenue growth seems to indicate the company is maintaining its market share in that expanding market. Revenue increased to $200.5 million in 2019, up 38.7% year-over-year. And revenue should grow by 29.7% this year, based on the midpoint of management's revenue-guidance range. 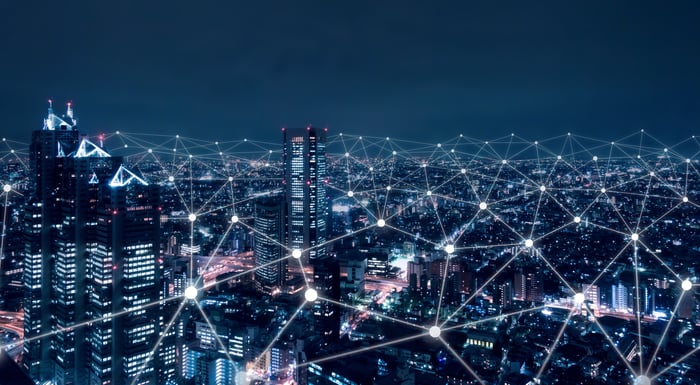 The need for scale

Despite its strong revenue growth, Fastly must still gain scale to compete against larger players and become profitable. Management plans to increase the number of markets (unique metropolitan areas with one or more POPs) the company serves from 53 to 100. But that growth involves important investments, which lead to losses.

Losses under generally accepted accounting practices (GAAP) reached $55.6 million in 2019, compared to $30.9 million the year before. And management forecasts non-GAAP (adjusted) operating losses to land in the range of $33 million to $43 million this year.

A part of these losses is due to the company's modest gross margin of 55% in 2019. In contrast, its competitor Akamai's gross margin reached 66% last year thanks to its larger revenue base of $2.9 billion.

In addition, Fastly relies on innovative edge-computing software and solutions to maintain its market share. Thus, it must keep a research and development (R&D) budget that matches its ambitions. But because of its lower revenue base, R&D represented 23% of revenue last year, compared to only 9% for Akamai.

Given the required investments to gain scale, profitability seems far away, and Fastly is likely to keep on tapping its cash balance to fund its growth.

However, the company's net cash (cash, cash equivalents, and investments minus total debt) of $176 million won't support extra losses for many years. And Fastly may face difficulties to raise cash -- via debt or equity issuance -- at acceptable conditions if the coronavirus situation persists.

In addition, the impact of the coronavirus on Fastly's business remains uncertain. Granted, Fastly should profit from the surge of internet usage over the last few weeks. For instance, Verizon Communications CEO Hans Vertberg recently mentioned enormous network growth. But at the same time, some of the industries Fastly serves -- travel, entertainment -- are being severely hit by measures to limit the spread of COVID-19.

In the long run, other significant risks may materialize. The competition with cloud giants, such as Amazon's Amazon Web Service (AWS) and Microsoft's Azure, could intensify, which would put Fastly in an uncomfortable position, since it also partners with these tech behemoths.

Even with the coronavirus pandemic, Fastly's stock price remains well above its IPO price of $16 one year ago. And based on the midpoint of revenue guidance this year, the market values the company at an enterprise value-to-sales ratio of 6.8.

Despite Fastly's strong revenue growth in a market that is poised to expand over the long term, Fastly doesn't look like an attractive growth stock for prudent investors. The company's high valuation indicates the market ignores the risks and expects flawless execution over the next several years.

Thus, Fastly stock may be a buy only for audacious investors looking for long-term exposure to the promising edge-computing market.