Please ensure Javascript is enabled for purposes of website accessibility
Log In Help Join The Motley Fool
Free Article Join Over 1 Million Premium Members And Get More In-Depth Stock Guidance and Research
By Rich Smith – Apr 9, 2020 at 11:52AM

Partners hope to intervene sooner and reduce the need for ventilators, thus mitigating the shortage of the devices.

The shortage of ventilators for COVID-19 patients became a national story last month. In recent weeks, multiple companies have stepped up to address the shortage. For example, Medtronic made its intellectual property for ventilator production open-source, and industrial companies including Ford and General Motors tweaked their production lines to produce the devices.

In the latest example of American industry innovating to address the crisis, yesterday new space company Virgin Galactic (SPCE -2.48%) announced it is teaming up with The Spaceship Company ("TSC" -- a Virgin Group sister company that makes spaceships for the group), NASA, and Los Angeles County-based Antelope Valley Hospital to develop a novel solution that can supplement scarce supplies of ventilators in hospitals. 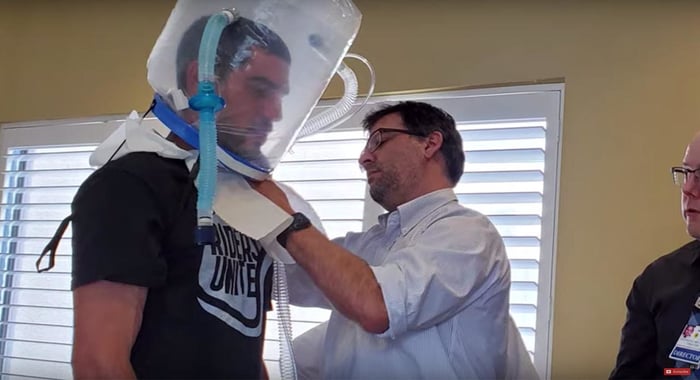 Working together as part of the Antelope Valley COVID-19 Task Force, Virgin Galactic has helped develop "several prototype patient oxygen hoods, which allow oxygen rich pressure to support those admitted with COVID-19 – opening up the alveoli in the lungs, and helping to delay or prevent Acute Respiratory Distress Syndrome (ARDS) from developing," the company announced last night.

"By mitigating ARDS, we hope," says Virgin Galactic, "that use of these oxygen hoods will prevent a patient's condition from becoming critical, and thus "reduce the subsequent need for ventilator support."

Working together, Virgin Galactic, TSC, and NASA have "already delivered 50 working hoods to the hospital" where they are "being tested for comfort, ease of use and functionality." In anticipation that the results will be positive, Virgin Galactic is already seeking out partners to expand production of similar oxygen hoods based on related technology in other locations.

In a statement thanking its partners for their help, Virgin Galactic expressed the hope "that human ingenuity, toughness, and community resilience will beat COVID-19."