Please ensure Javascript is enabled for purposes of website accessibility
Log In Help Join The Motley Fool
Free Article Join Over 1 Million Premium Members And Get More In-Depth Stock Guidance and Research
By John Bromels – Updated Apr 9, 2020 at 9:51AM

Shares of natural gas companies Clean Energy Fuels (CLNE -0.93%), Kinder Morgan (KMI -0.48%), and NextDecade (NEXT -2.75%) all fell more than 20% in March, according to data provided by S&P Global Market Intelligence.

Clean Energy Fuels, which is investing in natural-gas powered trucks and filling stations, saw its shares fall 21.2% for the month. Shares of North America's largest natural gas pipeline operator, Kinder Morgan, were down 27.4%. And the stock of NextDecade, a would-be exporter of liquefied natural gas (LNG), was absolutely hammered to the tune of 50.9%. All three performed much worse than the overall market, which was only down 12.5% for the month. 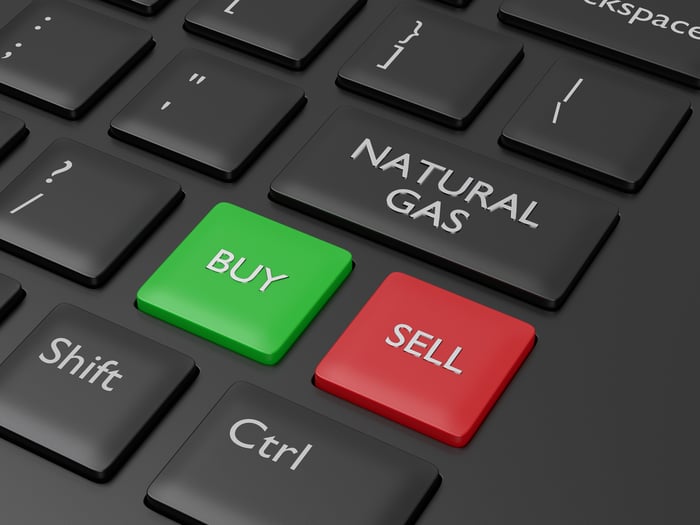 The primary culprit for all three companies' woes was the collapse in oil prices. After a spat between OPEC+ members Saudi Arabia and Russia scuttled the cartel's production limits on March 6, both countries vowed to ramp up production as much as possible and flood the globe with cheap crude. That caused oil prices to lose about half their value, tumbling from above $50 a barrel to the $25 range. These gas stocks followed suit primarily due to the impact the price slump would have on U.S. shale producers.

Shale drilling is more expensive than conventional drilling because extracting oil and gas (often found together in shale deposits) requires extra effort, usually in the form of hydraulic fracking and horizontal drilling. In addition, shale wells don't have as long a lifespan as conventional wells. Because oil is more valuable than natural gas, most shale drillers need to be able to sell their oil at $50 or more to turn a profit from shale operations.

But the U.S. energy boom (in particular, the gas boom) has been fueled by shale. If it's no longer profitable to operate wells in shale basins, that's going to have a huge impact on how much natural gas is available...and how cheap it will be. Already, at least one shale producer, Whiting Petroleum, has filed for bankruptcy. Others, like Apache, have announced they're abandoning their shale operations completely. Practically all of the others are planning to cut rigs and lower their well counts, or exit certain shale plays.

That sudden drop in gas production is going to have an effect on Kinder Morgan, NextDecade, and Clean Energy. 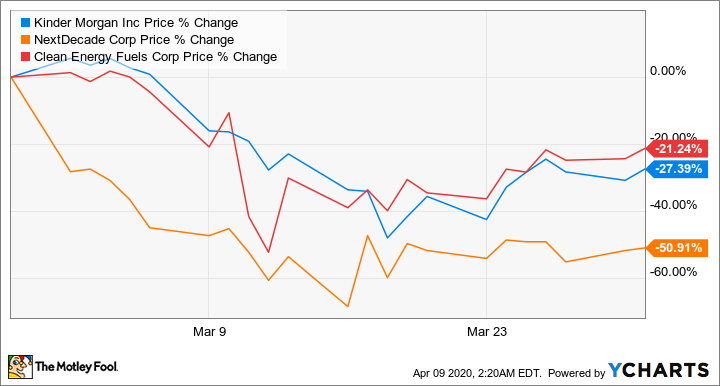 NextDecade has been planning an ambitious, massive project to build a pipeline and export terminal that would transport cheap shale gas, convert it to LNG, and export it to overseas markets starting in 2023. But the company has encountered delays in finding financing partners. If shale gas production drops sharply, however, it calls into question whether the company will have an adequate supply of gas, as well as whether that gas will stay cheap enough to make the project cost-effective. NextDecade hasn't released any sort of statement or update since mid-February, and the silence is deafening for investors.

As the operator of the largest natural gas pipeline network in North America, Kinder Morgan is obviously going to be affected by the amount of shale gas being produced. While many of its profitable long-haul pipelines supply gas to major metropolitan areas, the company boasts that its network connects to "every important natural-gas resource play and supply area, including the Eagle Ford, Marcellus, Bakken, Utica, Uinta, Permian, Haynesville, Fayetteville, and Barnett." All of those are shale basins.

But a lack of supply might not affect Kinder Morgan as much as you'd expect: 27% of the company's cash flow comes from reliable volume-based fees, and another 64% is secured by take-or-pay contracts, meaning even if a customer stopped shipping any gas at all through Kinder's network, the company would still get paid.

Finally, the barely profitable Clean Energy Fuels is trying to encourage companies to switch away from gasoline and diesel vehicles to fleets powered by natural gas. If that gas suddenly gets more expensive, while at the same time oil gets cheaper, Clean Energy is going to have a tough time attracting new customers, not to mention the fact that it may experience thinner margins trying to service the customers it does have.

Clean Energy Fuels and NextDecade have ambitious plans, but the current shale crisis may have thrown a huge wrench into those projections. Until they can demonstrate that they can still execute their long-term strategies in the new environment, investors should steer clear. Kinder Morgan, on the other hand, seems well positioned to weather a new normal featuring less shale gas production. Investors may want to take the opportunity to pick up some shares while the price is still relatively low and the dividend yield is above 7%.