Please ensure Javascript is enabled for purposes of website accessibility
Log In Help Join The Motley Fool
Free Article Join Over 1 Million Premium Members And Get More In-Depth Stock Guidance and Research
By Rich Smith - Apr 10, 2020 at 7:13AM

On March 18, in the midst of the pandemic, SpaceX successfully launched its sixth batch of Starlink internet broadband satellites into orbit atop a Falcon 9 reusable rocket. (The rocket later missed its landing due to an engine malfunction -- but having flown five missions in a row, it was getting a bit old anyway.) 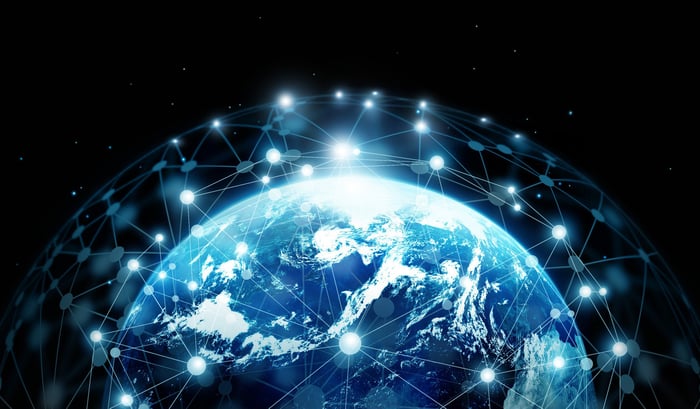 With roughly 350 satellites now in orbit, SpaceX is almost halfway to reaching its goal of orbiting the 800 satellites necessary to deliver "moderate" internet coverage to all places on Earth. Complete coverage will still require 12,000 satellites -- and 194 more launches -- or another 7.5 years of launching at the present pace of two launches per month, 60 satellites per launch.

So how will SpaceX come up with the money it needs to build and launch (and refurbish and relaunch) 200 rockets, not to mention the 12,000 satellites they are carrying?

By getting you to pay for it -- twice.

The first part of Musk's plan to pay for Starlink works as you'd expect it to. Once achieving "moderate" internet coverage, SpaceX will begin providing, and charging for, broadband internet service from space. According to internal SpaceX documents that The Wall Street Journal obtained in 2017, SpaceX is looking to generate some $3 billion in revenue from selling internet service this year.  (Or at least that was the plan as of 2015, the date on the documents reviewed. With Starlink slightly behind schedule, this year's revenue may end up being somewhat less than initially planned.)

Over time, as the company orbits and activates more and more satellites, SpaceX expects to derive increasingly large percentages of its revenue from satellite internet service. In fact, by 2025, the company think broadband satellite internet could be a $30 billion-a-year business, generating six times more revenue than the company gets from launching rockets -- and at operating profit margins approaching 60%.

Even earlier than that, by 2023, SpaceX expects Starlink to produce just shy of $20 billion in revenue, and more than $10 billion in operating profit. When you consider that building Starlink is expected to cost $10 billion in total, chances are that that year's profits alone would suffice to pay for the project entirely.

Long story short, SpaceX is almost certainly capable of building, and paying for -- and profiting richly from -- Starlink all on its own. Nevertheless, Elon Musk has never been one to leave government money on the table. And as WSJ reported last month, there's a chance Musk could get U.S. taxpayers to pay for all of Starlink, such that the money SpaceX makes from operating the service could turn out to be pure profit for SpaceX.

Here's how that plan might work: In January, the Federal Communications Commission launched a $20.4 billion "Rural Digital Opportunity Fund" to expand fast internet access by paying for the construction of "up to gigabit speed broadband networks in unserved rural areas" over the next 10 years. $16 billion will be up for grabs initially, and another $4.4 billion later on, with the funds coming from government surcharges (taxes) levied on consumers' phone bills.

SpaceX wants to bid for part or all of the funds available, and to offer to beam internet access from space in competition with traditional "wired" internet providers such as Comcast, CenturyLink, and Conexon LLC. Such companies oppose SpaceX's involvement, arguing that SpaceX's satellite internet technology is unproven, reports The Wall Street Journal. But Musk responds that its satellite-based internet will offer "low-latency" similar to offerings from cable providers -- and he has the tweets to prove it.

The FCC has not yet decided whether to let SpaceX bid. If it does, though, there's a very real possibility that SpaceX's bid would be low enough to "win the entire auction," warn The Rural Broadband Association and the National Rural Electric Cooperative Association, two organizations representing incumbent cable providers -- and they could be right about that.

According to Elon Musk, building an operational Starlink satellite internet broadband constellation could cost as little as $10 billion. And once built, maintaining it would presumably cost far less. In contrast, Comcast spends $10 billion to $11 billion every year on capital maintenance and investment. Granted, this capital budget covers a lot of Comcast businesses, not just cable. But data from S&P Global Market Intelligence show that CenturyLink, for example, which is primarily a cable business, spends upwards of $3 billion a year on capital investment to maintain a cable infrastructure only about one-third the size of Comcast's, and considerably smaller than SpaceX's global Starlink would be.

This speaks to the relative cheapness of providing rural broadband internet access from space, as opposed to providing it through cables laid underground. If SpaceX can also demonstrate it has the necessary bandwidth to provide the service, and can provide it at sufficiently low levels of latency, there's a very real chance that the lion's share of this Rural Digital Opportunity Fund money will go to SpaceX.

In that case, SpaceX could conceivably build its network on the government's dime -- and keep the profits for itself.