Please ensure Javascript is enabled for purposes of website accessibility
Log In Help Join The Motley Fool
Free Article Join Over 1 Million Premium Members And Get More In-Depth Stock Guidance and Research
By Adam Levy - Apr 10, 2020 at 11:15AM

The House of Mouse has been hurt more than most media companies.

Disney's (DIS 1.84%) massive empire has been hit harder than most media companies amid the coronavirus pandemic. With operations beyond producing and distributing film and television, including its theme parks and consumer goods, Disney is seeing a significant disruption as people practice social distancing.

Analysts at Wells Fargo recently published a reevaluation of Disney's stock, giving it a new target enterprise market valuation of $244 billion based on a sum of the parts. That's a 26% decrease from its target before COVID-19 started spreading. Here's how coronavirus will impact each part of Disney's business. 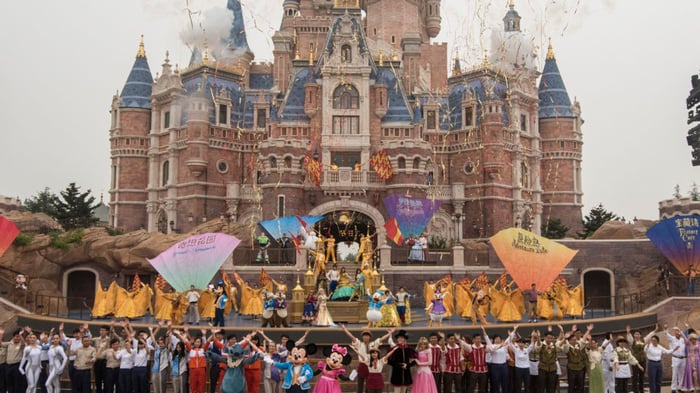 Disney's theme parks will undoubtedly be the hardest hit. Wells Fargo decreased the value of the segment by nearly two-thirds. Disney made the decision to close all of its theme parks around the world in mid-March after it closed its parks in Shanghai and Hong Kong earlier this year.

During Disney's second-quarter earnings call, management estimated closing the Shanghai and Hong Kong parks for two months will result in $145 million in lost operating profit. But the closures are now much more widespread and for much longer. Wells Fargo doesn't think parks will open up to the general public again until the end of this year. Even then, it expects limited attendance as the environment remains uncertain. The analysts expect it'll take two years for attendance to return to normal.

Movie theaters are closed, which is about the only thing that can stop Disney from producing several billion-dollar box-office hits these days. The company has had to postpone premieres of big titles from its Marvel Studios, and it truncated the theatrical window for its latest Pixar release, Onward.

Disney's theatrical distribution accounts for over 40% of its studio entertainment revenue. With movie theaters closed for several months, it'll put a huge dent in that revenue. Meanwhile, Disney's home entertainment revenue will likely fall, as it won't have as many films coming through the pipeline later this year due to delays and cannibalizing itself with Disney+.

ESPN will be the hardest hit by the coronavirus pandemic. Many sports leagues have suspended play while social-distancing orders are in place. Without any sports to air, ESPN may violate its contractual commitments to pay-TV distributors, leading to lower affiliate revenue. ESPN will also miss out on significant amounts of ad revenue without any sports to draw in an audience.

Wells Fargo doesn't see as big of an impact on other cable networks. While there's potential for cord-cutting to accelerate due to economic strain and a lack of content, Disney won't see any more negative impact than other cable media companies.

However, Disney's broadcast networks and studios will see a considerable hit. With the majority of revenue coming from advertising, Disney is highly susceptible to the pullback in marketing spend we've experienced as both demand and supply for discretionary shopping, dining out, and other nonessentials dry up. Meanwhile, studios are on a hiatus while social-distancing orders are in place.

Without any box-office hits or theme park attendees, Disney's consumer products business doesn't have nearly as much to sell. That's exacerbated by retail stores closing physical locations as well. Disney times its toy releases with its film releases, and none of its big films have set premiere dates this year anymore.

The entire retail environment is getting hit by the reaction to the coronavirus, but Disney may actually be hit harder. Wells Fargo lowered its valuation of the consumer products business by nearly 60%.

The lone bright spot in Wells Fargo's new outlook for Disney is its video-streaming business. Both Disney+ and Hulu got a boost, while ESPN+ and streaming technology business BAMTech saw their valuations remain unchanged.

Indeed, consumers appear to be signing up for Disney+ in droves while staying at home. Disney just announced the streaming service now has more than 50 million subscribers after just over five months in operation. The kids' programming on the platform may be especially appealing now that parents are stuck trying to work from home while their children are out of school.

Disney's bundling strategy appears to be working, leading to higher sign-ups for Hulu and ESPN+ when more people sign up for Disney+. Additionally, Disney recently expanded the appeal of Hulu by offering FX's library on the streaming service. That said, Hulu will likely see a negative impact from the difficult ad environment. Interestingly, Wells Fargo analysts increased their valuation for Hulu more than they did Disney+ -- perhaps due to overall increased demand for streaming content.

Not great, not terrible

Overall, coronavirus has been bad for Disney's business. How quickly Disney bounces back depends largely on how soon it can reopen its parks to the public and whether it can get its films in theaters in time for the summer blockbuster season. Wells Fargo isn't optimistic about either possibility and with good reason. The environment is very uncertain, and consumers will likely be very cautious about gathering in big crowds even after parks and theaters open back up.

However, Disney's long-term advantages of its strong brand, intellectual property portfolio, and scale haven't changed. So, the massive tumble its stock price has taken may present a good buying opportunity for investors.