Please ensure Javascript is enabled for purposes of website accessibility
Log In Help Join The Motley Fool
Free Article Join Over 1 Million Premium Members And Get More In-Depth Stock Guidance and Research
By Evan Niu, CFA - Apr 10, 2020 at 11:00AM

The software giant is reportedly running into development challenges with Windows 10X.

Late last year at Microsoft's (MSFT -0.26%) annual fall product event, the enterprise-software juggernaut teased two new product prototypes that were scheduled to ship in late 2020: the Surface Neo and Surface Duo. The devices have similar form factors, each featuring a folding design with two displays. The Duo is an Android phone -- Microsoft would prefer that you don't call it a phone -- while the Neo is essentially a foldable tablet that runs Windows 10X, a specialized version of Microsoft's flagship operating system.

That bold vision for the future of computing is now reportedly getting delayed due to the coronavirus outbreak. 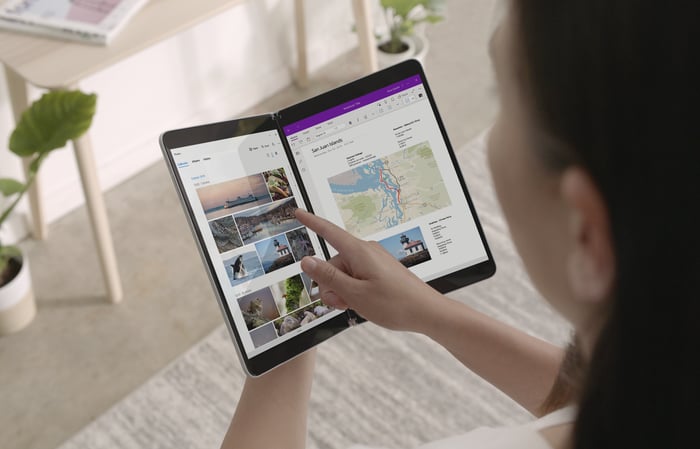 ZDNet reports that Microsoft is delaying the Neo, which won't be ready to ship by the 2020 holiday season as originally planned. The delay was also corroborated by CNBC. The issue doesn't appear to be related to hardware constraints or supply chain disruptions, as much of the consumer electronics supply chain is being resurrected in China as the country has seemingly overcome the coronavirus.

Instead, development of Windows 10X is running into hurdles. The variant is designed to enable dual-screen PCs, but Chief Product Officer Panos Panay reportedly sent an internal memo that Windows 10X won't be ready to ship this year. As a result, Microsoft's engineering teams are now focusing on getting the operating system to work on single-screen devices first, according to ZDNet. That would include hybrids and convertible form factors, as well as regular clamshell laptops.

The Duo's timeline doesn't appear to be affected quite yet, which would make sense since the smartphone will run on Android instead of Windows 10X. A few months back, Microsoft released developer tools for the Duo. The tech giant's re-entry into the smartphone market might still be on track.

Microsoft had warned in February that its personal computing segment would fall short of guidance due to the impacts of COVID-19, as the supply chain was taking longer than expected to return to normal.

Windows 10X lays out Microsoft's direction for where it thinks computing should go in the years ahead, and comes just as longtime rival Apple (AAPL -0.14%) is embracing hybrid form factors like never before. In one of its biggest changes to the iPad to date, the Mac maker recently added cursor (trackpad and mouse) support to iPadOS. The forthcoming Magic Keyboard for iPad is among Apple's most aggressive moves to position its tablet as a true laptop replacement.

If Windows 10X dual-screen devices eventually prove to be commercially successful in a few years, will Apple follow in Microsoft's footsteps once again?