These tech companies were founded more than 30 years ago, and they are poised to remain leaders over the next decades.

If you're a long-term investor, the daily variations in the stock market shouldn't distract you -- even today, when coronavirus-induced uncertainties amplify the volatility. Instead, you should focus on picking leaders in industries with long-term growth prospects. That's easier said than done, but the rewards can be significant.

Here are three tech stocks that should keep on growing after having turned $10,000 into more than $6 million over the last few decades, despite the dot-com bubble, the financial crisis, and the coronavirus pandemic.

Cisco Systems (CSCO -1.19%) was founded in 1984 and became publicly traded in 1990. At that time, Cisco was a profitable high-growth tech specialist, selling hardware products -- mostly routers and switches -- that connect computers and networks.

During fiscal 1990, revenue increased to $69.8 million, up 152% year over year, and profits under generally accepted accounting principles (GAAP) reached $13.9 million.

Over the years, the tech giant further developed its offerings and acquired many companies to enhance its portfolio. It also expanded its footprint into areas such as cybersecurity, communications, and applications to profit from cross-selling opportunities with its networking solutions.

Today, Cisco's core business still consists of selling networking products, but the company has been updating its portfolio to remain relevant for the next many years. For instance, Cisco's software-as-a-service (SaaS) platform Webex -- which has become more popular with the enforced stay-at-home policies to limit the spread of the coronavirus -- provides communications capabilities from anywhere.

As a result, revenue reached $51.9 billion in fiscal 2019. Moreover, the company remains highly profitable, thanks to its scale, with GAAP net income of $11.6 billion last year. Logically, the stock has provided a healthy return for early investors. An investment of $10,000 at Cisco's initial public offering (IPO) would now amount to $6.6 million, and that excludes the dividends the tech giant started paying in 2011. 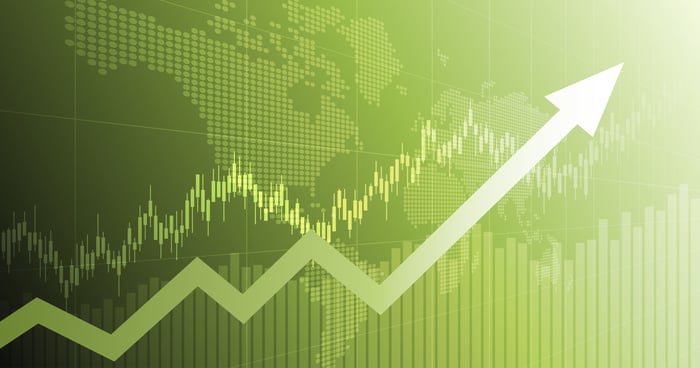 Intel (INTC -1.96%) was founded in 1968. When it became public in 1971, the semiconductor specialist generated revenue of $9.4 million and turned a GAAP profit for the first time with net income of $1 million, thanks to its memory chips business.

Through its research and development efforts, boosted by acquisitions, Intel developed central processing units (CPUs) for computers. In 1981, IBM selected Intel's microprocessor to run its first mass-produced personal computer (PC). Since then, Intel has dominated the PC market. According to Steam's hardware and software survey in March, 81.25% of respondents were running Intel microprocessors.

In addition, Intel reigns over the server CPU market with a market share of 95% during the fourth quarter of last year. And management aims to expand the company's leadership into new growth opportunities, such as 5G, artificial intelligence (AI), and autonomous driving.

Last year, Intel's revenue grew to $72 billion, and GAAP earnings reached $21 billion. As a result of this impressive growth since 1971, $10,000 invested at Intel's IPO would have grown to $29.5 million by now, and that excludes any dividends you would have collected since 1992.

Bill Gates founded Microsoft (MSFT -1.27%) in 1975, and the software company sold its shares to the public in 1986. Microsoft's early success was due to its operating system, known as DOS, that worked with Intel's processors.

Microsoft expanded its footprint the same way Cisco and Intel did: It internally developed its offering and acquired companies to enhance its portfolio in areas that supplemented its existing solutions. The Microsoft Office productivity software suite and the Windows operating system probably remain the most relevant illustrations of these synergies.

Since current CEO Satya Nadella took over in 2014, the company has embraced cloud-computing technology. Microsoft's empire now encompasses a wide range of complementary areas, such as video gaming with Xbox and social networks with LinkedIn.

Thanks to its success, Microsoft grew its revenue and GAAP net income in fiscal 2019 to $125.8 billion and $39.2 billion, respectively. The company's stock price reflects this stellar trajectory: A $10,000 investment at Microsoft's IPO would have turned into a small fortune of $22.6 million, without taking into account the dividends the software giant has paid since 2004.

Following their impressive growth over the last few decades, these three tech stocks generate huge profits that should still climb, since they have transformed their businesses to address secular growth opportunities, such as cloud computing and 5G. Thus, long-term investors should still consider investing in these dominant tech companies.