PepsiCo (PEP -0.07%) shares have slipped 2.2% so far this year, dramatically outperforming the rest of the market. As the coronavirus outbreak expanded last month, weighing on companies' supply chains and sales, the S&P 500 plunged into bear-market territory. The index has now recovered a bit and is down 14% since the start of 2020.

PepsiCo's presence in snacks may have helped it resist steep declines as shoppers stocked their shelves with food in preparation for lockdowns. As a result, PepsiCo's sales may have fared better than sellers of nonessential items during the first quarter. Now, investors may be wondering if the company has what it takes for long-term revenue and share gains. 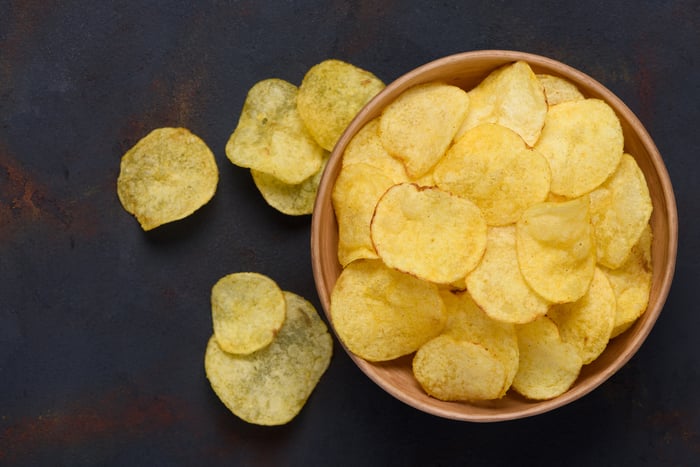 PepsiCo owns 22 brands -- such as Pepsi soft drinks, Lay's chips, and Tropicana juices -- that each bring in more than $1 billion in annual retail sales. Though rival Coca-Cola (KO -0.12%) has a stronger position in carbonated soft drink sales in many markets outside of the U.S., PepsiCo is the leader in U.S. liquid refreshment beverage sales. Last year, PepsiCo represented 22% of U.S. liquid refreshment beverage retail sales, while rival Coca-Cola held a 20% share, according to PepsiCo's 2019 annual report. And though most people think of Pepsi soft drinks when they think of the company, PepsiCo actually gets a majority of its revenue from the food category -- 54% versus 46% in the beverage category.

In February, PepsiCo announced it would buy Hangzhou Haomusi Food Co. of China (commonly known as Be & Cheery) for $705 million. Be & Cheery is one of China's largest online snack companies, selling nuts, dried fruit, and other items. At the moment, the Asia Pacific region only makes up 4% of PepsiCo's overall sales. But here's why PepsiCo's plan to expand in snacks there is a good idea: The Asia-Pacific region represents the fastest-growing snack market, led by demand from China, according to Mordor Intelligence.

On the heels of the Be & Cheery acquisition, PepsiCo announced another acquisition that should boost future growth. The company is buying Rockstar Energy Beverages, a maker of energy drinks, for $3.85 billion. PepsiCo already had a North American distribution agreement with the company, but this deal allows it to expand more aggressively into the energy drinks market. Globally, the market is expected to grow at a compound annual growth rate of 7.2% to reach more than $86 billion by 2026, an Allied Market Research report showed.

Even without these new growth drivers, PepsiCo has reported annual revenue increases for the past three years, and the company has surpassed analysts' earnings estimates for the past four quarters. In its fourth-quarter earnings report, PepsiCo announced a 7% increase to its dividend, bringing its annualized payout to $4.09 per share. This represented its 48th consecutive annual dividend increase.

PepsiCo shares are trading near a record high and are slightly more expensive in relation to trailing earnings than shares of rival Coca-Cola. Still, PepsiCo has what it takes to keep revenue growing, and the stock offers investors an attractive dividend. Investors should consider buying the shares on any weakness and making them a part of their long-term holdings.