Please ensure Javascript is enabled for purposes of website accessibility
Log In Help Join The Motley Fool
Free Article Join Over 1 Million Premium Members And Get More In-Depth Stock Guidance and Research
By Rhian Hunt - Apr 13, 2020 at 10:57AM

Posting on its Day One blog this morning, Amazon.com (AMZN -1.13%) says it's looking for another 75,000 part-time and full-time workers to supplement the approximately 100,000 it has already hired over the past month. The retail giant notes demand continues to skyrocket as people order food and other items over the internet as an alternative to visiting brick-and-mortar stores during the coronavirus pandemic.

Amazon says it already hired the 100,000 workers it started looking for back on March 16. The new employees have already been put on the job at facilities nationwide. Now, with all of its capacity taken up and demand still increasing, the retailer needs more people to keep its business running smoothly. It already suspended its Amazon Delivery service starting in June, in order to concentrate its resources on in-house fulfillment needs instead of delivering for other companies. 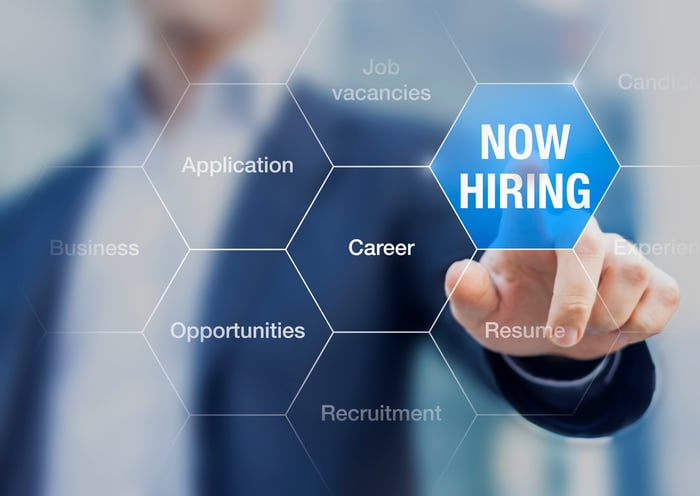 Amazon describes its latest job push as a way for people displaced from the restaurant industry or other sectors by the coronavirus to find work until things return to normal. It clearly expects many of the new jobs to be temporary, adding, "we welcome anyone out of work to join us at Amazon until things return to normal and their past employer is able to bring them back."

The company has raised employee hourly pay by $2 per hour in the U.S., with similar pay boosts in Canada and Europe. It says it previously invested $350 million in this wage program. With the new hiring surge, it expects this amount to rise to roughly $500 million in total.