The company wants to avoid having to furlough personnel.

Walt Disney (DIS -3.79%) has been hit on multiple fronts by the impact of the coronavirus pandemic. Its theme parks, hotels, and cruise ships are all closed for business, and ESPN has to continue to air with lower ad revenue and less to show since the sports world -- as least the live-games part -- has shut down.

Now, to save money, the company has asked about 100 on-air personalities to cut their pay by 15% for 90 days, Sports Business Journal first reported. The cuts are being called voluntary, and the people on the list are the highest paid at the network. 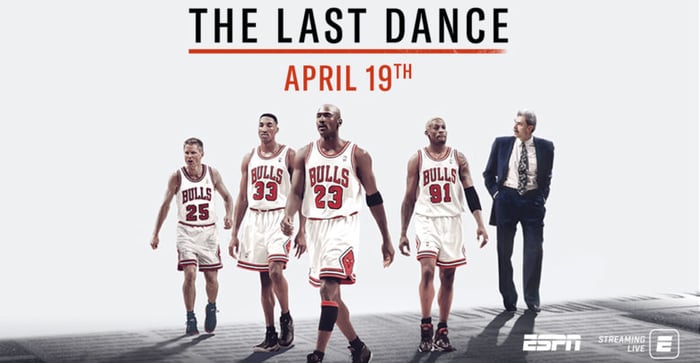 ESPN has sped up the release of its miniseries on the Chicago Bulls. Image source: ESPN.

What is ESPN doing?

Essentially, ESPN is asking people who high-six- and seven-figure salaries to take a cut so the company can avoid furloughing ESPN workers who make much less than that. The sports channel's top executives have also taken cuts -- some up to 30% at the top levels of the company.

"We are asking about 100 of our commentators to join with our executives and take a temporary salary reduction. These are challenging times, and we are all in this together," ESPN said in a statement sent to SBJ.

Will this be enough?

It's hard to know what ESPN's immediate future will be. It has the NFL draft in a couple of weeks (April 23-25), and that should give its shows something to talk about in the absence of sports. After that, however, the sports calendar gets awfully empty until some, or multiple, leagues figure out how to play actual games.

When that happens, ESPN may see some light at the end of the tunnel. Until then, the network, along with its parent company, faces a host of challenges.