Disney (NYSE:DIS) stock has fallen by more than 40% year to date. Investors have fled the Magic Kingdom as coronavirus-driven fear shutters its theme parks and puts its movie premieres on hold.

Coronavirus has shut down many parts of our society, and health experts don't yet have a grasp on when life can return to normal. However, current fears have little bearing on the long-term future of Disney. For this reason, Disney stock may now present a rare opportunity for Foolish investors.

For years, Disney stock appeared to trade on the prospects of its Media Networks division. Beginning in 2015, its stock price plateaued as customers cut the cord on the Disney Channel and ESPN by the millions. Instead, customers turned to lower-cost streaming services like Netflix and Amazon's Prime Video.

However, the launch of Disney+ altered that trend. Disney stock immediately shot higher in April 2019, when the company revealed more details surrounding its service. This optimism now appears justified. Disney+ came online in November 2019 as a "blockbuster launch" and netted about 10 million subscribers on the first day.

Now, coronavirus has dampened investors' optimism. As a result, Disney stock fell below $80 per share at one point last week, a level not seen since 2014! While it ended the week at $85.98, Disney remains well below levels seen as recently as one month ago. 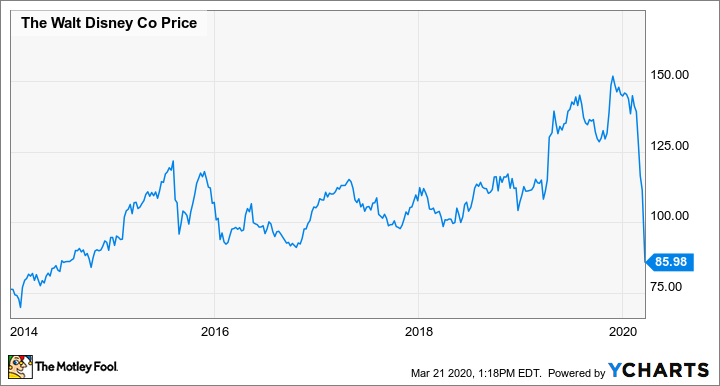 Between delayed movie openings and canceled sporting events, Disney divisions such as Media Networks and Studio Entertainment will probably see lower revenue. Still, the Parks, Experiences, and Products division will likely bear the brunt of the coronavirus-related effects on Disney due to the theme park closures.

This is a dramatic change of fortune for the only part of the company to log double-digit income growth in both 2018 and 2019. This division made up $26.2 billion of Disney's $69.6 billion in revenue last year, making it Disney's largest division by revenue, just ahead of the media networks segment, which includes the Disney Channel, ESPN, and ABC. Parks, Experiences, and Products also accounted for the majority of Disney's profit last quarter.

Additionally, the current quarter ends on March 28. With the company announcing its park closure on March 12, the next earnings report will reflect some of the lost revenue. Analysts are already projecting earnings to come in at $1.13 per share this quarter, down significantly from the $1.61 per share earned in the same quarter last year.

Despite the bleak short-term outlook, investors need to remember that this too shall pass. The massive drop in Disney stock actually looks like an opportunity to buy this blue chip stock at a discount. The company now trades for about 18 times forward earnings: a very modest premium to the S&P 500.

Moreover, even though earnings estimates have fallen for both this fiscal year and next, analysts still forecast earnings growth of 21.9% in fiscal 2021, a high level considering the forward P/E of less than 20. Furthermore, given overall market conditions, Disney stock's drop is not unusual. The S&P 500 has fallen by more than 30% from its 52-week high, only slightly less than the decline in Disney stock over the same period. 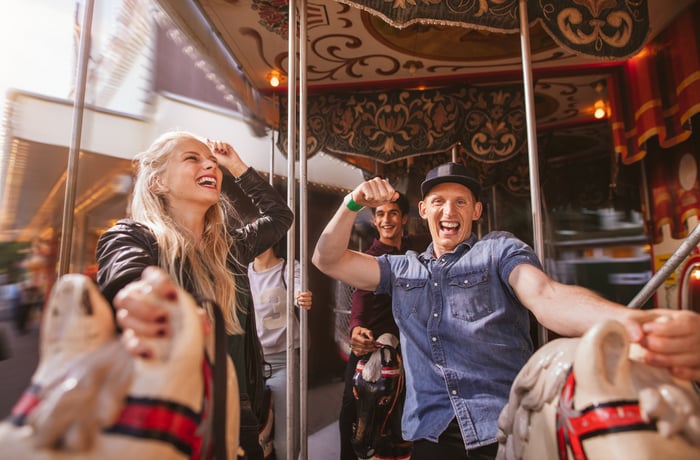 The stock swoon also does not change the fact that Disney owns a wide-ranging content library. This encompasses Disney originals as well as content from Pixar, Lucasfilm, Marvel, and other studios, including programming recently acquired from 20th Century Fox. Many investors will recall that Disney stock shot higher upon the release of Disney+ in November. According to outgoing CEO Robert Iger, Disney+ reached 28.6 million subscribers by early February. Hence, Disney+ will likely serve as a bright spot for the company for the foreseeable future.

Additionally, revenue should come back once the theme parks reopen. Single-day tickets start at $109 at Walt Disney World. Though attendance fell 2% in 2019, higher ticket prices helped to boost revenue from theme park admissions to $7.54 billion: up 5% year over year.

Disney faces challenges such as closed theme parks and canceled sporting events that understandably worry investors. However, the stock trades at a price not seen in years, and prospective buyers should remember that Disney's offerings have attracted interest for decades. Once coronavirus becomes a fear of the past, many may wish they had bought Disney stock at its current price.