Please ensure Javascript is enabled for purposes of website accessibility
Log In Help Join The Motley Fool
Free Article Join Over 1 Million Premium Members And Get More In-Depth Stock Guidance and Research
By Timothy Green – Apr 13, 2020 at 11:07AM

Disney's former CEO is apparently back in charge, and analysts see trouble ahead for Caterpillar.

Last week's rally didn't survive the holiday weekend, with the Dow Jones Industrial Average (^DJI -1.71%) down about 2.4% at 11:10 a.m. EDT Monday. While the coronavirus might be close to peaking in the United States, the measures put in place to slow the spread will likely have long-lasting economic effects.

There are few large companies more heavily exposed to the pandemic than Disney (DIS -3.20%), which has been forced to shut down its parks and delay movies. Disney stock was down on Monday after a report revealed that former CEO Bob Iger was apparently running the show. Shares of Caterpillar (CAT -1.10%) were also down big following an analyst downgrade.

Iger, who stepped down abruptly in January to become executive chairman after 15 years at the helm, is reportedly running the show again at the entertainment giant. The New York Times reported on Sunday that Iger had "effectively returned to running the company" as the pandemic puts intense pressure on most of Disney's businesses. 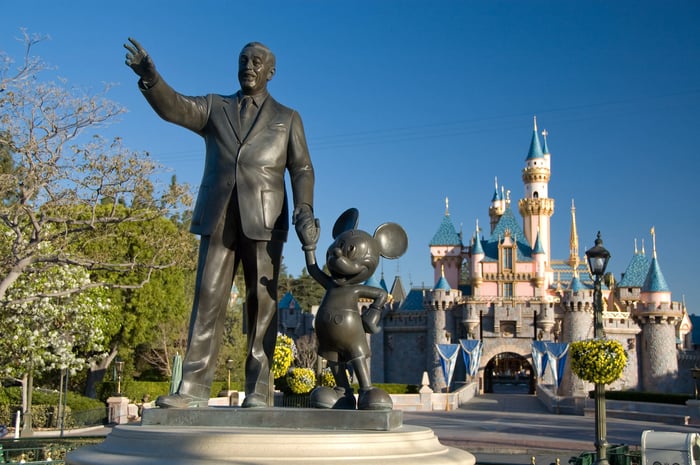 Disney's parks and cruise ships aren't operating, movie theaters are closed, and ESPN has no live sports to air. The only part of Disney that's thriving during the crisis is the Disney+ streaming service, which has rapidly grown to 50 million subscribers. But with production halted by the pandemic, new content for the service will be hard to come by.

Disney could be losing as much as $30 million per day, according to media industry analyst Hal Vogel. The company announced in early April that it would begin furloughing nonessential U.S. employees starting on April 19. On Saturday, the Service Trades Council Union announced that 43,000 unionized Disney World workers would be furloughed on that date.

Iger is reportedly considering big changes to how Disney does business, telling associates that advertising upfronts (gatherings of major advertisers to get them to buy ads ahead of time) and the practice of producing pilots for shows that may not air could come to an end. The company could also cut its use of office space when its businesses begin to reopen, and it could potentially reduce its headcount.

Once Disney's parks and the movie theaters are reopened, it's unclear how eager people will be to return. While measures put in place to slow the spread of the virus may begin to be eased in the next month or so, it may be quite awhile before things are fully back to normal.

Disney stock was down about 3.7% Monday morning, bringing its total losses from its 52-week high to roughly 35%.

Shares of heavy machinery manufacturer Caterpillar were hit hard Monday following an analyst downgrade. Analysts at Bank of America see the company's exposure to the energy industry as a problem that won't go away anytime soon. The stock was down about 8.6% in the morning.

Caterpillar pulled its outlook for fiscal 2020 toward the end of March due to the uncertainty surrounding the pandemic. But the company announced on April 8 that it would maintain its quarterly dividend of $1.03 per share for the time being. The next payment date is May 20. The company has paid quarterly dividends uninterrupted since 1933, and it's raised its dividend for 26 consecutive years.

Including Monday's rout, shares of Caterpillar are now down about 24% from their 52-week high.

These 2 Winners Shot the Stock Market Through Dow 35,000