Please ensure Javascript is enabled for purposes of website accessibility
Log In Help Join The Motley Fool
Free Article Join Over 1 Million Premium Members And Get More In-Depth Stock Guidance and Research
By Donna Fuscaldo – Apr 13, 2020 at 6:37AM

PC stocks are getting a boost as working and learning from home becomes the new norm during the COVID-19 pandemic.

With scores of companies ordering employees to work at home, schools shuttered around the country, and millions of people sheltering in place, demand for computer equipment is seeing a resurgence, which bodes well for PC stocks.

Demand for everything from software to laptops is surging, which is good news for an industry that was predicted to see lackluster year-over-year growth. The demand is also boosting the prospects for several PC-related tech stocks, all of which should enjoy sales growth as social distancing takes hold globally.

Among the companies benefiting from this newfound demand for laptops and computer peripherals are Logitech, the webcam, headset, and mice maker; HP, the computer and printer company; Micron, the memory semiconductor producer; and PC chipmaker Intel. 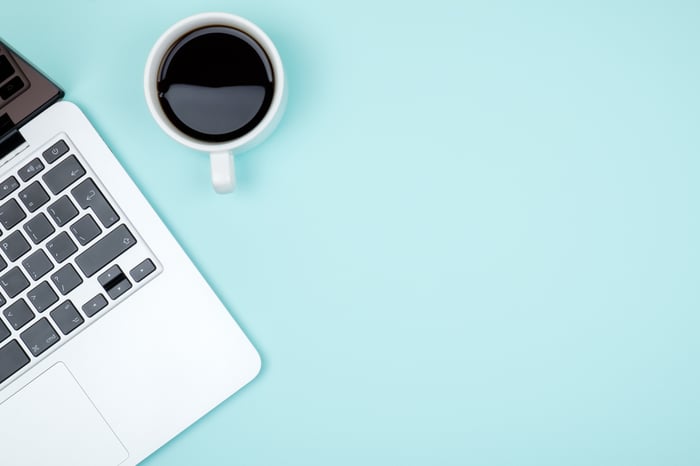 Software and collaboration tools also see a pickup in demand

But computers and peripherals aren't the only things in demand amid the pandemic -- so are software and collaboration tools to support remote work and e-learning. These are driving unprecedented demand for services offered by the likes of Microsoft (MSFT -1.27%), Zoom Video (ZM -0.12%), and Slack. Take Microsoft's "Teams" collaboration tool and Skype video conferencing, for example. Skype's average daily users are up 40 million, while calling minutes are 220% higher month-over-month in March. Teams recently passed the 44 million daily active users mark, up from 20 million in November.

Zoom, the hugely popular video conferencing app, said in March its daily active users topped 200 million. That compares to a peak of 10 million at the end of December.  Meanwhile, Slack recently said it's seeing a "massive outpouring of interest." Alphabet's Google Chrome laptops, and its productivity and collaboration software, are being used by millions of students, while Docusign is also seeing increased interest, as wheeling and dealing goes digital.

Work at home is here to stay

Without a doubt, the stay-at-home movement has driven demand for all sorts of technology, including PCs and peripherals. While that interest won't continue to grow unabated for too much longer, it could help PC companies weather what is a difficult and dark time for the world and the global economy. When Samsung  (OTC: SSNLF) reported preliminary first-quarter results earlier this week, it noted sales of memory chips helped it report a 5% year-over-year increase in sales. Samsung expects first-quarter operating profit to be up 2.7%.

As people spend more time online, data centers are experiencing an increased demand for memory chips. That's expected to remain throughout the second quarter, driving increases in chip prices and the memory chip maker's bottom line. This type of scenario could play out in other areas of the PC market well after the social distancing rules are lifted.

The newfound interest in PC stocks hasn't been lost on investors. Many have share prices that are down year-to-date but not as bad as they could be as the markets flip-flop between deep losses and gains.

Why? Investors likey believe that once the COVID-19 pandemic is contained, the work-at-home trend isn't going to go away. Sure, the demand may start to level off as the initial needs are met, but once the dust settles, many businesses are going to give more consideration to arming the remote workforce of the future. That means more dollars going to PC companies -- providing upside beyond the second quarter.