Please ensure Javascript is enabled for purposes of website accessibility
Log In Help Join The Motley Fool
Free Article Join Over 1 Million Premium Members And Get More In-Depth Stock Guidance and Research
By Lee Samaha - Apr 14, 2020 at 8:17AM

These three stocks all offer investors a useful income stream and have relatively stable end markets.

If you are going to commit to holding a stock for a long time, then it's a good idea to invest in companies with a secure recurring revenue stream -- that's where dividend aristocrats Ecolab (ECL 0.90%) and Pentair (PNR 0.40%) come in. The third option, Hormel Foods (HRL -0.13%) is a conservatively run company operating in very stable end markets. All three face some near-term pressure due to the COVID-19 pandemic, but if you can look beyond that, they are attractive for long-term holders. Here's why.

We already know that clean water and pool equipment company Pentair faces headwinds in 2020 because management has already withdrawn its first-quarter and full-year earnings guidance due to "suspensions of operations in several facilities due to COVID-19" and the possibility of further disruptions in the future. 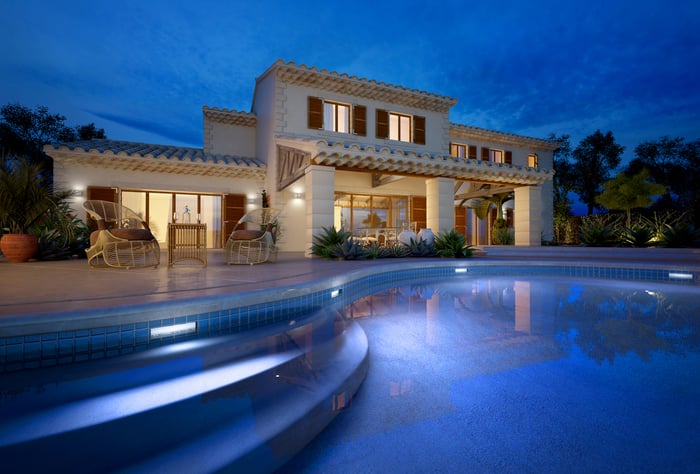 It's not good news, but it shouldn't detract from the long-term attractiveness of the company. In the last few years, management has spun off its electrical equipment business, nVent (NVT 0.45%) and sold its valves and controls business to another dividend aristocrat, Emerson Electric.

As such, Pentair is now a pure play water company (pumps, filtration equipment, and a range of pool equipment and accessories) with 80% of its revenue coming from residential and commercial customers. For example, swimming pool supply company Pool Corp is named as a significant customer (around 15% of consolidated net sales) in Pentair's filings at the SEC.

It's an attractive market because the overwhelming majority of its sales actually go to the aftermarket/replacement market -- something that should give earnings resiliency in a slowdown. Around 75% of consumer solutions segment sales go to the installed/aftermarket and 70% of industrial & flow technologies segment sales go to the installed/aftermarket/services market. "Installed" simply refers to its installed base of equipment, which, in the case of pools, is some 5.5 million.

Before the COVID-19 pandemic, Pool Corp was predicting its industry would grow at 4%-6% a year over the next five years, and if underlying growth returned to that kind of rate, then Pentair would be well placed to benefit.

After the recent stock market rally, the share price possibly doesn't reflect the near-term risk around the company, but given any further weakness from here, long-term investors are likely to find a good entry point into an attractive long-term story. 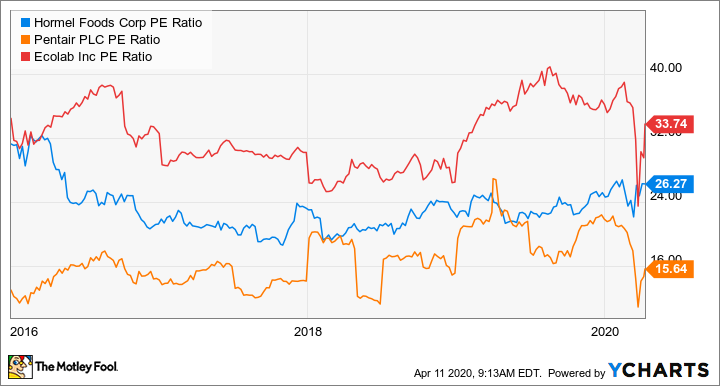 The food safety, hygiene, and clean water company appears to be one of two things right now. It could be seen as a company set for a sustained slowdown, as some of its key customers in the foodservice and hospitality industry are likely to see slow growth for many years to come.

Alternatively, consumers will return to hotels and restaurants, and its industrial customers will restart production after the COVID-19 pandemic is over. Moreover, an increased sense of awareness around public health and hygiene issues could lead to a positive effect on long-term sales growth.

If you take the former view, then Ecolab is worth avoiding. However, if you take the latter view, then now could be a good point to buy into an attractive long-term growth story. Ecolab is a company with 90% of its revenues recurring and has grown earnings at an annual rate of 11% over the last two decades. 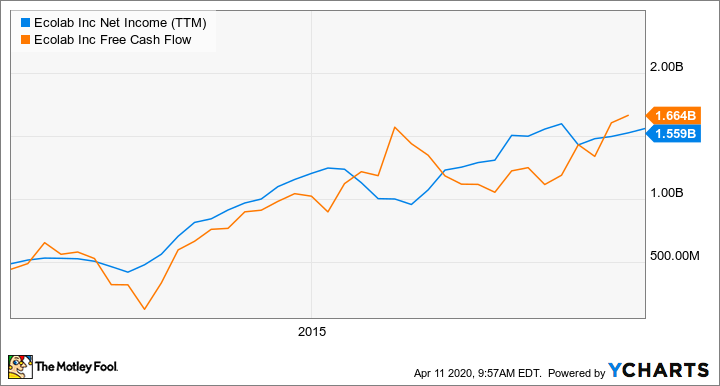 In addition, it has favorable mega-trends behind it such as increasing regulatory requirements around food hygiene. An emerging, and increasingly urbanized, middle class in developing countries is also seen as more likely to demand processed food and protein-rich meals. All told, Ecolab clearly faces near-term risk, but its long-term earnings drivers should remain intact even after the COVID-19 pandemic.

The interesting thing about Hormel Foods is the fact that it's 48% owned by the Hormel Foundation, an organization which includes providing "for the financial welfare of family heirs" as part of its aims. This kind of company structure tends to result in a relatively conservative management philosophy. That's something you can see in Hormel's rock-solid balance sheet -- a great thing to have in a recessionary environment. You can also see it in the company's proud record of increasing its dividend for 53 consecutive years.

As the chart below shows, Hormel has a very low debt-to-shareholder equity ratio, indicating a business that has been built up by reinvesting its own cash flow rather than taking on debt. 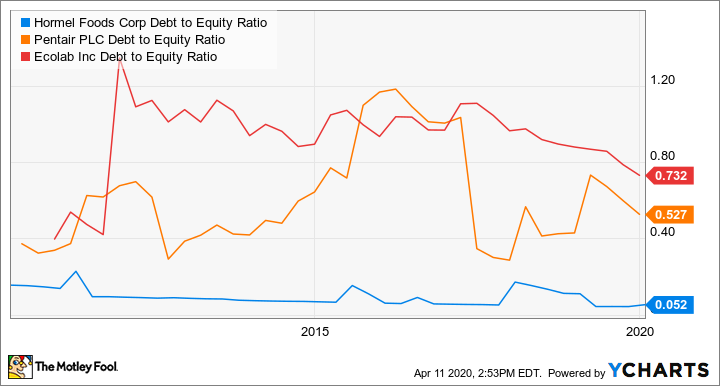 Aside from the relative security of its balance sheet and its impressive track record of growing profits, there are two other key reasons to buy the stock.

First, around 70% of its revenue goes to the retail and deli market, and the company is probably receiving a sales boost right now as consumers are staying at home due to social isolation measures -- although its foodservice sales (31% of revenue) are surely being hit hard in the near term. 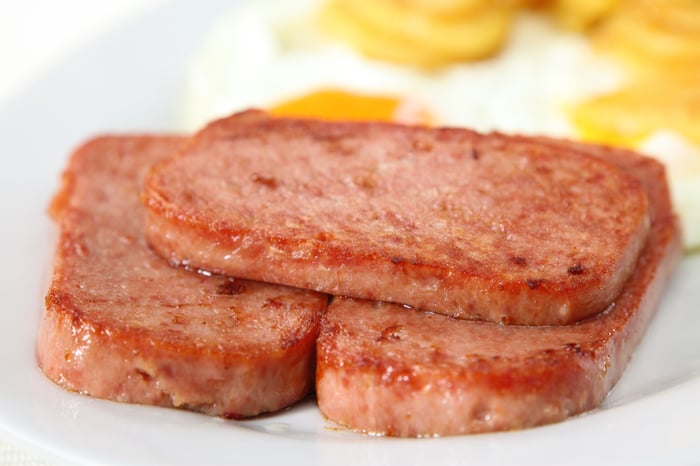 Second, Hormel is essentially a play on the increased demand for protein -- whether it's through retail, deli, or foodservice channels. Management plans to engage in an ongoing shift toward becoming a global owner of leading retail, deli, and foodservice brands. As such, it plays to the theme of consumers demanding more protein-based meals as they increase their income.