Please ensure Javascript is enabled for purposes of website accessibility
Log In Help Join The Motley Fool
Free Article Join Over 1 Million Premium Members And Get More In-Depth Stock Guidance and Research
By Jeremy Bowman - Updated Apr 14, 2020 at 7:03AM

Take a look at a few appealing stocks in the bargain bin.

There's no question the bear market has served up more than a few bargains for eager investors.

As of April 13, the S&P 500 was down 19% from its all-time high on February 2019. The sell-off sparked by the coronavirus has pushed a number of stocks under the $20 threshold. Though a low price alone isn't a sign of value, such a price offers a good entry for beginning investors who may not be keen to plunk down $2,000 for a share of a company like Amazon. Stocks trading under $20 are also appealing because they were often worth more than that in the past, setting up an opportunity for a rebound, especially in a market like this one. 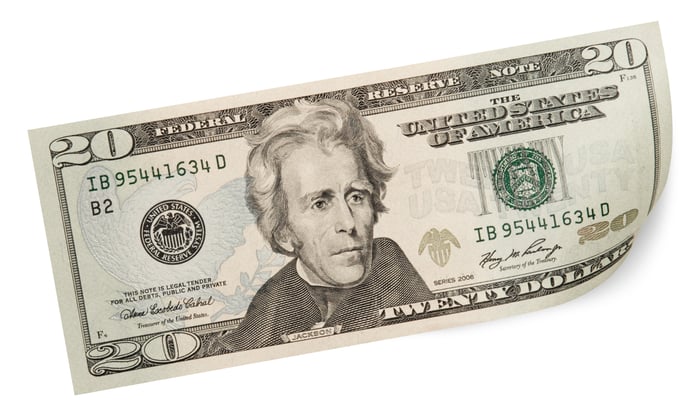 Pinterest shares were down as much as 50% at one point during the recent sell-off as investors backed away from unprofitable growth stocks like the rising social media star. Part of the logic seems to be that advertising is going down as businesses scale back on marketing while consumers are cooped up at home. Facebook, the social media leader, already confirmed that ad revenue was down even as user time was up, showing that businesses are more reluctant to spend in the current environment.

However, Pinterest is at a different point in its life cycle than Facebook -- the virtual pin board is more focused on user growth than profits. That means that the coronavirus crisis may be a tailiwind for the company, as it seems to be helping propel its user growth. The company finished the first quarter with between 365 million and 367 million monthly active users, well ahead of estimates at 345 million and up from 335 million at the end of 2019. 89 million to 90 million of those users were in the U.S. It also estimated revenue of $269 million-$272 million for the first quarter, up about 35% from the year-ago quarter and also ahead of estimates.

Pinterest pulled its guidance due to the COVID-19 outbreak, but investors should be heartened by the company's accelerated user growth, as it can monetize those users over the coming years.

For years, Sprouts Farmers Market has been one of the stronger operators in the supermarket industry as the natural foods grocer has posted consistent comparable sales growth. Like other supermarket chains, Sprouts has outperformed the market during the crisis. But investors may be underestimating the bump that grocery stocks could see -- as restaurants are likely to remain closed for at least the coming weeks, if not months, Americans will continue to rely on grocery stores for their food.

Sprouts has not yet provided an update on operations during COVID-19, but peers have reported that grocery sales have surged last month. At Target, for example, comparable sales of food and beverages jumped by more than 50% in March. Costco, meanwhile, saw comparable sales jump 12% in the U.S. after adjusting for fuel prices.

As a pure-play supermarket stock, Sprouts should get a stronger boost than those two companies, and the stock also provides a defense against further coronavirus-related problems like a second wave of infections or a slow reopening.

Even in a weak economy, people still need to do work on their homes. Things break, people move, and remodeling projects still happen. Though the home improvement sector is generally cyclical, ANGI Homeservices could do well in a recession, as the company has long had more demand on its home improvement marketplace than it has the capacity to serve through its network of service providers, as CEO Brandon Ridenour has said before.

In addition to balancing supply and demand, the recession could also drive more service providers onto the platform as they seek out more business. ANGI Homeservices has consistently grown in recent years, targeting long-term revenue growth of 20%-25%, but bottom-line growth has been disappointing at times. However, the stock is starting to look cheap according to some metrics. The company finished 2019 with $202 million in Adjusted EBITDA, and trades at a modest price-to-free cash flow ratio of about 20.

ANGI's near-term results could take a hit as lockdown orders are likely preventing home improvement work from getting done, but the sell-off offers a good long-term value for this promising growth stock.