Please ensure Javascript is enabled for purposes of website accessibility
Log In Help Join The Motley Fool
Free Article Join Over 1 Million Premium Members And Get More In-Depth Stock Guidance and Research
By Dave Kovaleski – Updated Apr 14, 2020 at 8:01AM

Market volatility is not a bad thing for this stock.

Cboe Global Markets (CBOE -0.31%) is one of the world's largest option markets. But it may be best known -- particularly now -- for the Cboe Volatility Index, or VIX.

The VIX measures stock market volatility, which we've had plenty of these days. It is a forward measure, so it gauges expected volatility for the next 30 days based on option prices for the S&P 500.

Over the past several years, the VIX has mostly been in the teens, give or take a spike here and there. But in late February it moved up over 40, and it's pretty much been over 40 since -- peaking over 82 on March 16, when the S&P 500 fell almost 12%. That was the highest score ever, besting the mark set in 2009 during the Great Recession. As of Monday, the VIX was still over 40.

So, what does this have to do with Cboe's stock? A lot. 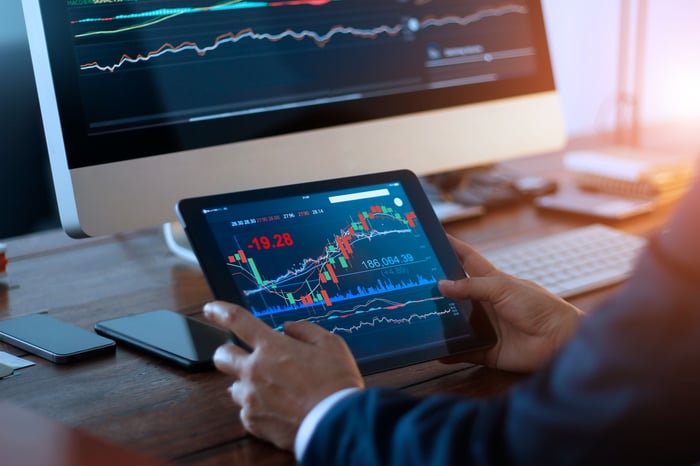 Cboe -- founded in 1973 as the Chicago Board Options Exchange -- is the largest options trading market in the country. That's especially helpful now, considering one key function of options is helping investors manage their risk.

Cboe makes money by facilitating trades through its various products, offering trading for options; futures; U.S. and European equities; exchange-traded funds; and other investments. And trading activity has been off the charts, as volatility prompts investors to move their money around. In March, Cboe reported that the average daily volume (ADV) of trades was up across the board, with options up 69%, futures up 35%, U.S. equities up 129%, and European equities up 29%, year over year.

This all goes directly to Cboe's strength. A little more than two-thirds of its revenue comes from transaction fees, and its product mix is dominated by options (39.4% in 2019) and equities (48.6%).

Cboe's stock has been volatile itself this year. It suffered a sharp drop along with other financial companies in early March; as a result, its stock price plunged and its price-to-earnings (P/E) ratio dropped to around 22. Since then, the stock has been climbing back, up around 22% since March 18. it's currently down about 22% year to date through April 13.

And last year, when the S&P 500 was up over 28%, Cboe slightly underperformed, up about 23% due to lower volatility and less trading than usual.

But Cboe has strong overall earnings potential and has continued to diversify its revenue stream with its first-quarter acquisitions of Hanweck, a real-time risk analytics firm, and FT Options, a portfolio management platform provider. It is also in the process of buying EuroCCP in an effort to expand its derivatives trading and clearing business in Europe. Plus, last year the company completed its migration to a new technology platform, which facilitates the trading process and improves risk control for customers. It also resulted in $80 million in run rate synergies, with another $5 million expected this year.

In a market where positive returns are hard to find, Cboe is a good choice for investors. And over the past five years, its 63% gain has roughly doubled that of the S&P 500. So it's not only a good stock during this volatile market, it's good for the long run.