Money is on the way. At least that's the case if you're among the 80 million Americans who qualify for the coronavirus stimulus checks funded by the Coronavirus Aid, Relief, and. Economic Security (CARES) Act signed into law last month.

For too many, the $1,200 payment will be needed simply to make ends meet. Others, though, will have extra money to spend or to invest. If you're in the latter group, investing your stimulus check makes a lot of sense with the stock market still down by a double-digit percentage from the highs set earlier this year.

But which stocks are great picks that could generate explosive growth over the next several years? Here are three stocks to buy to get a big bang for the buck with your coronavirus stimulus check. 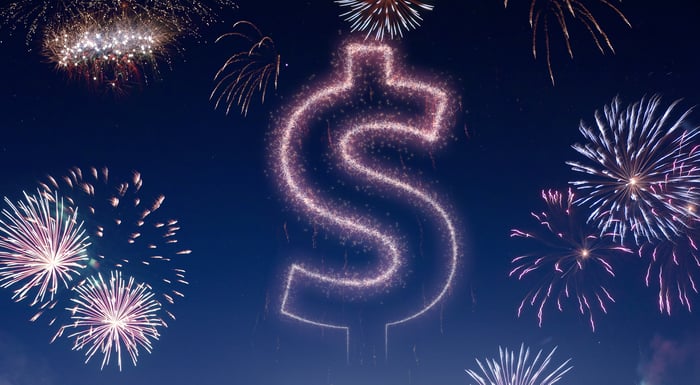 Shares of MongoDB (NASDAQ:MDB) sank as much as 45% in mid-March before bouncing back nicely. But the stock is still down well below its previous highs. I think buying MongoDB now will enable patient investors to reap tremendous gains over the long run.

The last two letters of MongoDB's name reveal the company's focus on the database market. But MongoDB's database is different from the big players in the industry in a couple of important ways. First, it was designed from the ground up for the unstructured data that's being generated in massive quantities today, like images and videos. Second, MongoDB created its database to be run from anywhere, including the cloud.

I really like the first part of the company's name, though, because it hints at the size of the opportunity that lies ahead. "Mongo" is short for "humongous." And MongoDB definitely has a humongous opportunity. The global database market is expected to grow to $97 billion by 2023 from $71 billion this year. MongoDB currently captures less than 1% of the market, but it's growing faster than its much larger rivals.

A major key to MongoDB's success is its Atlas cloud-based database-as-a-service. The company reported 80% year-over-year sales growth for Atlas in Q2, with the fully managed cloud database now generating 41% of MongoDB's total revenue. I expect Atlas will continue to fuel MongoDB's tremendous growth and help the company snag a lot more of the expanding global database market over the next five years.

Fastly's (NYSE:FSLY) name also hints at what the company does -- delivering web content to users faster than other technologies. The company's platform moves data and applications closer to users at the edge of the network, the point right before an organization loses control of its data.

The edge cloud platform and content delivery network technology offered by Fastly will almost certainly enjoy even greater demand in the future with the rise of 5G wireless networks. While major cloud services providers including Amazon.com and Microsoft will compete against Fastly, the growth in the overall market should be enough for multiple winners.

Fastly stock now trades at a double-digit percentage discount from earlier this year. It's still expensive based on conventional valuation metrics but with its strong growth prospects, I think this tech stock will be a winner over the long term.

In keeping with our theme of what's in a name, Editas Medicine (NASDAQ:EDIT) also picked its corporate name to indicate the business it's in. The company is a leader in the development of gene-editing therapies that use CRISPR, a method of gene editing that has been hailed as the biotech discovery of the century.

Unlike MongoDB and Fastly, Editas can't boast of impressive revenue growth yet. That's because the company is still several years away from the possibility of winning regulatory approval for its first drug. But Editas is making progress toward the goal of launching its first product.

In March, Editas and its partner, Allergan, dosed the first patient in the world's first clinical study in humans evaluating an in vivo (inside the body) CRISPR gene-editing therapy. This study will assess the safety, efficacy, and tolerability of a CRISPR therapy targeting Leber congenital amaurosis type 10 (LCA10), the most common cause of genetic childhood blindness.

Editas is also working on advancing a promising CRISPR therapy for treating rare genetic disorder sickle cell disease and hopes to file for approval by the end of 2020 to begin a clinical study. It's also developing an experimental CRISPR therapy for treating solid tumors. The biotech stock is the riskiest of these three, but if Editas is successful with its gene-editing programs it could potentially be the biggest winner of all.