Please ensure Javascript is enabled for purposes of website accessibility
Log In Help Join The Motley Fool
Free Article Join Over 1 Million Premium Members And Get More In-Depth Stock Guidance and Research
By Robert Izquierdo - Apr 15, 2020 at 8:45AM

When comparing these two well-known tech companies, one emerges as the clear winner.

Few technology companies are as iconic as Apple (AAPL 1.62%) and IBM (IBM -0.05%). Both experienced periods of market dominance as well as struggle, and in the fast-moving technology sector, it's easy for a company to fall behind.

For these two storied tech brands to continue, both must keep evolving. IBM is doing so in the business-to-business (B2B) sphere, while Apple is tackling business-to-consumer solutions. Let's look at the approach of each to determine which company is a better buy for investors. 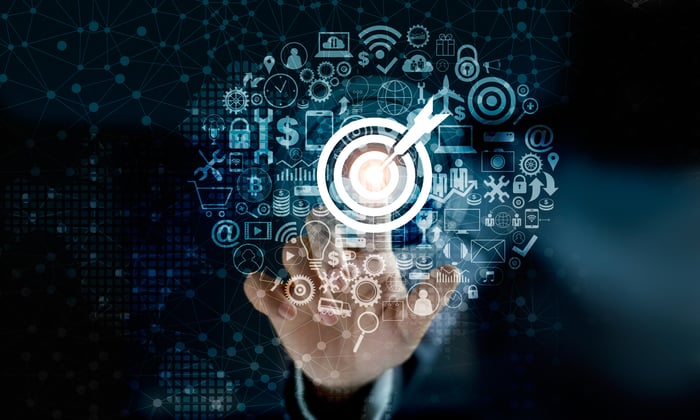 Apple is known for its consumer products, particularly the iPhone and Mac computer. These two product lines generated over $63 billion of the company's $91.8 billion in revenue in Apple's fiscal 2020 first quarter ended Dec. 28, 2019. However, the company has built a substantial revenue stream from its digital services. In Q1, Apple earned $12.7 billion from its services division, a record high and a 17% year-over-year increase.

This division includes a large suite of services, many of them subscription-based, which generates recurring revenue for Apple. It encompasses the company's array of books, music, movies, and other digital content as well as iCloud, a cloud-storage service, and its AppleCare extended warranty program.

Also included is Apple News+, which launched last year as a premium complement to its free Apple News app, offering access to publications that require a subscription. Apple TV+, another new addition, is the company's answer to a streaming content service akin to Netflix.

But among its brightest service division stars is Apple's App Store and Apple Pay. The App Store is the company's digital marketplace, allowing consumers to buy apps from third-parties. In its 10-K filing, Apple stated the App Store was a key contributor to its services business enjoying year-over-year revenue growth.

Meanwhile, according to CEO Tim Cook, Apple Pay revenue and transactions more than doubled year-over-year. Apply Pay now generates over 15 billion transactions per year. The mobile payment service enables Apple to participate in the rising fintech space and will continue to grow as more consumers transition to paying with mobile phones.

IBM is poised for a resurgence after a lackluster 2019. The company has a new CEO, Arvind Krishna, who began his tenure on April 6. On that day, Krishna announced that the company will focus efforts on its hybrid cloud and artificial intelligence (AI) solutions for businesses. A hybrid cloud approach offers companies the cost savings and flexibility of public cloud solutions, along with the security and control of a private cloud infrastructure.

Krishna also wants to leverage IBM's acquisition of Red Hat to create a new technology standard for businesses. Red Hat was acquired for its cloud-computing technology built on Linux, an open-source operating system rivaling Microsoft's Windows. This acquisition allows IBM to improve its position against competitors in the red hot cloud-computing space. In fact, IBM's total cloud revenue for the fourth quarter that ended Dec. 31, 2019, was up 21% year-over-year.

However, its cloud offerings were one of the few bright spots as IBM's total revenue for the full year was down 3.1% compared to 2018. The company has struggled with revenue growth for the past few years, as this chart shows. 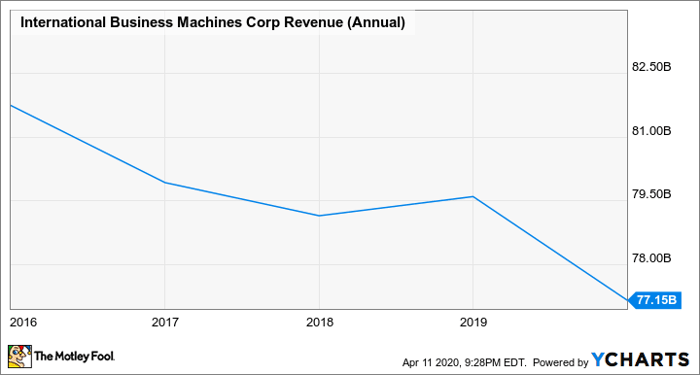 Krishna was chosen to be the new CEO after leading IBM's cloud division. This part of the business is slowly growing to become a larger piece of IBM's revenue pie, accounting for $23.2 billion of the company's $77.1 billion in 2019. Krishna is just getting started, so it will be a few quarters before the impact of his decisions are reflected in IBM's financials.

Both Apple and IBM are solid companies, and as icing on the cake, both offer dividends. But when it comes to which is the better buy, Apple is the superior choice right now.

Apple's consumer products continue to sell well, and with its legions of loyal customers willing to upgrade their devices as technology evolves, this core part of its business is in a solid position to generate revenue for years to come. Apple only increases its strength through its expanding services division, which is growing well, and thanks to key offerings like Apple Pay, this tech giant is set to continue this growth.

Meanwhile, IBM is a company in transition. It's doubling down on its successful cloud-computing division, but it will be some time before the strategy bears fruit. Coupled with the fact that IBM competes with giants in the space like Microsoft and Amazon, and it will be challenging for IBM to grow market share. That's why Apple is the clear winner in this match-up.