The U.S. government has the numbers: COVID-19 clobbered upscale clothing retailers in March.

Shares of brick-and-mortar retailers specializing in upscale clothing were falling on Wednesday, after a preliminary edition of the U.S. Census Bureau's monthly retail report indicated that sales of apparel and accessories fell by more than half in March as stores closed amid the coronavirus pandemic.

Here's where things stood for the stocks of these three companies as of 2 p.m. EDT today, relative to their closing prices on Tuesday.

The Census Bureau report quantified what we already knew: The effects of the COVID-19 outbreak have hit American retail companies very hard. According to the report, overall retail and food-service sales fell 6.2% in March from a year ago. And some sectors were hit much worse. 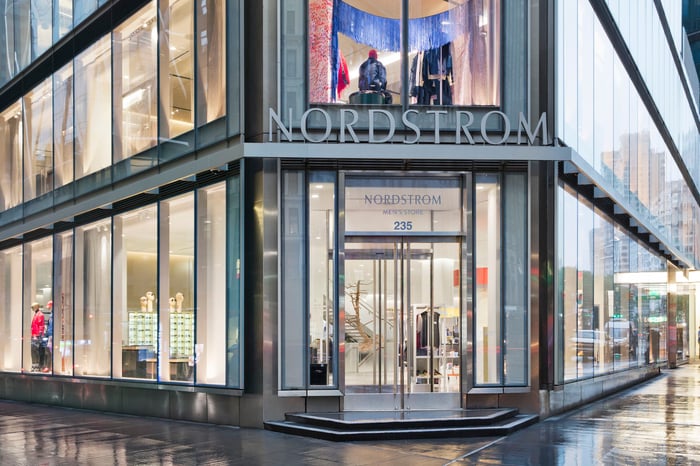 Specifically, sales at stores focused on clothing and accessories fell to $10.6 billion from $22.1 billion in March 2019, according to the raw data in the report. That's a decline of 52%, simply unprecedented.

That said, it shouldn't be too much of a surprise to retail-focused investors who have been following Nordstrom, Ralph Lauren, or Urban Outfitters. Given that all three companies closed their retail locations in North America in mid-March (Urban Outfitters on March 14, Nordstrom on March 17, and Ralph Lauren on March 18), it seems plausible that their in-store sales would have fallen by roughly half from March 2019.

To varying degrees, all three have probably been able to make up some of the lost sales via their online storefronts. But that won't make up all of the lost sales -- or in Ralph Lauren's case, the lost orders from other retailers that sell its apparel, home goods, and accessories.

Investors in these three companies will have to wait until next month for detailed updates from senior management. Urban Outfitters will report its fiscal 2021 first-quarter results on May 19. Nordstrom and Ralph Lauren haven't yet set dates for their next quarterly reports, but both typically report in the last two weeks of May.