Please ensure Javascript is enabled for purposes of website accessibility
Log In Help Join The Motley Fool
Free Article Join Over 1 Million Premium Members And Get More In-Depth Stock Guidance and Research
By Aditya Raghunath - Apr 16, 2020 at 10:12AM

These two semiconductor stocks are not just trading at low valuations -- they also have high dividend yields.

Value investors are always on the lookout for stocks that are trading below their intrinsic values. These stocks generally have low price-to-earnings ratios, low price-to-book ratios, and low price-earnings-growth (PEG) ratios. The recent market sell-off dragged many stocks lower, making them attractive at current valuations.

While the forward P/E ratio for the information technology sector as a whole now stands at 20, according to a FactSet report, there are several tech stocks that are trading at lower P/Es than that. Here we look at two such stocks that I feel could gain significantly on a market rebound.

Chip-manufacturer Broadcom (AVGO -2.37%)has a forward P/E multiple of 11.5 and an estimated 5-year PEG ratio of 0.87, making it one of the top tech stocks for value investors to consider today. And based on its forward dividend yield of 5.1%, the semiconductor heavyweight should be on the radar of income investors too.

Broadcom has withdrawn its full-year guidance given the current economic uncertainty and the declines in enterprise and consumer confidence. 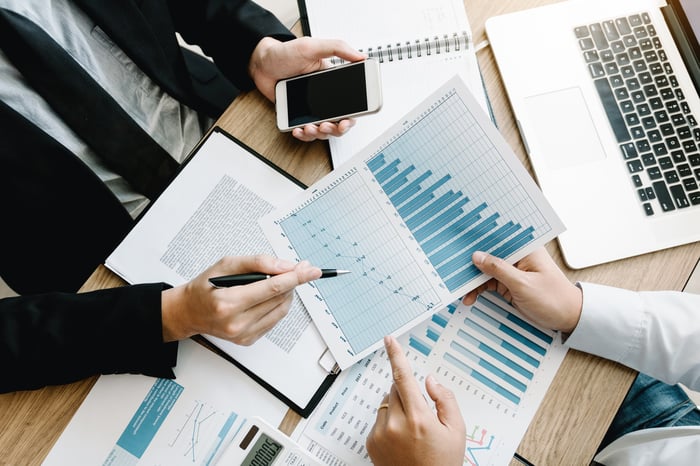 "The fundamental semiconductor backdrop has been improving, and we did not see any material impact on our businesses due to COVID-19 in our first quarter," said President and CEO Hock Tan. "However, visibility in our global markets is lacking and demand uncertainty is intensifying. As a result, we believe it prudent to withdraw our annual guidance until visibility returns to pre COVID-19 levels."

The coming decline in semiconductor demand, if there is one, should be offset by Broadcom's infrastructure software business, which generates recurring revenue through multiyear contracts. Broadcom will experience a drop in wireless chip revenue due to plunging smartphone sales. However, the transition and upgrade to 5G smartphones will be a key revenue driver for the firm in the upcoming quarters, making it one of the top stocks in the semiconductor space.

Broadcom's acquisitions in the software space, including its purchase of Symantec's enterprise business, will help it offset slowing chip sales amid the current volatile macro environment. Given the company's high profit margins (it expects an EBITDA margin of 55% in Q2), Broadcom is comfortable with its current dividend of $13 per share. In fiscal 2020, it aims to distribute $5.5 billion in dividends to shareholders.

Another semiconductor stock that is trading at a cheap valuation is Western Digital (WDC -2.11%). Semiconductor companies are part of a cyclical industry, making them volatile picks. Western Digital manufactures hard disk drives (HDDs) and NAND flash chips, making it a key player in the enterprise storage space.

NAND flash prices have fallen significantly in the last year due to the trade war and oversupply issues, as well as the industrywide transition from 2D to 3D chips. In October, Western Digital management said it was optimistic that NAND chip prices would rebound this year, but the recent market weakness dragged the stock lower.

Western Digital's revenue growth stabilized last quarter, driven by an improvement in flash memory prices. In the second quarter of its fiscal 2020, revenue was up 5% sequentially and flat year over year. Its adjusted earnings rose 82% sequentially to $0.62.  When it delivered that report, the company stated that it expected gross margin in flash memory to accelerate in the first half of this calendar year.

According to a TrendForce report, the manufacturing of NAND flash production bases has not been impacted due to the COVID-19 pandemic. In the December quarter, the company generated 43% of revenue from NAND-based SSDs (solid-state drives) and flash memory chips. A steady supply of memory chips should serve it in good stead.

There might also be a spike in memory chip demand from the PC and data center segments as an unprecedented number of people continue to work from home. However, will original equipment manufacturers purchase fewer chips and postpone product launches in these uncertain times?

Western Digital stock is trading at a forward P/E multiple of 6.1, making it one of the cheapest tech stocks to buy. The recent sell-off increased its dividend yield to a tasty 4.4%.

Though the company has not increased its quarterly payouts since 2015, its cyclical recovery should encourage investors. Western Digital has also stated that the COVID-19 pandemic will not have a material impact on the top line in the March quarter.

Both of these technology stocks have lost a significant amount of value since mid-February -- but so have most companies. The pullback in the stock prices has resulted in attractive valuations. Western Digital is trading at a price-to-sales ratio of 0.8 and has an estimated 5-year PEG ratio of 0.34. Broadcom, on the other hand, has a higher price-to-sales ratio of 4.7, but its low PEG ratio should make it attractive to value investors.

Broadcom and Western Digital have a huge market presence in their respective segments. Once the semiconductor industry recovers, these stocks will likely bounce back and gain significant momentum. Until then, investors can accrue passive income from their juicy, high-yielding dividends.