Please ensure Javascript is enabled for purposes of website accessibility
Log In Help Join The Motley Fool
Free Article Join Over 1 Million Premium Members And Get More In-Depth Stock Guidance and Research
By Bram Berkowitz - Updated Apr 16, 2020 at 11:03AM

Kashkari, who oversaw the creation of TARP in 2008, is calling for the big U.S. banks to raise $200 billion in capital and suspend dividends.

Neel Kashkari, president of the Federal Reserve Bank of Minneapolis, said the large U.S. banks should immediately raise $200 billion in capital to prepare for an incoming economic downturn.

"Raising that amount from private investors today, as a strong, preventive measure, would ensure that large banks can support the economy over a broad range of virus scenarios", he wrote in an op-ed in The Financial Times.

Kashkari, who played a major role in the creation of the Troubled Asset Relief Program (TARP), which was part of the U.S. government's response to the Great Recession in 2008, also said banks should stop paying dividends. 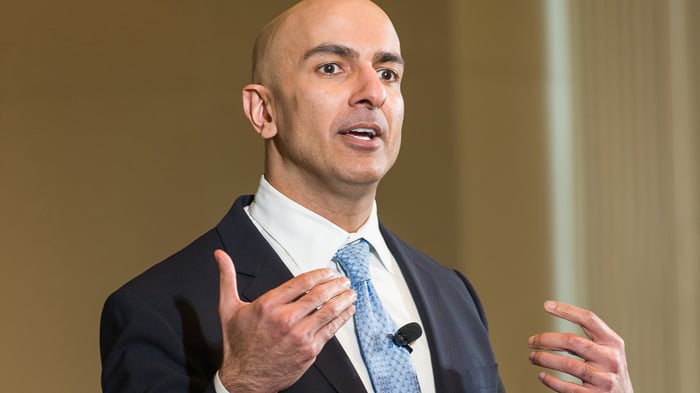 The statements come after most of the larger banks are reporting steep year-over-year declines in profits in the first quarter of 2020 in order to set aside cash for expected losses.

JPMorgan Chase reported a 69% drop; Wells Fargo reported an 89% drop and Bank of America and Citigroup both reported declines over 40%.

The reserves that banks have set aside to cover loan losses have also begun to chip away at their capital levels.

Recently, a report co-authored by the consulting firm Oliver Wyman and Morgan Stanley, said credit losses for global banks could jump to between $200 billion and $300 billion in a "deep global recession."

Loan loss provisions at five of the six largest banks in America are collectively already around $25 billion in the first quarter, roughly $5 billion higher than the linked quarter, according to The New York Times.

Kashkari said that if the expected recession doesn't turn out to be as bad as expected, banks can always return capital through stock buybacks and dividends.