Please ensure Javascript is enabled for purposes of website accessibility
Log In Help Join The Motley Fool
Free Article Join Over 1 Million Premium Members And Get More In-Depth Stock Guidance and Research
By Bram Berkowitz – Apr 17, 2020 at 6:00AM

The bank provided information about the effects from the coronavirus and its thoughts on the outlook of the company and broader economy.

Profits at JPMorgan Chase (JPM 4.52%) plunged 69% on an annualized basis in the first quarter of 2020, as the nation's largest bank prepares for incoming loan losses brought on by the novel coronavirus pandemic. The company reported net income of $2.9 billion, or $0.78 per share.

JPMorgan is one of the first companies to report earnings following a month of economic turmoil resulting from social distancing measures that have limited in-person interaction like never before. Here are five key takeaways from the bank's first-quarter results. 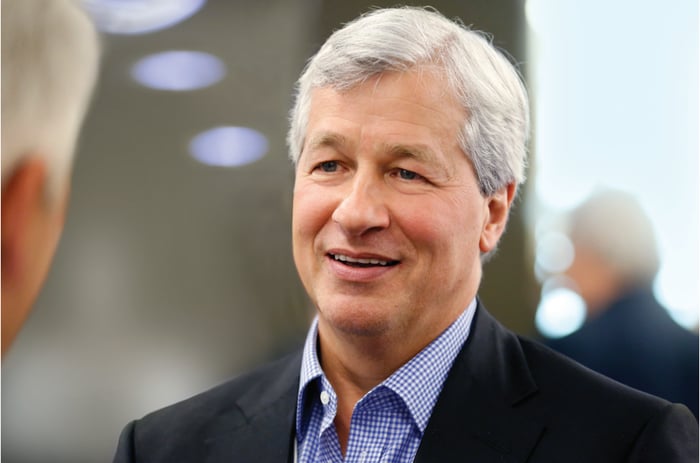 JPMorgan Chase CEO Jamie Dimon said that in an extremely adverse scenario, where GDP declines by 35% and unemployment rises to 14%, the bank might consider suspending its dividend. Image source: JPMorgan Chase.

Perhaps not surprisingly, JPMorgan is expecting significant future losses on loans. The company took a total provision credit of $8.3 billion in the first quarter, which represents the money the bank sets aside and adds to total reserves to cover potential losses. The provision increased by $6.9 billion from the fourth quarter of 2019. Of that new provision, $3.8 billion was set aside to cover projected losses in the bank's credit card business. Another $2.4 billion is being set aside to cover potential losses from the bank's wholesale banking unit.

Now, to be clear, many of those losses have not materialized yet because the bank's net charge-offs (debt unlikely to be collected) came in at about the same levels as previous quarters. But there are signs of credit deterioration. Total nonaccrual loans (those that are 90 days past due) rose 46% in total volume from Q4, and are up 13% year over year.

Since the coronavirus hit the economy hard in March, JPMorgan has facilitated the flow of hundreds of billions of dollars to help its customers bear the blow. The bank has allowed clients to draw on more than $50 billion on existing revolving lines of credit. The bank also approved more than $25 billion of new credit extensions in March alone. Through the Paycheck Protection Program (PPP) run by the U.S. Small Business Administration, JPMorgan has received applications from 300,000 businesses requesting $36 billion in total loan volume. That's 10% of the entire $350 billion allocated for the program. As of April 12, the bank has issued about $8 billion in PPP loans.

JPMorgan has also helped clients raise more than $380 billion through the investment-grade debt market. According to CFO Jennifer Piepszak, roughly 4% of the bank's mortgage customers have requested forbearance, although Piepszak added that numbers so far are "relatively small compared to what we think we'll ultimately see."

Not all was bad during the first quarter. The concerns from the coronavirus triggered a major market pullback, larger spreads, and a spike in volatility. This led to extraordinary government intervention, a huge shift in monetary policy, a sharp dip in treasury yields, and a decline in oil prices that ultimately produced record trading volume. Revenue from the bank's markets and securities service was $7.2 billion, up 32% from the same period in 2019.

The bank paid a quarterly common dividend in Q1 of $0.90 per share. However, CEO Jamie Dimon said in his annual letter to shareholders that in an extremely adverse scenario, where GDP declines by 35% and unemployment rises to 14%, the bank might consider suspending its dividend. An equally important metric to watch when it comes to the dividend could be the bank's tier 1 capital ratio, which measures the bank's core equity to its total risk-weighted assets. Banks have built this ratio up significantly since the Great Recession as part of enhanced banking regulation intended to stave off another financial crisis in the banking system. But as JPMorgan sets aside more capital for expenses such as loan reserves, its tier 1 capital ratio has fallen from 12.4% at the end of 2019 to 11.5% now.

One analyst on the company's recent earnings call pointed out that if the tier 1 ratio falls below 10.5%, an automatic restriction from the Federal Reserve would kick in, limiting how much the bank could pay out to shareholders from its eligible net income. Considering the bank expects losses to worsen, the tier 1 capital ratio could very well get down to this level, forcing the bank to at the very least consider cutting its dividend.

The bank projects annual net interest income of about $55.5 billion in 2020, a decrease of only $1.7 billion from 2019. The company also projects annual expenses to come in at roughly the same as 2019, but also expects credit reserves that cut into income to continue to build this year.

The outlook for the U.S. is a lot less rosy. Dimon said economists at the bank are now projecting GDP in the second quarter to decline by 40%, with unemployment rising to 20%. Economists also expect a recovery to occur later in the year, but the economy will still end the year down from where it began before the coronavirus.

An unknown in all of this, according to bank executives, is how effective the extraordinary government intervention such as stimulus checks and enhanced unemployment insurance will actually be. Will it, as Piepszak said, "bridge people back to employment," or simply push losses further down the road? Dimon said he expects social distancing measures to begin to relax in June, July, or August.