Please ensure Javascript is enabled for purposes of website accessibility
Log In Help Join The Motley Fool
Free Article Join Over 1 Million Premium Members And Get More In-Depth Stock Guidance and Research
By Zhiyuan Sun - Apr 17, 2020 at 10:36AM

A small-cap pharmaceuticals company may hold the solution to a nearly 100,000% drug price hike.

H.P. Acthar Gel is a corticotropin injection approved to treat 19 indications, including multiple sclerosis, rheumatoid arthritis, and infantile spasms. The anti-seizure drug often requires daily dosing, and only had a list price of $40 per vial in 2000. Fast forward 20 years later, the drug, now manufactured by Mallinckrodt (MNK) costs a staggering $38,892 for just one course of treatment, with no end in sight as to when the price will come down.

At the same time, patients who are in dire need of this therapy are being devastated by the price hike as Acthar is currently not covered by Medicare. Although the drug's patents have long expired, it has remained a trade secret that genetic pharmaceutical companies can't crack, until now. 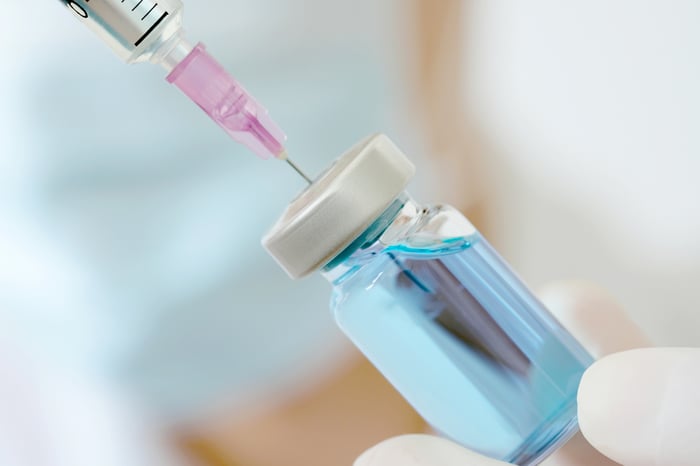 Just this week, ANI Pharmaceuticals (ANIP -4.04%) announced the Food and Drug Administration accepted its supplemental New Drug Application for a generic competitor to H.P. Acthar, known as Cortrophin Gel (a repository cortrophin injection). The product was widely prescribed between 1950s to 1980s for treating the same indications Acthar treats but was later discontinued.

With Acthar now having an astronomical cost, it became economically feasible to revive the commercialization of Cortrophin, which ANI acquired through lengthy transactions. However, the FDA requires a Prior Approval Supplement for Cortrophin before the drug can enter the market again. This requires ANI to develop standardized methods for extracting the drug from pigs' pituitary glands, and to reduce potential viral impurities in the compound, both of which the company completed in the first quarter of 2020.

Historically, the company has specialized in manufacturing both generic and branded drugs that treat a variety of illnesses, ranging from social anxiety disorder to breast cancer. The company has over 40 products currently in commercialization. If its Cortrophin sNDA is successful, ANI would be able to compete directly with Mallinckrodt's Acthar in a $950 million market, as estimated by the drug's sales in 2019. That's huge potential for a company that generated $206.5 million last year in revenue, and $61 million in EBITDA.

Although the opportunity is lucrative, there are a few caveats.

Limitations for shareholders to know

First, the product will likely launch 50% below that of Acthar's pricing, for both competitive and humanitarian reasons. Second, in a tiny sentence tucked away within the company's Securities and Exchange Commission filings in 2015, ANI stated it would be pursuing all of Acthar's label indications, except for infantile spasms.

Therefore, a much more realistic projection for sales of Cortrophin in the event of approval would be $50 million to $100 million. This was derived by applying a 50% discount to the total addressable market as per pricing competition, and then assigning a 40% to 45% risk discount for lack of infantile spasms exposure, and finally dividing by two (as there will be 2 products on the market). In context, the drug has the potential to add 25% to 50% annual revenue growth for ANI, which is nonetheless an impressive feat.

Moreover, the company's core generic business has been suffering headwinds due to the FDA's initiative to approve record numbers of generic drugs to keep prescription prices down. Hence, Cortrophin may present as a welcoming addition to shareholders frustrated with ANI's stunted growth.

On July 23, a panel of experts in the FDA will decide on the fate of Cortrophin. Regardless of whether or not the drug can proceed, however, shares of ANI possess an inherent margin of safety. The company is prudently leveraged with a 0.85x debt-to-equity ratio. In addition, ANI is trading at mere 9x price-to-earnings (non-GAAP) and has a small $500 million market cap.

Overall, the pharma stock presents an enticing opportunity for investors wishing to bet on growth, due to its large safety net in case this potential catalyst goes bust. Moreover, the opportunity to invest in a company that's trying to take down a 100,000% drug price hike represents ethical icing on the cake.