Please ensure Javascript is enabled for purposes of website accessibility
Log In Help Join The Motley Fool
Free Article Join Over 1 Million Premium Members And Get More In-Depth Stock Guidance and Research
By Billy Duberstein - Apr 17, 2020 at 7:56AM

One tech stock with an extremely compelling growth runway is European semiconductor-equipment maker ASML Holdings (ASML -1.80%). The company is the sole technology provider of extreme ultraviolet lithography technology (EUV), which is key in producing leading-edge semiconductors. In the future, EUV might also be used to produce DRAM memory.

During the coronavirus outbreak, the tech world has been unsure as to how semiconductors, and therefore the producers of semiconductor production equipment, might be affected. On the one hand, lower gross domestic product (GDP) from a recession should cause a downturn in consumer demand. However, the stay-at-home economy has also led to a demand spike in chip-heavy data center, gaming, and PCs.

ASML is one of the first tech companies to report earnings, which it did on Wednesday, April 15. At first glance, ASML's Q1 results came in much worse than it had initially guided for. However, a further look under the hood showed that this was due to supply delays and revenue recognition, not a decrease in demand, which appears to be going full steam ahead. That makes ASML a compelling pick today. 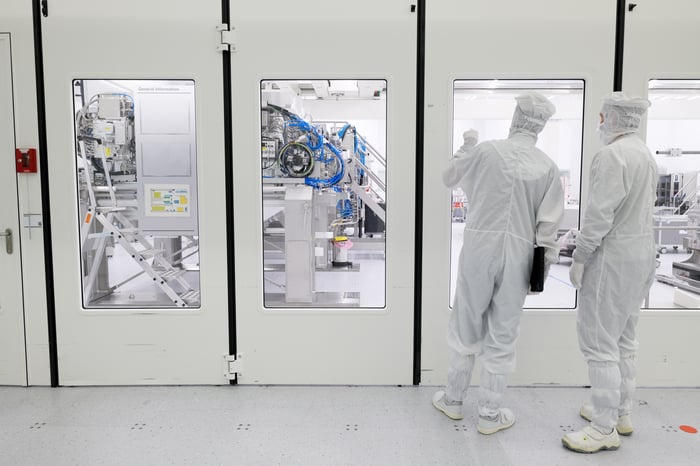 In Q1, ASML only made 2.4 billion euros, well below its initial guidance of 3.1 billion euros to 3.4 billion euros. At first, that might seem like a huge miss and a danger sign. However, management stressed the delay was entirely due to supply side delays, but not a lack of demand.

ASML couldn't ship some traditional deep ultraviolet machines (DUV) to Wuhan, China in the quarter -- for obvious reasons. ASML also had some trouble securing all of the parts it needed to build some EUV machines due to lockdown orders in certain geographies. However, those delays have since been resolved.

Finally, some customers asked for expedited shipping before factory acceptance tests could be implemented because they feared for supply chain issues. Though ASML shipped these extra machines, it prevented revenue recognition until the tests are done, which will occur in Q2 and Q3.

While some are still worried about ASML's growth prospects amid coronavirus, CEO Peter Wennink confidently said that the company had seen no letup in demand and ASML's order intake remains strong, up 28% versus the fourth quarter. Management even suggested second-quarter shipments could increase 50% over Q1 as orders fell from the first to the second quarter.

How is ASML's demand holding up so well? Chalk it up to ASML serving production of the most advanced, fastest chips, which are still in demand for data centers, gaming, and 5G rollouts. Meanwhile, lagging nodes for things like consumer electronics and smartphones could decline. Still, it doesn't appear that chipmakers are altering their technology roadmaps, as ASML's machines -- especially EUV -- are crucial to their competitiveness. From the earnings call:

[M]ost customers are still indicating that they are continuing relatively normal fab operations so far. Logic customers are currently continuing to ramp their 7 nanometer and 5 nanometer node in support of end market applications like 5G, AI and high-performance compute. There are also some positive signs being reported on data center demand as well as demand for notebook and communication infrastructure driven by the significant increase in work from home and virtual learning activities. These applications drive the demand for both Logic and Memory. However, it can also be expected that consumer related electronics demand, for example, smartphones may be under stress, in addition to the potential negative impact the COVID-19 crisis will have on GDP.

Adapting to the new normal

ASML also had some commentary on how its company is adapting to travel restrictions and social distancing. Obviously, ASML's research and development (R&D) teams still need to collaborate and work together, and service employees need to be able to access the advanced machines set up at customer fabrication plants.

ASML has gotten creative on that front. First, Wennink said he was "pleasantly surprised" at the productivity of the R&D teams working remotely, saying they even logged longer hours today while working from home. The company even has virtual cocktail hours on Friday nights with its team members.

Finally -- and this is pretty cool -- the company has begun using augmented and virtual reality, along with HoloLens headsets, to execute service calls on its machines for clients. Service calls on advanced machines are very technically intensive, usually requiring hands-on engineering and years of training. However, ASML has accelerated the pace of virtual and remote tools with great effect, it seems. That could make the company more efficient in the future:

[W]e have now over the shoulder 3D augmented reality support that service engineers with six months of training that would normally have to do this after two to three year training, were now operating and doing service actions with the support of experts that were sitting 6,000 kilometers away and basically providing them with 3D images, how they should do the service actions and it works. So this is also something that amazed us also.

The main takeaway is that ASML's equipment, which is necessary for making the most advanced chips coming out today, doesn't seem to be that affected as much by the coronavirus pandemic, despite the lower headline first-quarter results. Companies are still in need of the most advanced and fastest chips to remain competitive, as the stay-at-home economy needs lightning-fast connections, low latency, and dependability more than ever.

As such, the chipmakers and equipment makers that serve these markets are likely to survive, if not thrive through the crisis, while other more broad-based chip stocks could be left behind. That makes stock picking within the technology space more important than ever today.