Please ensure Javascript is enabled for purposes of website accessibility
Log In Help Join The Motley Fool
Free Article Join Over 1 Million Premium Members And Get More In-Depth Stock Guidance and Research
By George Budwell - Apr 17, 2020 at 7:29AM

Shares of the mid-cap biopharma Moderna, Inc. (MRNA 4.97%) spiked by as much as 17% in pre-market action Friday morning. The biotech's shares are surging this morning in response to a $483 million award from the Biomedical Advanced Research and Development Authority (BARDA), which is a division of the Office of the Assistant Secretary for Preparedness and Response within the U.S. Department of Health and Human Services.

This government-based financing will be used to accelerate the development of Moderna's messenger RNA (mRNA) vaccine candidate, mRNA-1273, against the novel coronavirus. This experimental SARS-CoV-2 vaccine is presently in an early-stage trial, which is being conducted by the National Institutes of Health. 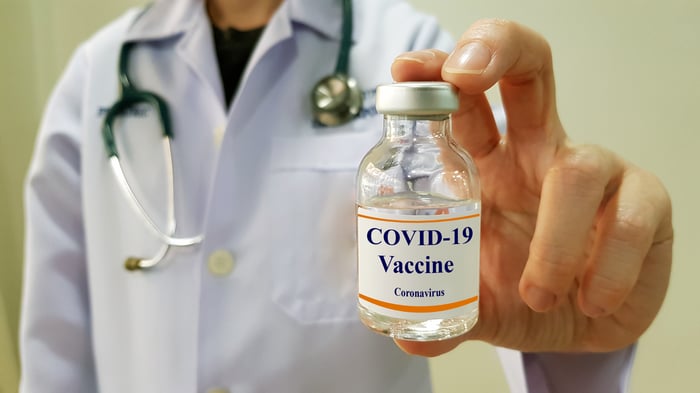 This rather large award should cover mRNA-1273's entire developmental costs all the way through to licensure by the Food and Drug Administration. That's a big deal because clinical-stage companies like Moderna tend to have enormous cash burn rates, forcing them to repeatedly dilute shareholders through large secondary offerings.

When will this vaccine be available for widespread public consumption? Moderna is hopeful that mRNA-1273 can enter into a late-stage trial by this fall. So, in short, this mRNA vaccine might hit the market by mid to late 2021 under a best-case scenario.

Is Moderna's stock worth buying on this news? Vaccine development is an extremely risky proposition. A lot can go wrong between now and the vaccine's regulatory review. As such, this clinical-stage biotech stock probably shouldn't be in your portfolio unless you have an above-average tolerance for both risk and volatility.