Please ensure Javascript is enabled for purposes of website accessibility
Log In Help Join The Motley Fool
Free Article Join Over 1 Million Premium Members And Get More In-Depth Stock Guidance and Research
By David Haen – Apr 18, 2020 at 8:10AM

The treatment landscape for kidney cancer has undergone a significant shift in the last decade. Between 2006 and 2009, the U.S. Food and Drug Administration (FDA) approved six drugs for renal cell carcinoma (RCC), the most common form of kidney cancer. A new slate of targeted therapies and immunotherapies arrived on the scene in recent years. The latest approach, combining both types of drugs, has yielded better outcomes for patients than ever before. 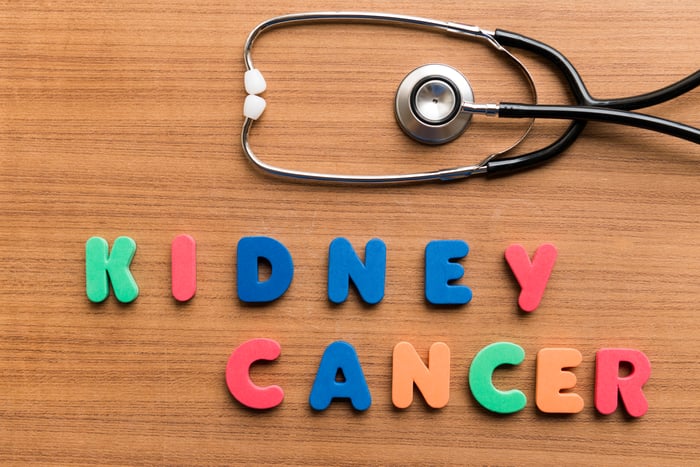 A bit of backgound

We'll get to the drugs, but first, a little about kidney cancer. According to the American Cancer Society, an estimated 74,000 people will be diagnosed with kidney cancer this year, making it a top 10 cancer in the U.S. RCC represents about 85% of all kidney cancers, and is most common in North America and Europe. Drug therapy is typically given for late stages of RCC where surgery is not an option, or following surgery to mop up any lingering cancer cells.

Sutent, a drug marketed by Pfizer (PFE 0.66%), dominated the RCC field. Considered the standard of care, Sutent generated more than $1 billion in sales annually. Even today, with many new treatments available, the blockbuster Sutent continues to be the comparator drug that the latest trials seek to outperform.

Exelixis: from single to combo

Exelixis (EXEL 1.32%) gained approval for Cabometyx to treat previously treated RCC patients in 2016. The FDA expanded that approval in December 2017 to allow for use in previously untreated, sometimes referred to as first-line, patients with the advanced stage of the disease. This came on the back of a successful clinical trial that showed a five-month survival benefit over Sutent.

The National Comprehensive Cancer Network (NCCN) lists Cabometyx as the only single agent "preferred regimen" for late-stage RCC in its treatment guidelines. Many oncologists and insurers follow the NCCN guidelines to aid in treatment and medical coverage decisions.

Cabometyx's life as the leading first-line therapy was short-lived. Bristol Myers Squibb (BMY 0.99%) bested Cabometyx with a combination of its immunotherapy drugs Opdivo and Yervoy. The results of the Checkmate-214 study, published in The New England Journal of Medicine, showed the two immunotherapies increased the progression-free survival (PFS), or time until the tumors grew more than a certain amount, by three months versus Sutent. The 18-month survival rate was 75% for the combination compared to 60% for those treated with Sutent.

Pfizer, with its partner the German company Merck KGaA, then reported data from its immunotherapy drug Bavencia in combination with its targeted therapy Inlyta. In 886 patients, the PFS was 13.8 months for the combination compared to 8.4 months for patients receiving Sutent.

Merck (MRK 0.80%) soon overtook Pfizer when it reported that its leading immunotherapy drug Keytruda, in combination with Pfizer's Inlyta, produced a median PFS of 15.1 months. The percentage of patients alive at one year was 89.9% versus 78.3% for the Sutent-treated patients.

Seeing the field shift to combination therapy, Exelixis teamed up with Bristol Myers to combine Cabometyx with Bristol's multi-billion-dollar immunotherapy Opdivo in RCC patients. The 701-patient pivotal trial, dubbed Checkmate 9ER, should have reached its completion date for the primary endpoint in February. Analysis of the data is likely ongoing and could be reported any day now, according to the National Institute of Health's clinical trial tracking site.

Biotech investors eagerly await the Checkmate 9ER study to see if it surpasses Merck's data. Should Exelixis and Bristol Myers outperform, then the two will once again take their place at the head of the line for treating advanced RCC patients.

Nektar Therapeutics (NKTR -1.14%) aims to harness the immune system by a different mechanism than Opdivo, Keytruda, and Bavencia. Nektar's bempegaldesleukin (bempeg) stimulates the immune system to generate cancer-killing T-cells and natural killer (NK) cells. One can think of bempeg as pressing on the accelerator, compared to the drugs above which release the brake.

Nektar forged a multi-billion-dollar partnership with Bristol Myers in 2018 to develop bempeg in combination with Opdivo. Bristol paid $1 billion upfront and bought $850 million of Nektar's stock to get the partnership rolling. Three pivotal phase 3 clinical trials are now underway with bempeg and Opdivo, including for advanced metastatic RCC. The combo will be compared to either Cabometyx or Sutent. While results are not expected until the end of 2021 or early 2022, the novel approach could move to the front of the line if successful.

Exelixis and Nektar, with their stocks on sale, provide interesting, albeit different, investment profiles. Cabometyx remains the preferred single agent oral therapy in the field and could be part of the latest combination regimen. However, Exelixis' stock could jump or dive depending on the outcome. Nektar's bempeg, with its novel mechanism and on-going pivotal trial, makes it more appropriate for speculative investors with a longer time horizon.