Please ensure Javascript is enabled for purposes of website accessibility
Log In Help Join The Motley Fool
Free Article Join Over 1 Million Premium Members And Get More In-Depth Stock Guidance and Research
By David Jagielski - Apr 19, 2020 at 7:45AM

Not all pot stocks are wildly volatile, and there are safer options out there for cannabis investors.

It's been a wild ride for pot stocks already in 2020. Last year, the Horizons Marijuana Life Sciences ETF (HMLSF -3.85%) fell by 39% while the S&P 500 soared by 31%. This year, the Life Sciences ETF is already down 35%, except this time the S&P 500 is also down by 11%. Unfortunately, some volatility is unavoidable as a result of the coronavirus pandemic. However, for cannabis investors who want to minimize their risk and look for safer options to invest in, there is a solution -- medical marijuana.

Some examples of stocks in this space include pharmaceutical companies like Corbus Pharmaceuticals (CRBP -1.57%) and Arena Pharmaceuticals (ARNA) that have drugs that utilize cannabinoid receptors. Another is Trulieve Cannabis (TCNNF -0.45%) a cannabis producer that's heavily focused on the medical marijuana segment, serving the Florida market where it has 46 dispensaries.

Here are three reasons why medical marijuana stocks are safer options for investors. 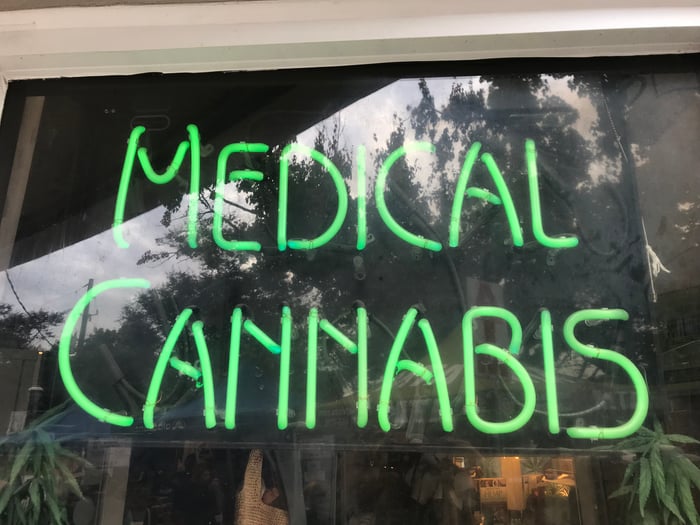 1. Medical marijuana is essential and demand should remain strong

During the coronavirus pandemic, individual state governors are deciding whether cannabis is essential and if pot shops can remain open within their states. But for many patients, medical marijuana isn't a discretionary expense; it's necessary for their health and wellness. And as concerns grow that drug shortages may be on the rise, demand for medical marijuana may actually increase as current non-marijuana users may look for alternatives, including cannabis. In Pennsylvania, the state is seeing a surge of new patients. At the Sanctuary Wellness Institute, doctors are fielding approximately 300 calls every day from prospective patients.

But even if demand doesn't increase, it should at least remain stable. In Michigan and in states across the country, there were wild swings in recreational pot sales during the month of March. But according to sales at Ann Arbor-based Exclusive Brands, the demand for medical marijuana remained steady.

Colorado's recreational pot market's been around since 2014 and is a lot more developed, and it says much of the same: Medical marijuana sales are more consistent. Data from 2019 shows that monthly medical marijuana sales were between a range of $24 million to $32 million. In contrast, recreational pot sales had a much wider range, from a low of $95 million to a high of more than $141 million.

There are more than 30 states in the U.S. that permit medical marijuana, but cannabis is only legal for recreational use in 11 states. And outside of Canada and Uruguay, no other country has legalized recreational pot, either. Much of the excitement and optimism surrounding pot stocks has been the potential growth and the potential opportunities that exist once legalization happens around the world. However, that's been moving at a snail's pace. Even though legalization has progressed in the U.S., there's still no sign that federal legalization of pot is imminent. It could still take years for that to happen.

There's more acceptability of medical marijuana around the globe than there is for recreational pot, and that's why it's a safer investment. Even in Asia, where countries are very conservative when it comes to cannabis, medical marijuana is making progress. South Korea was the first to legalize medical marijuana in 2018, and other Asian countries have since softened their views as well.

There are more places around the world for medical marijuana companies to sell pot to, and that makes them more diversified and safer investments than cannabis producers that depend on the growth of the recreational market.

Given their stability, it comes as little surprise that medical marijuana stocks are often more consistent in their returns as well. GW Pharmaceuticals (GWPH) is one of the top medical marijuana stocks in the industry, with its cannabis-based Epidiolex drug the only one approved by the Food and Drug Administration thus far. The drug got the OK from the European Commission last year as well, paving the way for more countries to permit the sale of Epidyloex, which is the drug's trade name in Europe.

Here's how GW has performed against some of the big-name pot stocks in North America since the start of 2020. 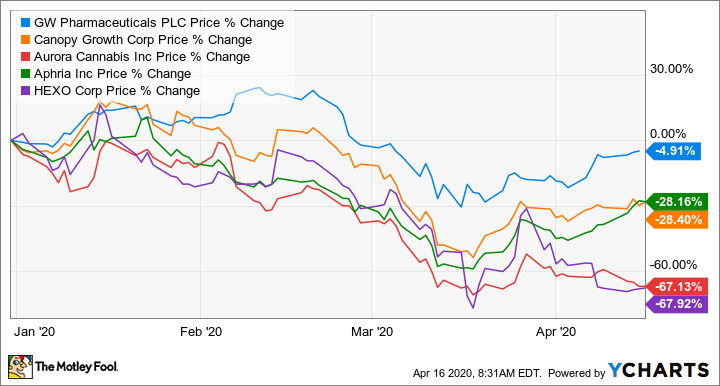 While the stock's suffered losses, they've been nowhere near some of the declines that other stocks have gone on this year. The other stocks sell medical marijuana products as well, but the difference is that GW's focus is on that segment of the market. Its growth depends on the growth of the medical marijuana segment, rather than the success of the recreational market, which is the case for many other cannabis stocks. That's why GW is a safer, more stable investment, and it explains why the stock hasn't been as erratic as many of its peers.

In short, if you're looking to cut down your risk and minimize your potential losses, investing in a stock like GW may be a safe bet. The company was near breakeven in 2019 with a net loss of just $9 million, and its revenue soared from $15 million to $311 million, largely due to the success and growth of Epidiolex. The company's focus on a more stable segment of the industry, coupled with strong financials makes the stock one of the better pot stocks that you can buy for the long term.