Please ensure Javascript is enabled for purposes of website accessibility
Log In Help Join The Motley Fool
Free Article Join Over 1 Million Premium Members And Get More In-Depth Stock Guidance and Research
By Leo Sun – Apr 20, 2020 at 9:53AM

The action camera maker might survive the pandemic -- but its business still faces brutal and unpredictable headwinds.

As part of a global restructuring effort, GoPro (GPRO 0.40%) last week stated it would lay off over 20% of its workforce to help it cut its operating expenses by $100 million this year and $250 million next year. CEO Nick Woodman said he also plans to forego his salary for the rest of 2020.

GoPro expects to take a charge of $31 million to $49 million from the restructuring, which will mainly impact its second-quarter results. To further cut costs, GoPro plans to mostly shift to a direct-to-consumer model and only continue selling to "leading retailers in key regions."

As part of the announcement, GoPro also provided its preliminary first-quarter numbers. Its revenue fell 51% annually to $119 million, broadly missing its previous guidance of $140 million to $160 million. However, it expects its adjusted loss to meet its previous forecast for a loss of $0.30 to $0.40 per share.

GoPro withdrew its prior full-year guidance, which expected flat revenue growth and 67%-108% growth in non-GAAP earnings, in light of the COVID-19 pandemic. These developments seem dire for GoPro stock, which had already shed over 90% of its value over the past five years. Can this company (and its stock value) survive the pandemic? 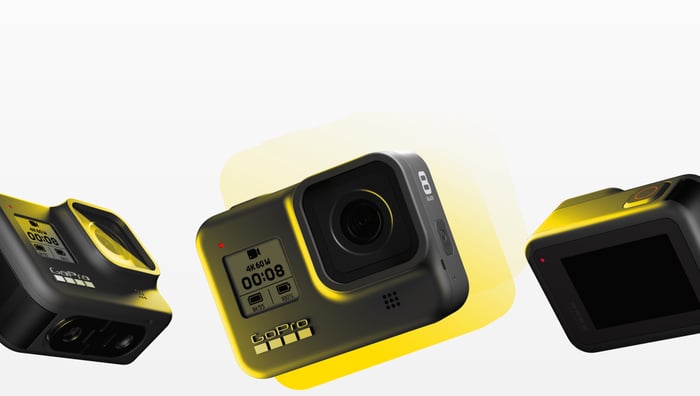 What happened to GoPro?

GoPro's growth withered for three simple reasons: Its upgrade cycles were long, it faced competition from cheaper action cameras and better smartphone cameras, and it couldn't gain momentum beyond its niche market of outdoor enthusiasts. Here's how the company fared over the past year.

GoPro's growth recovered in the fourth quarter after it finally launched the Hero 8, and its focus on selling higher-margin devices and cutting costs seemingly paid off. However, GoPro's preliminary first-quarter numbers suggest its recovery could be short-lived.

How badly will the pandemic hurt GoPro?

With lockdown, social distancing, and stay-at-home measures in effect all over the world, GoPro's core market of outdoor enthusiasts isn't going to buy new cameras anytime soon. GoPro also likely won't benefit from the sudden boom in video conferencing, which is better served by webcam makers like Logitech.

Meanwhile, cheaper smartphones with good cameras, like Apple's (AAPL 1.73%) new iPhone SE, could render stand-alone action cameras obsolete. Smartphones are also naturally tethered to cloud backup services, like Apple's iCloud, while only a tiny percentage of GoPro's users are paying for its GoPro Plus cloud service.

GoPro held $125 million in cash and equivalents at the end of March, down from $150 million at the end of December. It didn't provide an update on its marketable securities, which dropped 67% annually to $15 million in the fourth quarter.

GoPro's long-term debt rose 7% annually to $149 million in the fourth quarter, but it won't face any maturities until 2022. It can easily pay the 3.5% interest on those notes from its existing cash in the meantime, even if its net loss ($15 million in 2019) widens significantly in 2020.

In short, the pandemic won't bankrupt GoPro. Meanwhile, GoPro's cost-cutting measures, restructuring plans, and focus on selling higher-margin cameras through direct-to-consumer channels could stabilize its bottom line throughout the crisis.

GoPro will survive, but it probably won't thrive

Over the past few years, GoPro developed fewer new cameras, laid off staff, and reduced its operating expenses to stay solvent. That financial discipline should help it weather the COVID-19 headwinds, but its core business still faces intense competition from cheaper cameras, smartphones, and its own older cameras.

Simply put, GoPro trades at about a tenth of its IPO price because there's no real path for long-term growth. Instead, it will likely run out of ways to cut costs as its revenue growth gradually dries up.