Please ensure Javascript is enabled for purposes of website accessibility
Log In Help Join The Motley Fool
Free Article Join Over 1 Million Premium Members And Get More In-Depth Stock Guidance and Research
By Matthew DiLallo - Apr 20, 2020 at 10:40AM

Regional oil prices have fallen so far that companies have no other choice.

Oil prices in Canada have historically sold at a discount to those in the U.S. because the country doesn't have the pipeline capacity to get all its production to market centers. That pricing disconnect, however, has widened considerably this year because demand for crude has cratered from the COVID-19 outbreak. Western Canadian Select, the main pricing benchmark for oil produced in the oil sands region, recently traded at a record low of less than $3 a barrel. At that pricing level, it's unprofitable to produce in the country.

In response, Energy companies are beginning to shut in facilities. These moves, however, while painful for producers in the near term, could accelerate the industry's ability to recover, since it will prevent this oil from piling up in storage. 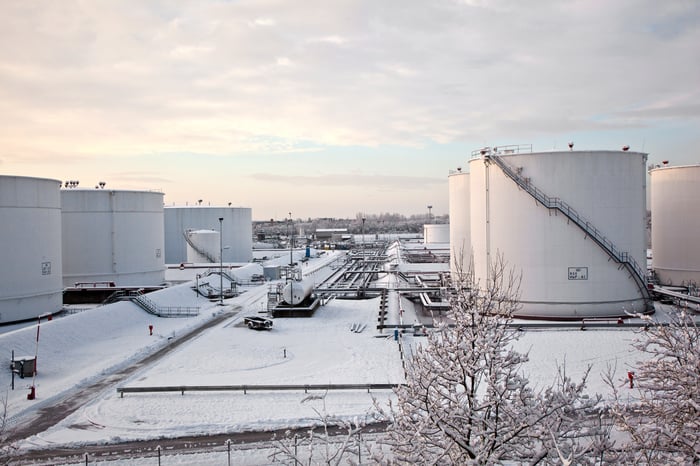 From a gusher to a trickle

Last week, ConocoPhillips (COP -0.67%) and partnering French oil giant Total (TTE 1.52%) said they would voluntarily curtail some production at their Surmont oil sands facility in Western Canada. They're currently cutting back the output of that facility and expect that by May they will have reduced it by 100,000 barrels per day (BPD). That will push Surmont's supply down to 35,000 BPD. ConocoPhillips also plans to shut in 125,000 BPD of production in the U.S. starting next month because of low oil prices and storage constraints.

Cenovus Energy (CVE -1.88%) has also voluntarily reduced some of its output in Canada. It reduced production at its Christina Lake facility by 40,000-45,000 BPD in response to low oil prices and infrastructure constraints. On top of that, the company slashed spending on new oil projects, which will result in a roughly 6% decline in its total production this year.

More cuts, either voluntary or mandatory, are needed

Several other Canadian producers are contemplating production reductions. Leading producer Canadian Natural Resources (CNQ -0.75%) said it will support a federally mandated supply reduction to help ease the industry's infrastructure constraints and the impact of low oil prices. Cenovus Energy, likewise, is in favor of a mandatory reduction to prevent oil from filling up the country's storage capacity.

Other leading producers, like Imperial Oil (IMO 0.11%), however, don't like the idea of a government-ordered curtailment. Imperial would prefer that the free market force higher-cost producers to shut in their output instead of an across-the-board cut.

Whether voluntary or forced, analysts believe that a lot more Canadian supply must come off the market because of infrastructure constraints. Morgan Stanley, for example, sees a supply cut of between 900,000 BPD to 1.5 million BPD needed because North America is quickly running out of room to store oil. RBC, meanwhile, sees an output reduction of as much as 1.7 million BPD, or one-third of the country's total production, to address the storage issue.

If the industry doesn't deeply cut its production in the coming weeks, then oil prices will keep falling and could eventually go negative. That scenario could force producers to cut more than their output. Several will probably need to reduce their dividends so they can preserve cash. Cenovus has already suspended its dividend, while analysts see the potential for reductions at Imperial, Canadian Natural Resources, and Suncor Energy (SU -0.53%) if market conditions don't improve.

The industry could prevent that scenario and quicken the eventual recovery by significantly reducing output in the near term. That move would prevent unneeded oil from piling up in storage, which will give the economy time to use up what's already there. That would help ease the pressure on prices, enabling them to quickly recover to a more comfortable level once demand picks back up.

Canada doesn't have the infrastructure needed to handle all the oil it's producing, which has put intense pressure on prices. That's leaving companies with no choice but to begin reducing their output. The faster the rest of the industry makes this difficult decision, the less strain they'll put on its already stressed infrastructure. Conversely, the longer producers wait to cut supplies, the more likely that they'll put so much pressure on the system that prices will remain lower for even longer, which will force more producers to slash their dividends.