The company plans to submit its pruritis drug for FDA and EMA approval later this year.

Shares of clinical-stage biotech Cara Therapeutics (CARA -3.64%) rose 4% Tuesday after the company reported successful results from a phase 3 trial of its lead drug Korsuva for pruritis, or severe itching, in hemodialysis patients. Based on the results, Cara and its partner, Fresenius Medical Care (FMS -4.38%) plan to submit a new drug application to the Food and Drug Administration and a marketing authorization approval to the European Medicines Agency in the second half of the year.

The KALM-2 study tested Korsuva injections in 473 kidney disease patients undergoing hemodialysis and who suffered from moderate to severe pruritis. The trial enrolled patients in the U.S. and overseas and was similar to the company's KALM-1 trial, which had been limited to U.S. patients and which concluded successfully last spring. Korsuva met its primary endpoint in KALM-2, with 54% of the subjects reporting an improvement in an itch score after 12 weeks, compared with 42% of the placebo group. 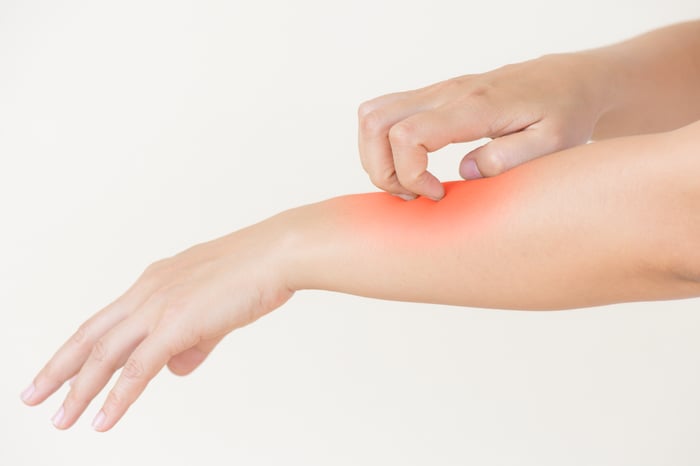 The unusually high placebo response and a failure to meet a secondary endpoint related to itch-related quality of life could have spelled trouble for the drug, but the results cleared the hurdle of statistical significance, and Cara believes that the combined results of the two trials give it a strong case to present to regulatory agencies.

There are 500,000 dialysis patients in the U.S., and 30% to 40% of them experience moderate to severe pruritis, a condition that seriously impacts quality of life, and for which there are no FDA-approved treatments. Cara is also testing an oral formulation of Korsuva, and is conducting phase 2 trials of the drug in patients with chronic liver disease and atopic dermatitis.