Please ensure Javascript is enabled for purposes of website accessibility
Log In Help Join The Motley Fool
Free Article Join Over 1 Million Premium Members And Get More In-Depth Stock Guidance and Research
By Evan Niu, CFA – Apr 21, 2020 at 8:00AM

Last week, Apple (AAPL -1.35%) finally announced its mid-range second-generation iPhone SE, leaning on the familiar playbook of putting high-end specs in a recycled chassis. At $399, the device is competing aggressively and represents a significant threat to mid-range Android devices, including the forthcoming Pixel 4a that Alphabet subsidiary Google is expected to announce imminently.

The iPhone SE release, which was delayed due to the coronavirus outbreak, comes as Apple is also expected to launch a handful of 5G-equipped flagship iPhones in the fall. 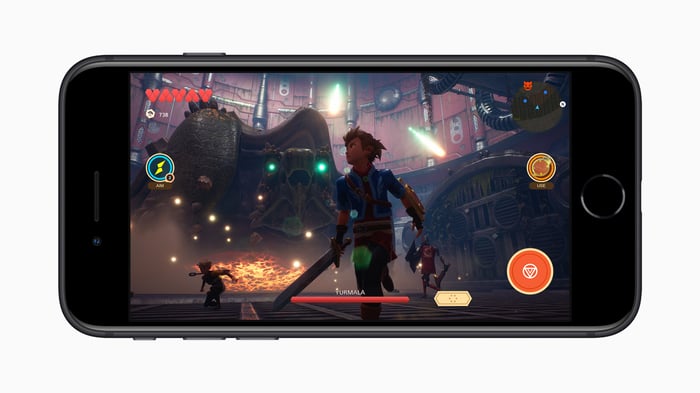 The most powerful mid-range iPhone Apple has ever made

In a research note last week, Counterpoint Research estimated that Apple will end up selling over 15 million iPhone SE units this year. "While many markets have shifted focus onto the 5G smartphone race, Apple delivers one last shot at mid-range 4G LTE before finally shifting toward a 5G-heavy portfolio," according to Counterpoint Research analyst Hanish Bhatia.

While wireless carriers are already starting to deploy 5G coverage, that cellular technology is unlikely to reach mainstream consumers for another few years. Apple will probably have two to three years before most 4G LTE users make the jump to 5G, according to Counterpoint. The researcher goes as far as to say that the iPhone SE will probably end up being the Mac maker's mid-range "cash cow" during that time frame.

The A13 Bionic chip is an absolute powerhouse, and Apple wasn't exaggerating when it said last fall that it was the most powerful processor ever put into a smartphone. However, Qualcomm's newest Snapdragon 865 was able to beat  the A13 Bionic in a benchmark late last year. Benchmark methodologies vary and don't necessarily capture real-world performance, but the key difference is that the Snapdragon 865 will only be found in expensive premium Android flagships instead of mid-range handsets.

The $399 iPhone SE should theoretically offer the same performance as a $1,449 iPhone 11 Pro Max, and Counterpoint expects the A13 Bionic chip's inclusion will contribute to Apple's booming services business. By incorporating the latest and greatest silicon, the iPhone SE will be able to handle ongoing software updates for several more years while facilitating things like augmented reality (AR) and 3D games in Apple Arcade, among others.

Counterpoint estimates that Apple can generate approximately $2,400 of customer lifetime value over the next 30 months from power users, most of which comes from various services.

It's all about services

Apple's services segment represented 18% of revenue last year, and investors are finally started to appreciate the company's efforts to diversify away from the iPhone. Services revenue is highly profitable and Apple likely hit its goal of 500 million paid subscriptions in the first quarter. Apple finished 2019 with 480 million paid subscriptions and has been consistently adding 30 million per quarter for over two years.

Releasing the aggressively priced iPhone SE that will simultaneously help boost services revenue while crushing competing Android handsets is quite a potent strategy.