Please ensure Javascript is enabled for purposes of website accessibility
Log In Help Join The Motley Fool
Free Article Join Over 1 Million Premium Members And Get More In-Depth Stock Guidance and Research
By Daniel B. Kline – Apr 21, 2020 at 8:40AM

The company's shares have taken a beating (for good reason).

Carnival Cruise Line (CCL -23.25%) has been hit as hard as any company by the coronavirus. Its operations have shut down entirely -- as has the entire cruise industry -- and its Princess brand has suffered even more with passengers becoming infected with COVID-19 and a number of them dying.

Revenue has essentially stopped for the company. It's now operating under a Centers for Disease Control (CDC) order to halt all sailings for 100 days (or until certain conditions are met), and it remains uncertain as to how willing consumers will be to take cruises even when they are allowed to.

This pileup of bad news has sent shares of the company plummeting from their 52-week high of $56.04 to $12.22 per share before the market opened on April 21. Carnival, however, has tapped $3 billion from its revolving credit facility. It has also raised $4 billion at a hefty 11.5% interest and has sold another $2 billion in stock. 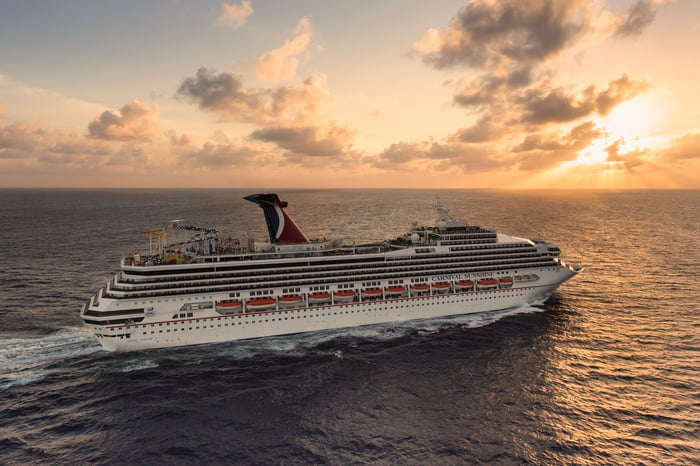 It costs Carnival roughly $1 billion a month to keep its fleet shipshape for whenever it gets a green light to sail again. That means that as bleak as things are (and paying an 11.5% interest rate is very bleak) the company can go nine months without needing to raise more cash.

CEO Arnold Donald believes he has his company well positioned to survive the coronavirus pandemic. He also fully believes that customers will return.

"It's been devastating temporarily ... Travel is going to return, travel and leisure, and when it does, we'll return with it. Social gathering at some point will return, and when it does, people will want to cruise," Donald said on CNBC's Closing Bell.

On one hand, that sounds like wishful thinking. The CEO, however, backed it up with his next statement:

"We've had substantial bookings. Bookings for 2021 are strong," he said.

Donald did not share any numbers. Saying bookings are strong for 2021 without data to back it up makes the statement less convincing, but hearing Carnival's CEO say it offers a small flicker of hope for investors.

Consumers may be both unable to and afraid to sail right now. If they're booking for somewhat far-off dates, however, they're not so scared that cruises are something they won't even think about doing.

Remember that it's very easy to book a cruise right now. Prices are low, and Carnival, as well as the other major cruise lines, is offering cancellation until 48 hours before a ship sails.

That gives consumers peace of mind, but it also creates uncertainty for the company. Bookings may not always equal going on a trip the way they once did (cancellation without travel insurance was generally impossible), but the fact that people will even consider cruising is somewhat encouraging.

Should I buy Carnival stock?

If you fully understand the risks, then Carnival may be worth taking a small position in. While it seems likely that cruising will resume at some point over the summer, there's no guarantee of that. An extended shutdown could put Carnival in a precarious position where even with its $9 billion in cash, a strategic bankruptcy makes sense.

In a bankruptcy shareholders generally get wiped out. That's a real risk even though, at the moment, the company has more than enough cash to make it through.

Carnival was a profitable company. It can likely be one again, but it could take years to dig out from under its new mountain of debt.

If you invest, be prepared for rough seas and a very long journey. Buy shares if you're prepared to hold them for years -- maybe even a decade -- before you see anything close to the cruise lines' previous highs.